The Lenovo H50-50 Desktop is a budget mainstream desktop meant for casual use both at home and at the office. It packs a versatile Haswell Intel Core i3 processor (a quad-core chip capable of base clock speeds of 3.2GHz and turbo of up to 3.4GHz) and 8GB of memory.

It is capable of handling most tasks but isn’t much of a challenge for today’s systems with 8th Gen processors. While it strikes a good budget price point at its current price tag, Acer’s Aspire TC-885-NESelecti3 Desktop offers a better price to performance balance. The latter remains our Editor’s Choice for budget mainstream desktops. 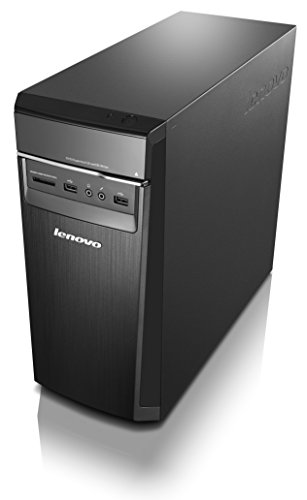 The Lenovo H50-50 Desktop is for a lack of a better word, a stealthy PC. It looks more like the type of computer your parents would hide under the desk. But underneath its low-toned boring look is an interesting array of components mostly meant for mainstream use. I’m talking about home and office use such as web browsing, emailing, multimedia storage, Microsoft Office, watching movies and anything in between.

Under the hood is a 3.2 GHz Core i3-4460 processor, 8GB DDR3 memory, 1TB mechanical hard drive, and an integrated graphics card. With an 8GB memory, this PC is powerful and should be able to handle most tasks you throw at it.

Although the processor is a bit dated for 2019, it still has some juice left in it and should be able to serve for a long time to come. In this review, we the Lenovo H50-50 desktop down and access how well it compares to other budget PCs in its price range. Is it still worth buying even with other budget PCs around? Are there other alternatives? Let’s find out.

American tech giant Lenovo is known for making PCs, laptops and other devices, but the company is revered for its long-lasting battery, great-keyboards laptops. Today we review an expertly crafted mid-tower mainstream desktop meant for users looking for computing power for their daily tasks. The chassis is made of all matte-black textured finish and a black/gray plastic front panel. The side panels are all clean without any trace of massive grilles for ventilation or see-through glass panels like some gaming desktops we’ve seen in the past.

Getting to the interior requires a Phillips head driver to loosen a few screws at the rear and bottom of the PC. The panel slides off after loosening the screws. Inside, it’s easy to see there’s plenty of space for expansion. The cable management is well done, nothing too fancy like in gaming desktops. But it should work just fine.

The motherboard holds an 8GB DDR3 memory leaving room for an extra slot. So, you can always upgrade the memory to 16GB. Additionally, there’s a vacant PCIe slot available meaning you add your dedicated graphics card. 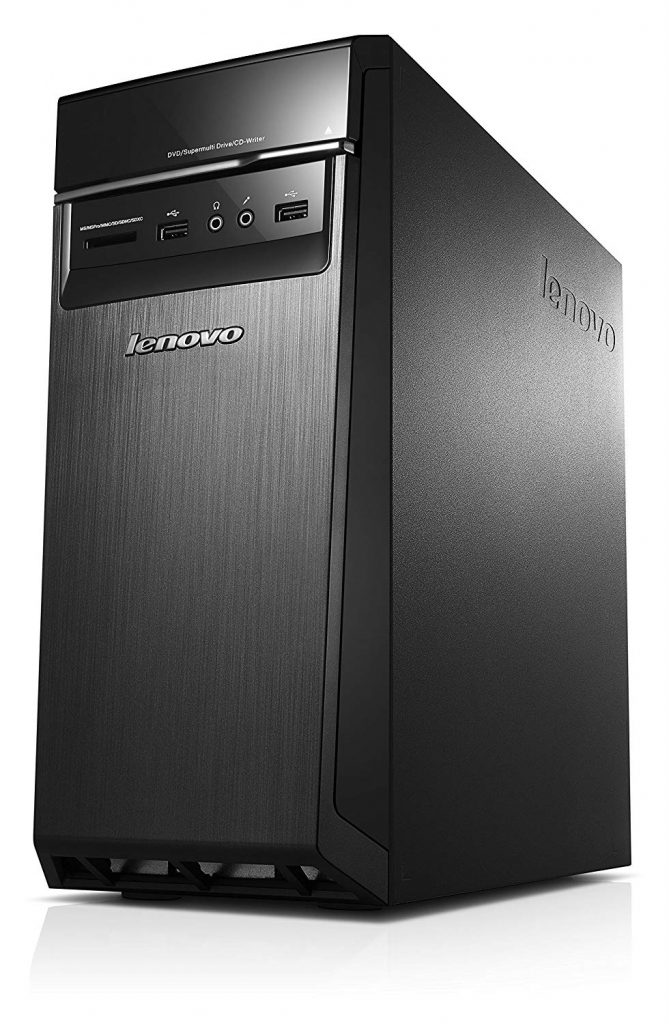 The front and top panel holds a couple of ports including a DVD burner tray. Just below are a host of other ports well positioned for easy access. There are two USB 2.0 ports, headphone and microphone jacks, and a 7-in-1-card reader.

Meanwhile, the rear houses a few more ports and connectors. You will find two USB 2.0 ports, two USB 3.0 port, a VGA and HDMI out connector. If you spent some time tinkering with computers you know that the VGA and HDMI make connections to external monitors possible. You can have a double monitor setup thanks to these connectors. Also, because there is no discrete graphics card, there is no DisplayPort for this unit.

One of this PC’s biggest caveat is the lack of futuristic ports like USB Type-C. It would have been great having either that or a Thunderbolt port. Other connectivity options include a built-in 802.11A/C Wireless + Bluetooth

You shouldn’t expect workstation-class performance from this PC. But with the help of a Core i3-4460 processor, the H50 is capable of handling the most demanding home and office tasks. The Core i3-4400 is a 4th Generation processor based on Haswell architecture.

It comes with 4 physical cores with a base clock speed of 3.2GHz and turbo boost of 3.4GHz. For the most part, the processor, although old school, is enough for any basic workload. I mean tasks such as web browsing, streaming video, displaying data, watching movies and anything in between.

However, since CPU advancements have raised the bar higher than it used to be, you can get a more powerful CPU for much less. That means there are desktops out there in the market that can handle more complex and demanding tasks for a fraction of the cost. For instance, if you’re planning on editing media or holding web conferences for business with multiple participants, you need a PC that’s better specced for your expectations.

Enter the Acer Aspire TC-885-NESelecti3 Desktop, our Editor’s Choice for mainstream desktops. It packs the latest 8th Generation processor, the 8th Gen Intel Core i3-8100 (6-core) CPU, 8GB DDR4 memory, 1TB HDD and all for a fraction of what our unit sells for. Additionally, it can handle some of the most strenuous tasks you’ll throw at it.

Moving on to the memory, you need enough of it to move things along smoothly. The Lenovo H50-50 has a relatively dated processor but redeems itself with the 8GB DDR3 memory. 8GB is in most occasions considered the sweet spot for memory.

You can get so much done with 8GB memory and it doesn’t cost too much to get it. It should allow you to handle office productivity (large document work, heavy multitasking), and web browsing (heavy 30 tabs open). Also, it should have you covered on media streaming, basic photo editing (1-10 photos) and some light gaming. (online games). To be precise, it’s more suited to playing solitaire and watching videos.

As far as storage goes, the Lenovo H50-50’s 1TB mechanical hard drive is neck-to-neck with most PCs in the price range. Generally, storage is a space where you have to set expectations around. If you’re a serial downloader and need plenty of storage for your downloads, the 1TB available is plenty.

Playing games video requires a modicum of GPU horsepower, and that’s not something we’ve seen much of on PCs with integrated graphics cards. Case in point, our unit which comes with the integrated Intel HD 4600 card. That goes to say this is not a gaming PC.

While it does offer buttery smooth experience playing solitaire and other less demanding games, you will need a discrete Nvidia GeForce or AMD Radeon graphics card for gaming. If you really have to game without the GPU, then consider keeping the graphics at low/medium 720p settings for a reasonable gaming experience. At that setting, you should get at least 30 fps at 720p for most games.

There are more than a few reasons why the Lenovo H50-50 desktop is a viable mainstream desktop. It’s not a behemoth of a PC but it is a fine utility PC reliable enough to depend for everyday tasks. From first glance, the build quality reflects a good balance of elegance and subtlety. Inside it packs an Intel Core i3-4400 processor, 8GB DDR3 memory and 1TB HDD storage perfectly capable of getting work done. For us, it is a competent low-powered desktop for casual home and office use.

At the price point, the Lenovo H50-50 desktop sells for, there are more than a few options one could consider. Like we mentioned in the performance section, the Acer Aspire TC-885-NESelecti3 Desktop is a great choice that sells for slightly shy of $500.

It saves you $100 and yet you get a modern 8th Generation i3-8100 processor, 8GB of DDR4 memory and similar 1TB mechanical hard drive. The main difference between the two is that Acer can handle more intensive tasks and multitask harder. Meanwhile, Lenovo is bottlenecked by it’s biggest caveat; the 5th Generation i3-4460 processor.

Well, if you don’t mind buying a 5th Generation processor and previous generation memory (DDR3), then the Lenovo H50-50 desktop is a PC you can go for. Otherwise, we recommend the Acer Aspire TC-885-NESelecti3 desktop for its performance perks and budget price point.