The Acer Aspire TC-885-NESelecti3 Desktop makes its debut as an affordable compact desktop. It best suits users looking for a plug and use desktop for home tasks, and one proficient for general tasks such as home entertainment, web browsing and anything in between. Compared to previous models, it delivers an outstanding performance thanks to the latest Intel Coffee Lake processor and 8GB memory.

We loved it for its palatable price point and easy to upgrade interior and components. While at its current state you won’t be able to game in it, it’s a great value desktop nonetheless.

A good processor is the centerpiece of every good build and manufacturers like Acer know that all too well. When Intel released it’s new Coffee Lake processors, Acer was among the many PC manufacturers on the front line to upgrade their systems. And the result, new systems with modern design, flashy components and an 8th Gen CPU at the heart of it all. The Acer Aspire TC-885-NESelecti3 Desktop is one of such systems that recently rolled into our labs.

With an upgraded processor, Acer had to make a few adjustments to the design. It’s nothing too different from its previous models considering a few aspects are maintained. I’m talking about a compact and easily accessible interior, visible vents for air circulation and enough room for expansion. All these come together to make desktop tasteful enough for wide appeal.

In this review, we dig deeper to find out why the Acer Aspire TC-885-NESelecti3 Desktop offers as good value as advertised.

Aesthetically, the Acer Aspire TC-885-NESelecti3 strikes a good balance of style and restraint. The chassis is split diagonally into two zones with the right zone hosting the DVD drive and port system. The chassis is made of smooth matte black finish with ventilation strips on its left side panel. There is no simmering LED lights sipping through the strips as is common in gaming PCs like CyberPower and iBuyPower.

Unlike modern chassis designs, the Acer Aspire TC-885-NESelecti3 requires a screwdriver to remove the side panels. The screws hold the panel are just two so it won’t take much to get them off. Inside, the interior is put together with functionality in mind. Cable management is decently done and a 300-watt power supply is visible next to the motherboard.

There’s enough space to expand should you need to in the future but you will have to contend with the slightly tight case. Speaking of expansion the desktop has three SATA3 ports, two are used by the HDD and optical drive. The motherboard comes with the following expansion options:

At 13.8 x 6.4 x 13.4 inches and 16.2 pounds, the Acer Aspire TC-885-NESelecti3 is a compact desktop. It’s no different from other Acer Aspire TC-885 desktops in terms of size but varies in weight due to the different configurations (some have graphics units). To be more precise, the desktop is at the bottom end of standard towers. It’s nothing close to a small form factor desktop but definitely small. The great it won’t break your back moving it around the house or office when the need arises.

The mix of front ports comprises of an SD card reader, USB C port, “red/always hot” USB 3.1, another USB 3.1, a headphone slot, and a microphone slot. The back panel is also home to 2 HDMI ports, a single VGA connector, 4 USB 2.0s, 2 USB 3.0, Ethernet and sound ports. Since the Acer Aspire TC-885 doesn’t have a dedicated graphics card, there is no DisplayPort. However, you can get one once you upgrade to a dedicated GPU.

As for in-box accessories, the desktop flaunts a simple USB keyboard and mouse which are not remarkable. They, however, get the job done. Other connectivity options include 802.11ac Wi-Fi and Bluetooth 5.0.

The main highlight of this section is the Coffee Lake processor. We’ve seen in a few recent desktops how the 8th Generation “Coffee Lake” has remarkably improved general speed. That is most especially in multi-core reliant tasks such as media projects – and the Acer Aspire is no exception here. The Acer Aspire TC-885-NESelecti3 sports an Intel Core i3-8100 with four cores and 3.6GHz operating frequency.

The cores don’t benefit from Turbo Boost (no-overclock) which means you get a static frequency. This is great for power consumption because it won’t need more power than the stock cooler requires. Also, one of the downsides is that the i3-8100 could yield lower performance in lightly-threaded workloads. The upside is that the fours cores translate to bigger and better performance on heavily threaded tasks. As a result, the extra cores use more power hence the CPU is packed with a 65W TDP. 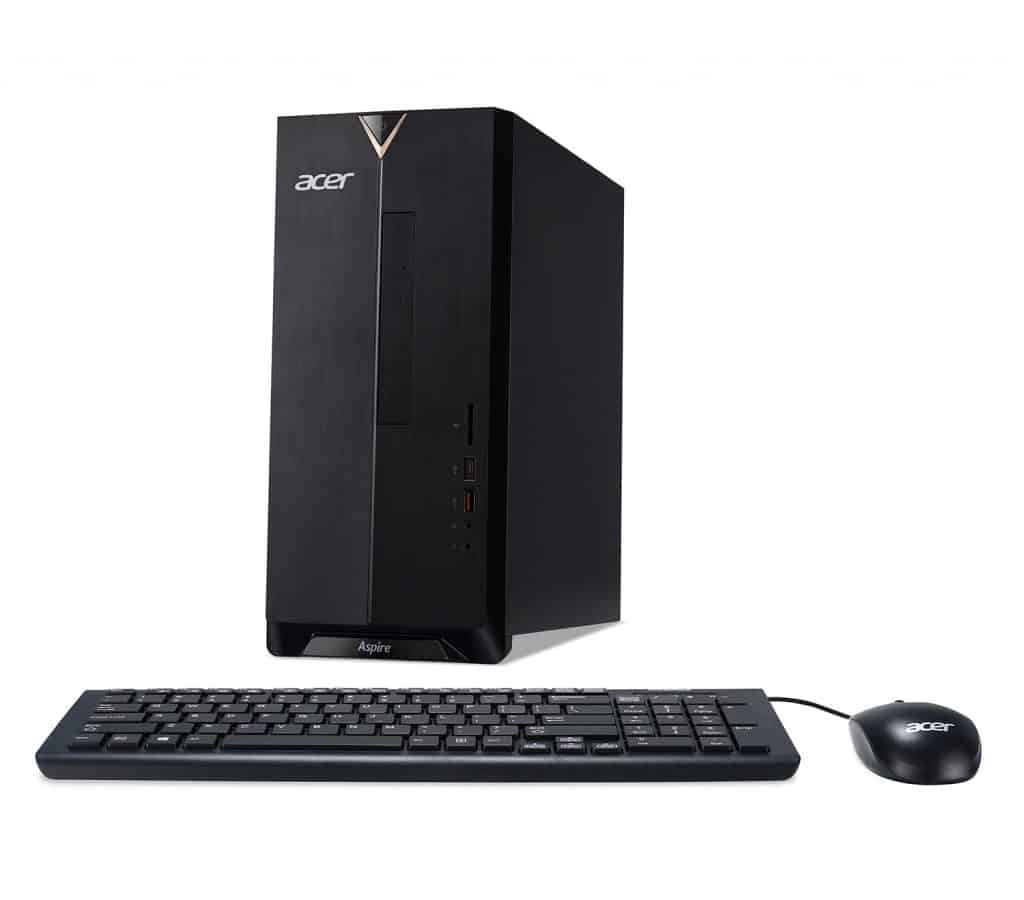 A good example of a chip that directly compares with the i3-8100 is the AMD Ryzen 5 2600 processor. The i3-8100 has the advantage of a cheaper price tag but loses the performance battle to AMD’s Ryzen 5 2600’s 6 cores and 12 threads. Even so, the i3-8100 is all-around productivity and multitasking king that sells for a budget. For the record, it is the lowest in the Coffee Lake line-up so you can always opt for other higher-end iterations desktop if need be.

Our unit packs an 8GB DDR4 RAM and 1TB mechanical hard drive. 8GB is mostly considered the gold standard of memory capacity because it’s the middle ground. You can get so much done with 8GB memory and it doesn’t cost too much to get it. It should allow you to handle office productivity (large document work, heavy multitasking), and web browsing (heavy 30 tabs open). Also, it should have you covered on media streaming, basic photo editing (1-10 photos) and some light gaming.

The bright side for both the memory and storage is they can be upgraded at any time.

1TB hard drive storage is also pretty decent. In most cases, it is enough for storing data, games, multimedia, and programs. Be that as it may, upgrading to SSD storage, particularly to 120GB – would make a WORLD of difference. The Operating system (OS) would boot faster and programs load in less time. If you also need to constantly retrieve your data, the SSD should help in fast data retrieval.

For this system to be capable of playing modern AAA gaming titles it needs a graphics card. But Acer only included an integrated UHD 630 graphics cards which make the Acer Aspire TC-885-NESelecti3 Desktop a mainstream unit. You would need a dedicated graphics card to be able to game on this PC. Just so you know, the i3-8100 processor is the lowest in the configuration of 8th Generation processor.

That aside, since the system comes with a UHD Graphics 630 it is not capable of gaming. Perhaps only a few casual online games and on very low frames per second (fps). As it is, we then recommend including a dedicated graphics card, for instance, the GeForce GTX 1050 or the Nvidia GTX 1060. Whichever you go with, you will have to upgrade the 300W power supply. The plus side is without the graphics card, the system consumes less power, produces less heat and the system runs quietly.

Productivity on a Budget

First of all, the price of the Acer Aspire TC-885-NESelecti3 Desktop is appealing. The price alone gives the desktop an inviting aspect which most budget users looking for a productivity system want. Looking at that coupled with the Intel Core i3-8100 processor, 8GB DDR4 and 1TB storage, the system is well configured. Although not the strongest in its class, it delivers a good balance of price and performance for daily tasks. It won’t game but if you have the extra budget and experience you can upgrade it to a gaming rig.

Under this price range, there are a couple. Acer offers a configuration of our unit where you can opt for the features you want to be included. You can choose a bigger memory, higher-end Intel processor or option with solid state drive storage.

So as seen you have a variety of options, I will be updating this article with other alternatives for the price point. Otherwise, the Acer Aspire TC-885-NESelecti3 Desktop is a solid choice for home and office tasks.