The Lenovo Ideacentre 300 desktop is a top form budget desktop with decent build quality and scads of connectivity options. It isn’t exactly a powerhouse but it delivers fully functional PC performance – which means you are certainly able to do web browsing, stream online videos, work on office documents and manage routine productivity tasks.

It isn’t particularly spectacular at anything and is short on memory but for the price, it makes a great budget desktop. 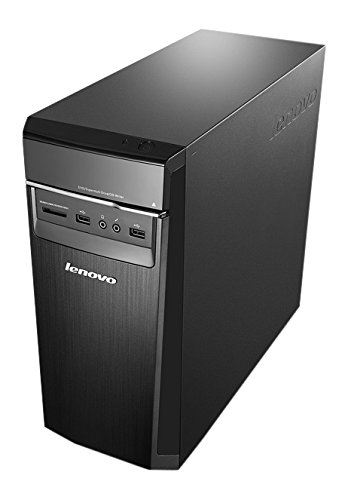 Most casual home and office users don’t really need a large desktop for their day-to-day tasks. Large and slightly obtrusive desktop chassis with a themed case more than often are gaming and those can be overbearing. In this Lenovo Ideacentre 300 (90DA00LPUS) Desktop Review, we explain why this might just be the desktop for the casual student, parent, and web-browser user.

It’s lightweight and won’t take much of your desk space so you get to enjoy that extra space at your office cubicle.

The whole body of the Lenovo Ideacentre 300 (90DA00LPUS) Desktop is black with an angular glossy front panel. Nothing about it is overbearing or screams for attention; the aesthetics make it a little more subtle among premium desktops.

Lenovo offers a keyboard and mouse as part of the package. The keyboard is evenly spaced and features individual curved keys for comfort while typing. It generally is a great keyboard and reliable for long hours of grind… Lenovo certainly excels in keyboards and this one isn’t any different.

There are plenty of ports to go around on the Ideacentre 300; well distributed at the front and rear. In total, there are four USB 2.0 ports and two USB 3.0 ports. The front panel is home to two USB 3.0 port, headphone jack, microphone jack, an SD-card slot (SD-CARD R/W) and optical drive (DVD RW drive).

The rear holds the first assortment of USB 2.0 ports (two), two other USB 3.0 ports, an HDMI port for monitor connection and VGA-in and VGA-out ports for connecting to an older version.

Other connectivity options include an onboard Gigabit Ethernet port, Bluetooth and an 802.11ac Wi-Fi.

Lenovo runs on a 3.7 GHz Intel Core i3 -6100 (dual-core) chip and 8GB RAM which builds a solid foundation for basic office/home functionality. The Core i3-6100 is a middle-class CPU based on the 14nm Skylake architecture with a base clock speed of 3.7GHz and 4MB of L3 cache.

It does not offer Turbo boost, thus it is limited to the base clock speed. However, that may not necessarily be a bad thing as it may sound to some. 3.9GHz is pretty fast – sufficient for most programs and light games.

Further, thanks to the 14nm architecture that it’s built on, its consumer’s power quite economically than other high-performance rigs at only 51W TDP.

Integrated to the processor is the Intel HD Graphics 530 unit, which has 24 executable units and 250 – 1050 MHz clock speed. This is better than most affordable Core i5 chips such as the Core i5-6400 with a clock speed fixed at 950MHz. These two along with 8 GB of RAM make gaming possible – with games such as FIFA 18, Destiny 2 and Need for Speed Payback playing comfortably at low settings.

We appreciated the 1 TB Hard drive storage which offers plenty of space, more than sufficient for the everyday home user. The hard drive touts a sturdy s 7200 rpm speed and advanced threading which allows it to handle multitasking swiftly. But the Ideacentre doesn’t include a solid-state drive(SSD) which ideally is the main caveat.

So booting up is slower than expected and it handles application slightly slower than premium desktops. Still, if you value speed over mass storage volume, you may opt to replace the mechanical hard drive with a solid-state drive. This will, of course, make your machine super fast and even more enjoyable to use.

Also, if you were planning to expand you should rethink that thought as the Ideacentre 300 doesn’t feature any extra drives or expansion slots for expansion. The power supply also doesn’t give room for an upgrade.

While still on PSU, Lenovo offers 180 WATTS which is ceiling amount. It is generally a basic desktop in specs intended for light office work users. The system works swiftly thanks to a clean installation of the Signature Edition of Windows 10 Home operating system.

On the gaming scene, the Lenovo Ideacentre 300 doesn’t promise much either. The graphics card is an onboard Intel Graphics 530 chipset which is light years away from gaming, but fortunately, that isn’t a reason why this desktop is sold for.

Refer to the table below.

The Lenovo Ideacentre 300 desktop is a basic yet quite decent desktop. It is an entry-level machine with low power consumption, small footprint and able performance suitable for web browsing, office work, and graphical tasks. The onboard graphics card can support basic games quite well, along with other graphics-intensive tasks such as Auto CAD, Solidworks, and Photoshop.

Additionally, it is easy to set up, is quiet and compact enough to fit on your desk while working. The Acer Aspire TC-780-AMZKi5 desktop cost relatively more but provides slightly better specs than our reviewed unit – making it worthy of your consideration.

Regardless, the Lenovo Ideacentre 300 (90DA00LPUS) Desktop makes a respectable machine that we can comfortably recommend to you.