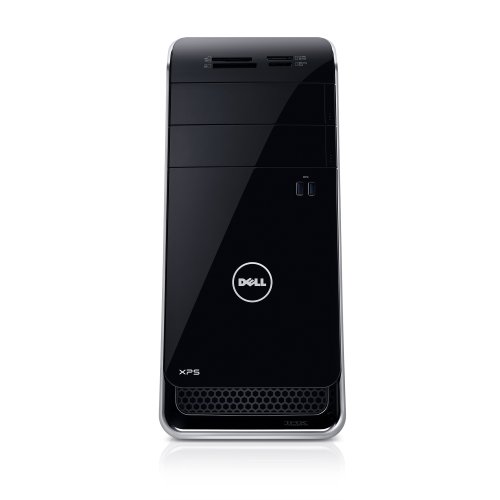 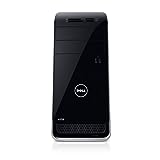 The Dell XPS X8900-1444BLK Desktop is a great PC for users looking for respectable horsepower, plenty of storage (easily upgradable) and a VR capable system. This new Special Edition XPS touts of that and more (a well-arranged interior and cable system). Best of all, it is a highly functional PC for entry-level gaming and offers the opportunity of upgrading it for better performance.

Getting the XPS x8900 for less than a $1000, like our reviewed unit, is a deal. But if you’re like me, who prefers higher performance, upgrading the system power supply unit will make it an even sweeter deal. Also, VR enthusiasts, especially Oculus Rift should have a ball with this PC.

Our one subtle caveat is that while the Dell XPS x8900 fits the bill as the poster child for budget VR computing, it offers the lowest recommended Oculus Rift specs which while works perfectly now, might be rendered outdated in a few years.

Who is this PC for?

One of the major upsides of the Dell XPS x8900-1444BLK desktop is that it is attractive, in a low-toned kind of way. Its black plastic front panel and matte finish give it a touch of simplicity only suited for the modest at heart. Also, it packs a decent set of components that enable it to handle everyday computing tasks and mainstream entry-level gaming with flair.

So, where am I heading with this? The Dell XPS x8900 is a great creation for VR enthusiasts, but it should also appeal to the budget user and entry-level gamer looking for an affordable prebuilt system they can update in the future.

Dell maintained the all but a couple of the underlying concepts from the Alienware gaming desktops, one of which isn’t design. The Alienware brand and the Dell XPS 8900 share a list of attributes including a wealth of ports, tool-less access, and easily upgradable system.

What Dell intentionally left out with this XPS 8900 was the imposing style, form factor, and function that the Alienware gaming rig brings to the table. While the Alienware’s design looks and feels like a rejected sci-fi movie prop, the Dell XPS X8900-1444BLK's design is a bit toned down.

But that doesn’t mean that the XPS 8900 isn’t sexy. No, it has a metallic frame shrouded in cleanly black polished plastic. In fact, the front panel is glossy and elegantly curves at the top in a bold fashion. Meanwhile, the front panel edges are lined with a sleek silver border adding a breath of originality to the design.

The bottom panel is crowned with honeycomb-like vents which complement the side panel vents or the right-hand side of the PC. The side panel isn’t transparent as other gaming desktops we’ve seen. It vents double up as grills to expose the green glow of the graphics card; marketing stunt common with gaming PC manufacturers!

So How Big is This PC?

At 16 x 17.5 x 7.3 inches is not the gaming tower we expected to look down on other traditional gaming PCs. The XPS 8900 is less bulkier than the Alienware Area 51 (22.4 x 25.2 x 10.7 inches) and the Origin PC Millennium (21.4 x 24.8 x 9.75 inches). That means it shouldn’t be a problem trying to fit it on your squeezed office desk or underneath your living room table. For the size it comes in, it should work with the almost all-space-constrained-office without presenting gaudy PC stresses.

You need a healthy set of ports and easily accessible ones to make a PC appealing and useful to its target audience. The XPS x8900 shows some promise here with 2 USB 3.0 ports and USB 2.0 ports at its front porch. The USB 3.0 ports come useful for plugging in your favorite gaming pads, smartphones, and other peripherals.

As if not enough, Dell made sure the front is better in one more additional way. Unlike most gaming desktop, the front panel also has four memory-card slots(SM/XD, CF/MD, SD/RS/SDXC, and MS/Pro Duo). This goes to show that the Dell XPS x8900 is as much a gaming desktop as it is a business PC.

Moving on, the rear offers a plethora of options too. There are four USB 3.0 ports, two USB 2.0 ports, an Ethernet jack and a host of surround-sound audio inputs. Also, the GTX 730 card provides some more video ports including a single HDMI port, three Display ports, and one DVI port.

Other connectivity options included are 801 802.11bgn Wi-Fi and Bluetooth tied to the wireless card. Dell also includes a complimentary wired keyboard (Dell KB216 Wired Keyboard, English) and mouse (Dell Laser Mouse). For sound, there’s an Integrated 7.1 Audio but no dedicated Speakers to work together with.

You will have to get a set of your own speakers for music and theatre. Also, it is worth noting that the desktop PC does not come with a monitor. So, we recommend the budget AOC E2260SWDN Monitor which we reviewed recently.

Dell also included an Optical drive on this PC just in case you still need to use a DVD/CD as extra storage. Let’s face it, DVDs were commonly used to burn music and movies. Not everyone will admit to doing this vice, but I’m sure you know one or two shady friends who did/still do it. While the optical drive is slowly being phased out by online gaming website stores like Steam, it remains as a lifeline for other users. So, thank you, Dell, for remaining true to users around the world who haven’t made the shift.

It should come as no surprise that the components of the PC support Full HD (1920 by 1080p). The 6th Generation Intel Core i7-6700 Processor might not be a render monster, but combined with the 8GB DDR4 memory it crunches numbers quite remarkably. Fortunately for this PC, there is a graphics card bundled in with extra memory (Nvidia GTX 730 with 2GB DDR3).

In addition, the XPS 8900 works with an 8GB DDR4 memory on-board which for the most part is the average amount available for home and business desktops. 8GB is sufficient to handle such tasks, simple games and a bit of multitasking. But for users looking to do more professional work, play more demanding games and handle more multitasking tasks, 16 GB is a great choice of upgrade.

I’m talking about professional programs, engineering software created to handle difficult large-scale projects, photoshop projects and graphics intensive games. These require nothing short of the 16GB and if that’s not enough, you can even opt to upgrade to 32GB or more. The Dell XPS x8900 motherboard supports up to 64GB comfortably.

For gaming, the Nvidia GTX 730 graphics card comes into play. It is a fairly standard card and as such is capable of handling some of the older gaming titles. For users looking a completely premium gaming experience, this is the component that mostly needs to be kicked out. They’ll almost certainly be far better of lifting their ambitions to a better performance graphics card such the Nvidia GTX 1060 or at least Nvidia 1050Ti.

A slow gaming PC can always be helped by updating some of its components, in this case, the GPU. Just uproot the graphics card, replace it with a new one and poof, all your poor gaming performance is gone! But getting that done is not that blatant.

While it might not be exactly obvious to everyone, upgrading your PC is one of the easiest concepts. But because of those who might need help, we won’t hesitate to give it. Dell’s design is tool-less and as such you don’t need any tool to get to the interior. All you need is to unscrew the nail (can be done with hand only) to get it open.

Once you have your graphics card ready (Nvidia GTX 1050 Ti or GTX 1060), you can go ahead and start the process. Inside, you will have to unscrew a couple of screws held firmly to the case. Next, change your GPU, plug it back in, screw it back to place and finally update your drivers. That’s the whole process in fast forward. Watch the videos below simply for you.

Dell included a 460watts PSU for this unit, therefore, providing an extra 225 watts for expansion especially for HDD and SSD. Upgrading to a heavier duty graphics card beyond GTX 960 will require more power so it’s advisable to go for at least 600W power supply unit.

Is There a Better Alternative?

Now, I won’t start dissuading anyone from getting this PC because as Y’all might know, there’s always a better option for every product. At least if you look closely enough and know where and how to look. For the Dell XPS X8900, I have a few options available and I only list them because they’re an investment that won’t break your bank too much. I fact compared with the XPS 8900, they are affordable options.

If you don’t mind brand names and are not loyal to them then the CYBERPOWERPC Gamer Xtreme VR GXiVR8060A5 Gaming PC might just please your pallet. For a shocking price of less than $850, you get a six-core Intel processor ( Intel Core i5-8400 2.8GHz), better motherboard (Intel B360 Express Chipset) 8GB DDR4 and more storage including solid-state (120GB SSD | 1TB HDD ).

With this option, you won’t have to upgrade the power supply and graphics card because they’re enough. If your work involves a lot of demanding programs and tasks, the only upgrade you might need is another 8GB stick to bring it to 16GB RAM.

The second option is the CYBERPOWERPC Gamer Xtreme GXIVR8020A5 Desktop Gaming PC. It also offers a better price tag, better than the Gamer Xtreme VR GXiVR8060A5 and of course our reviewed XPS 8900 unit.

However, it offers AMD components when it comes to the graphics card ( AMD RX 580 4GB) and an Intel i5-8400 6 Core Processor. For the price difference, you lose the SSD. All in all, it is also an impressive deal worth considering.

Are the Options Oculus Rift Ready

According to Oculus, there are minimum and recommended specifications. The options we recommend fit the bill of the required specs as well as some of the recommended specs. So if you do opt for any of the two, you should be fine in the long-run.

In conclusion, the Dell XPS components don’t pass the test for hardcore gamers looking for an insanely ripped gaming rig. However, it ticks all the right checkboxes for heavy everyday multitasking and light entry-level gaming. A 6th Gen Intel Core i7 processor combined with Nvidia GTX 730 graphics card are a great combination but don’t make a lethal heavy duty gaming rig.

As far as upgrading goes, the 3.5mm drive bays should come in handy while upgrading the Solid State Drives. Dell XPS allows up to 32GB of memory should you need that much (which we consider overkill) but for casual use and a bit of gaming, bumping it up to 16GB should be enough to handle such tasks.

One of the upsides of this PC is upgradability and that translates to more power uptake on components especially the graphics card. With the current power supply at 460 watts, you can upgrade the hard drive storage and GPU to at least GTX 960. For other higher-end graphics, it would be advisable to upgrade to a 600watts power supply.

All in all, the Dell XPS x8900 is an unassuming desktop computer with all the perks of a daily computing PC and VR capable rig. Just don’t forget of the inherent risks of owning a low-end Oculus Rift requirement PC in this fast-developing tech world. It just isn’t VR future-proof.

Fancyappliance.com is a participant in the Amazon Services LLC Associates Program, an affiliate advertising program designed to provide a means for sites to earn advertising fees by advertising and linking to Amazon.com.