Today we review the iBUYPOWER Trace 9220 Desktop , a gem in the rough, glinting in every perspective. It packs a strong feature set of plenty of powerful components that should easily satisfy any buddying gamer and tinkerer. And best of all, it’s cheaper than assembling a PC on your own.

The included Six-Core Intel i7-8700K processor, 16GB DDR4 RAM, storage and Nvidia GeForce RTX 2070 graphics card are ample for modern-day tasks. They should get you through any trenches in the battlefield, power you through VR and give you enough oomph for that upcoming Photoshop assignment you have. Let’s dive in deep to find out how the Trace 9220 Desktop performed in our review. 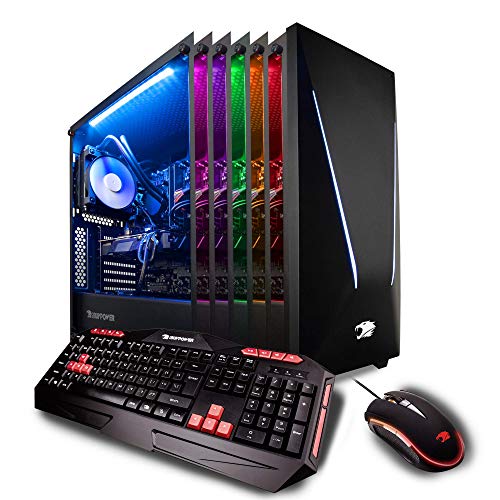 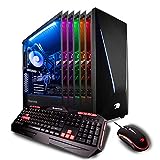 The iBUYPOWER Trace 9220 Gaming Desktop is a solid solution for users looking for an affordable entry-level gaming PC without having the skills to build one. In addition to its budget price, level-headed specs, it serves a Windows 10 Home Operating system and the performance of an e-sport demi-god. It also has better aesthetics compared to most iBuyPower PCs we’ve reviewed.

Which means compact chassis, glass side panels, and space for expandability. We also loved the water cooling which is a nice touch for keeping the thermals on the down-low.

With more similarities than differences to other OEMs we know of (CyberPowerPC, SkyTech), the iBUYPOWER Trace 9220 Desktop has a glass side panel to see through into its innards. Its design isn’t as loud and ostentatious as other gaming

Desktops we’ve seen, but it’s certainly more dramatic than an ordinary home or business desktop. Like its predecessor model the iBuyPower Slate 9210 and iBuypower Slate 9200, the tower case is big and boxy with plastic exterior shrouding the metallic frame.

The plastic exterior is black with a flame-wreathed lion head logo at the front face. Compared to past design in the iBuyPower lineup, this iBuyPower looks a bit more tacky with two strips of pulsating LED lighting complementing the front.

Also, the side panels are a little more sophisticated with improved side panel vents for optimized airflow. As if not enough, iBuyPower made the ceiling better by including an easily removable magnetic dust filter for both efficient airflow and to prevent dust.

Thinking about expansion, opening the iBuyPower Trace requires no tools. There are two thumbscrews holding the side panel in place. Viewing inside reveals the meticulous done internal cabling, water cooling solution and extra room for expansion.

There are 4 DIMM slots should you need to upgrade the memory further than 16GB and two M.2 sockets supporting PCIe slots. But we consider that overkill for entry-level gaming and home productivity tasks. Brian Westover explains how much RAM is sufficient and why. Give that article a read.

To enable external monitor connections, better yet your double or triple monitor setup is the HDMI, DisplayPort and DVI connectors. Our review unit also featured 802.11ac Wi-Fi and Bluetooth connectivity.

We noted the absence of a slot-loading DVD burner on the front panel which might be a downside for some. The larger majority, however, the lack might be not-so-worrisome tradeoff considering DVDs and physical media are slowly and the world is slowly accepting online storage and downloadable formats as alternative storage.

Inside the iBuyPower Trace 9220 desktop is a recommendable amount of specs to sustain a robust gaming experience. It packs an Intel Core i7-8700K processor with 3.7GHz capable overclockable up to 4.7GHz. That is all thanks to the six cores available. The processor comes in with the bragging rights of having the highest performance and multitasking capacity for its category (compared to AMD’s Ryzen).

On paper all that sounds glamorous but it’s even better in performance. It makes a solid combination for professional tasks such as working on office documents, heavy multitasking, web browsing, media streaming, photo, and video editing and gaming.

As for storage, there’s plenty of it as we mentioned earlier on. The 1 TB hard drive storage is great for data hogs and users looking to save multimedia and games. It comes with 7200RPM spindle speed which is currently the standard for high-end HDD storage.

We appreciate the solid-state drive too. 256GB is a decent amount that will come in handy by making booting up process snappier. One can also expect impressive loading of applications and games and sequential write performance.

Brandishing an Nvidia GeForce RTX 2070 graphics card, our reviewed unit naturally comes with a performance that knocks on the doors of the high-end GPUs. I’m talking about Turing architecture graphics performance that adds 4K gaming handling capabilities and of course a higher price tag to the table.

If you were wondering what difference there is between our reviewed unit and the older model (iBuyPower Slate 9200 and Slate 9210), the graphics card is most definitely the culprit here. The Nvidia RTX 2070 is substantially a more premium and pricier GPU to the older models, and alone will set you back by a whopping $599.

So if you’re still with me up to this point, then that’s great. I’m sure the biggest question in your mind right now is what is Turing and Ray tracing is? And how does it come in to play here? So AMD introduced a new series of cards featuring GeForce RTX 2080 and 2080 Ti.

Well, the Nvidia RTX 2070 is the third and last (was last to be launched) of these cards built on Turing architecture with Ray tracing and AI capabilities. It brings to the table immense realism and performance to modern games essentially bringing tomorrow’s tech to today’s gaming.

So what is Ray Tracing and how does it help?

Without getting too deep, the Turing architecture is the most forward-looking architecture ever built by AMD after Nvidia GTX 1080 architecture. Aside from being the biggest architectural leap in AMD and the technology world, it has a few tricks up its sleeve like Ray tracing. Ray tracing is a graphics rendering technique that uses advanced rasterization to make images appear more real.

Turing architecture combines Ray tracing with AI algorithms to make images physically accurate not only of games but also for professional applications. That way it can both be used while gaming and in a professional setting such as photo editing.

Compared to its predecessors, it came as no surprise that the Nvidia GeForce RTX 2070 slots in just above  GeForce GTX 1080 in performance. Nvidia admittedly confirms its new TU106-powered board is more advanced than GTX 1080 or Ndia GTX 1070 in every game at 1080p, 1440p, and 4K.

And on our gaming test runs, the Nvidia GeForce RTX 2070 makes this statement boldly with higher frame rates. It thrives on 2560 x 1440p settings and of course averages 1080p video play impressively even at Ultra settings.

The iBUYPOWER Trace 9220 Desktop is a powerful gaming PC and it sells for a fair price for the components it packs. On performance circles, the system performs admirably both on VR, Photoshop, and gaming. It gets impressive frame rates on 1080p Ultra settings and offers a great measure of expandability if you desire more hardcore-enthusiast-performance.

Finally, one last feature we loved is the impressive design that allows for expandability and perfect airflow. The removable magnetic filter and improved side vents are a nice touch too. As a result, we easily recommend it as our Editor’s Choice for budget entry gaming desktops.

link to How to Clean a MacBook Screen

Apple offers some of the best laptops out there. However, their beautiful Retina displays are prone to smudges and fingerprints that can ruin your visibility if you let them build up. So, how do...

Continue Reading
link to How to Clean Thermal Paste Off CPU

Thermal paste is an essential but often overlooked component that keeps your computer cool and functioning. Old thermal paste can reduce heatsink cooling performance, so if you notice your...