If you’re looking for a desktop computer that fits the bill as the base of your computing needs, you don’t need to look far. The Dell XPS 8930-740BLK Tower Desktop ticks the right boxes for home computing and entry-level gaming. 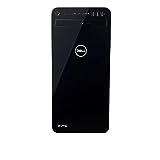 This unit sports the best and highest specifications of the Dell XPS 8930 series thanks to an 8th Gen Intel Core-i7-8700 processor and middling Nvidia GeForce GTX 1050Ti graphics card.

In spite of GPU prices skyrocketing, the XPS 8930 culminates it all with an outstanding budget price and as a result, receives our Editor’s Choice award of Best budget entry-level gaming PC.

Who is it for?

The Dell XPS series has been Dell’s masterpiece both for its laptops and desktops. Dell managed to create a stunningly modest but altogether beautiful machine without compromising on performance and we applaud them for that. Therefore, Dell XPS 8930 is no exception in terms of aesthetics and performance. It was created both for the entry-level gaming PC audience as well as a simple home workstation.

Dell’s XPS 8930 design is unlike other gaming computers we’ve seen. It doesn’t brag of perfect contours, polished edges or flashing LED lights in its aesthetics like gamer brands do. No, it is a sleeper thanks to its matte and glossy finish. While it might not be what every hardcore gamer wants, it easily meets the standards of the modest user.

To say the least, you won’t be ashamed to want to hide at the back of the desk away from onlookers. It suffices to say that its subdued design fits perfectly well among other home and office desktops.

Admittedly, it’s not all bad news with the Dell XPS 8930. Its case is metallic shrouded in finely finished plastic that’s glossy black with chrome accents. The plus side is that it’s compact and offers little to no flex or give. Also, the case measures 14.02 x 7.09 x 15.22 inches and weighs 22 pounds which is a tad lighter than the Dell Inspiron 5675 (26.43 pounds).

The Lenovo Ideacentre Y900 also loses the belt test by weighing in at 33 pounds against Dell’s 22 pounds. That has its advantages as figuring a place to fit the PC won’t present a problem. Its compact size allows it to fit on small desk spaces unlike its gaming sister Alienware and Acer’s Predator G series.

Dell featured a decent selection of ports on both the front and rear exterior of this PC. The front has a handful of ports including some futuristic ports like 2 USB Type-C ports. Also included are three font facing USB-A ports meaning total there are 11 USB ports, HDMI, Display Port, Gigabit Ethernet, Mic-in, and an SD card reader.

The USB-C is a nice future-proof add on to this PC considering many devices and accessories are now using this port. The front ports should also come in handy when plugging in your flash drive, smartphone

Dell has a configuration of desktop towers in the Dell XPS 8930-740BLK. Our reviewed unit came with the latest 8th Gen Intel Core i7 6-core processor and high-performance graphics card (Nvidia GTX 1050Ti). The processor is Coffee lake architecture product capable of running at 3.2GHz to 4.6 GHz and hitting highs of 5.0+GHz (with the overclockable i7-8700K)) which is great for performance enthusiasts.

That said, the processor has 6 hyperthreaded cores for high performance but the bundled stock fans can get overwhelmed during heavy hyperthreaded workloads. That means you should be ready to upgrade the fans if you’re planning to task it with intensive workloads. Users looking for peak performance can opt for the overclockable Intel i7-8700K processor. Otherwise, the processor works perfectly for day-to-day home/office tasks entry-level gaming.

To better understand how the i7-8700 performs against other rivals of its time, listen to this comparison of i7-8700 to Ryzen 7 by PC Centric.

Some of the other components our reviewed unit came with is 16GB DDR4 (2666MHz) memory, 2TB Hard drive storage and NVIDIA GeForce GTX 1050Ti graphics card. Even though there is no one-size-fits-them-all answer for how much RAM one needs, by many standards 16GB is plenty of memory for multitasking workload.

How much RAM one needs is an age-old question with different stock answers. But if you’re not planning to run a dozen open tabs, applications in the background while playing memory-hogging games, even the 8GB should do well. Nowadays, 8GB is the sweet spot for memory, but if you are planning on running demanding software, virtual machines or video editing, then you’re lucky to have 16GB.

As far as storage goes, 2TB hard drive storage is plenty to go around. And it should be enough for data enthusiasts and users looking to save some multimedia, programs, and games. Still, we would have loved to see some solid-state storage on this Dell XPS 8930 desktop. SSD would have gone a long way in improving boot times and software loading times. While our review unit lacked SSD, there are other configurations with SSD included. Unfortunately, those are slightly higher-end configurations, bummer!

One of the biggest questions that arise with this desktop is whether it can game or not. The answer is yes, it can, pretty well especially on 1080p and a bit on 1440p resolution. As far as 4K gameplay goes, considering the GPU is a budget-entry card, it does not perform anywhere close to premium high-end cards. So don’t expect much in that resolution.

On gaming runs, GTX 1050Ti achieved 60fps at high settings or higher quality on almost all triple-A games available. Of course, the slightly higher-end Nvidia GTX 1060 offers smoother gameplay with almost no stutter, but the 1050Ti is also commendable. Also, because the card is overclockable, it offers about 150MHz more power which translates to better performance.

So is the Dell XPS 8930 truly worth its supposed value or is it a snag to trap unsuspecting buyers? Well, first of all, being that is built for entry-level gaming PC users and as a simple home workstation, it doesn’t need to have over the edge aesthetics. Not every gamer wants a PC with sci-fi movie themed contours and aesthetics, it is even off-putting to others. The Dell XPS 8930’s is grounded in value and its simple design is a testament that it might just be enough for the modest at heart.

On functionality, it combines an impressive lineup of arsenal capable of handling 3D titles. Its system doesn’t miss the performance mark owing to the 8th gen Intel Core i7-8700 processor combined with Nvidia GTX 1050Ti GPU. It sports plenty of hard drive storage (2TB HDD) for the data hogs and memory for multitasking (16GB). Our one gripe with it is the lack of a solid-state drive but that can be solved by upgrading to one.

All in all, the Dell XPS 8930-740BLK Tower Desktop is a great system. Hardcore gamers won’t be pleased with it but it does make remarkable strides to impress the entry-level gamer. It’s small, compact and best of all affordable. For that reason, we easily recommend it as our Editor’s Choice for entry-level gaming PCs.