The SkyTech Legacy Mini is a well-rounded desktop that posts excellent all-around performance. It brags of high-performance components such as AMD Ryzen 3 processor and state of the art GeForce RTX 2060 graphics card. As a result, the SkyTech Legacy Mini is a good performer at 2560 x 1440 resolution and can hold its own at 1920 x 1080 with real-time ray tracing enabled in games like Battlefield V.

We recommend it for users looking for a budget entry-level gaming desktop. 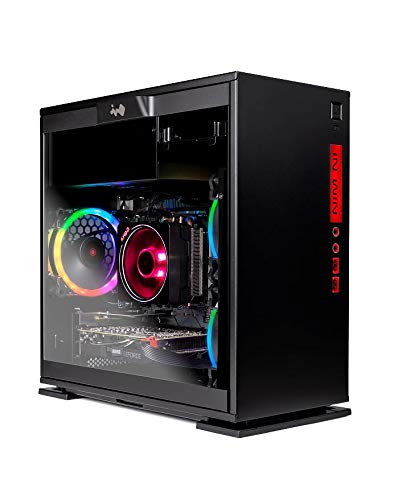 The SkyTech Legacy Mini case is nothing different from the SkyTech [RX580] Blaze desktop we reviewed recently. It comes in a pretty low toned black AMD Wraith Spire LED Spire Cooler case with no-frills except for colored ports at the front dash and a gorgeous glass side panel. You’ll fall in love with this PC for its large spacious interior that has enough room for expansion.

The case is made of aluminum for sturdiness. Unlike most pre-built gaming PCs like Cyberpower, the SkyTech Legacy Mini has a straight-edged design that gives it a proper, somewhat conservative look.

With a dimension of 15.4 x 8.1 x 15 inches, it fits the bill as a normal mid-tower. The main design difference between this unit and the SkyTech [RTX 580] Blaze is a front face, where the latter has a meshed front dash. The Legacy Mini’s front is smooth except for its bright red logo. Compared to CyberPowerPC’s Gamer Xtreme VR GXiVR8500A Gaming desktop (18.5 x 7.9 x 17.9 inches), our unit is of a smaller footprint.

Moving left, the tempered glass-panel does a splendid job showing off the interior hard at work and the RGB-lit internals. Watching from outside, it’s easy to spot the 3 x 120mm RGB Ring fans and A320M Motherboard. The panel allows tool-less access to the hood, but you have to go through a couple of thumbscrews at the rear of the desktop. 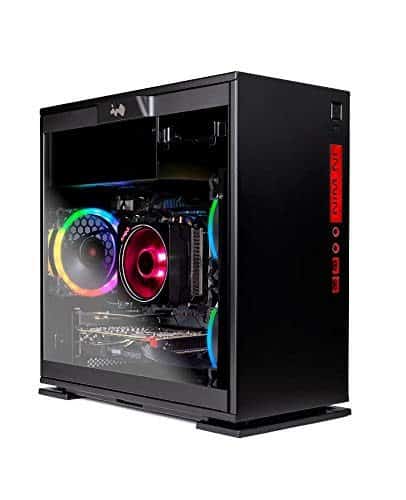 Once inside, you’ll notice the neatly arranged cable management; tied and Velcro-secured. Circulation and cooling is handled by two front-mounted 120mm fans, while the exhaust workload is handled by a single 120mm rear fan. The system also comes packed with an 80 Plus Certified 600 watt Power supply.

The port system is actually decent, with more than enough ports to connect to your favorite devices. However, we would have loved it if SkyTech had included a USB Type-C port to make it future proof. That said, you will find a few front-accessible ports including two USB 3.0 ports, an audio jack, and a microphone jack. The two USB 3.0s are great for when you want to connect your smartphone and transfer data, or multimedia. The audio jack is best-used for video conferencing because of its proximity.

Meanwhile, the rear houses a bit more ports, such as a single HDMI port, 3 DisplayPorts (1.4 Version), 4 USB 3.1 ports, 2 USB 2.0 ports, HD Audio, and MIC jack. The DisplayPort and HDMI port come in handy when connecting your external monitors. Both of them combined, you should be able to hook up a triple monitor setup. The SkyTech is missing a flash-card reader which might not sit well with some users, but it’s not that bad a tradeoff.

The unit also includes a small 802.11 ac wireless adapter and you get a complimentary keyboard and mouse packaged with the desktop computer. Just in case you need to upgrade to a wireless mouse, check out our best mouse under 20 dollars guide for some budget options.

SkyTech lets you customize your own PC on their website so you can choose whichever hardware you want to have. Be it vibrant RGB lighting, consistent color schemes, high build quality, and/or professional cabling. That said, our unit is a prebuilt option listed on Amazon so we didn’t customize it. SkyTech equipped the Legacy Mini gaming desktop with the AMD Ryzen 3 1200 processor, a late June 2017 AMD processor made for entry-level gaming desktops.

So, the AMD Ryzen 3 1200 processor is the low end of the spectrum (AMD Ryzen SKUs) but thankfully, it can push enough grunt to give the very best performance. While it is the lowest in the stack, it comes with a 3.1 GHz base clock speed and capacity of hitting highs of 3.4GHz on turbo. Ryzen 3 1200 has 4 cores and 4 threads with no hyperthreading (SMT). Regardless, it is a powerful CPU that is unlocked and can be overclocked on a B350 and X370 motherboard.

In real life performance, this entry-level processor has more than enough juice to power everyday use. Potential users will enjoy hours of butter-smooth web browsing, shopping, watching the latest releases on Netflix and anything in between. That is after finishing their productivity tasks for work. On the flip side, it isn’t a good candidate for high-demanding workloads such as CAD rendering. But, even so, combined with a powerful graphics card like the RTX 2060 it makes a suitable platform for gaming.

For this PC, SkyTech added a 16GB DDR4 memory and 500GB Solid-state drive. The 16GB is not too shabby as it is capable of handling daily productivity such as word processing and web browsing with aplomb. 16GB is also a sufficient amount to muscle through intensive workloads for video editors, creative professionals, and gamers. It should offer a smooth experience even with more than a dozen Chrome tabs open while running AAA games on the side.

For storage, the Legacy Mini uses the 500GB Solid-state drive. A squeaky-clean, bloatware-free copy of Windows 10 Home is installed on the SSD. That translates to fast boot times, fast loading of software /applications and games for this PC. With this amount of space, you will have to be careful only storing your most recent or important games and files. Since other files and multimedia might fill the SSD pretty quickly, it would be advisable to get a hard drive (at least 1TB HDD) to help.

The SkyTech Legacy Mini desktop has an edge over desktops for having the GeForce GTX 2060 graphics card. That makes it only comparable to the likes of HP Omen Obelisk and Origin PC which both have RTX 2000 series graphics cards. Like all other Nvidia Turing lineup cards, the RTX 2060 is also built on Turing architecture (TU116 chip). The card packs 1920 CUDA Cores, 240 Tensor Cores and 30 RT Cores. And as such, it harnesses enough power to be a good performer at 2560 x 1440 and 1920 x 1080 resolution in games.

There’s a lot of aspects to love about the SkyTech Legacy Mini desktop. It flaunts a no-frills design with spacious room for upgrading and high-end features. The combination gives it the knack for juggling processor-hungry workloads simultaneously with aplomb. Other features you’ll have in your corner include plenty of ports, plenty of power and an affordable price tag.

With this assembly of features, the Legacy mini offers a smooth experience in day-to-day tasks, multitasking, and gaming. If you prefer a bit of a gamer theme on the design, then the Legacy is a miss. But if you’re more interested in performance and gaming muscle, the AMD CPU and RTX 2060 won’t let you down.

We recommend the SkyTech Legacy Mini as a mid-range gaming desktop for the budget-conscious user.

link to How to Clean Thermal Paste Off CPU

Thermal paste is an essential but often overlooked component that keeps your computer cool and functioning. Old thermal paste can reduce heatsink cooling performance, so if you notice your...

If you purchased an SSD to replace your HDD, it could be frustrating if your new drive refuses to show up on your computer. Luckily, you can fix this issue quickly in most cases, and you do not have...