The HP Omen 880-010 Desktop makes a bold statement for gamers looking for a smart case to go with their gaming rig. The case is nowhere close to subtle with its black etched plastic chassis and see-through glass panels. Inside it stuffs a 3.2 GHz Ryzen 5 1400 processor, Nvidia GeForce GTX 1060 graphics card, 8GB of memory and 1TB HDD storage.

All of these onboard features make it both a great mainstream desktop for casual tasks and gaming runs. However, we noted that its price tag is a bit more than the competition (they offer sub $700 PCs). If you don’t mind paying over what the competition is offering, that is if you appreciate the aesthetics, the HP Omen 880-010 Desktop is a great midrange gaming desktop to own. 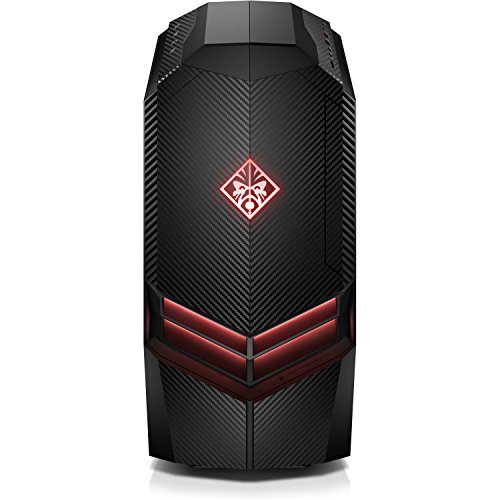 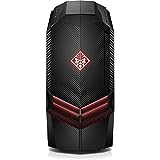 Under the hood, the HP Omen 880-010 Desktop is powered by a 3.2 GHz Ryzen 5 1400 processor, 8GB of DDR4 memory, 1 TB of mechanical hard drive and an Nvidia GeForce GTX 1060 graphics card. But we’ll deal with the processor first. Launched during the summer of 2017, the Ryzen 5 series processor was made to compete with the entire spectrum of Intel’s Core i5 quad-core “Kaby-Lake” series.

AMD improved on per-core performance on this CPU giving it a clock speed of 3.2 GHz (base clock) and 3.4 GHz (max turbo, without overclocking). While the Ryzen 5 1400 is AMD’s lowest-end Ryzen 5 chip, it still has the muscle for gaming at 1080p and producing high frame rates.

The CPU is capable of handling casual tasks smoothly and gaming without many hiccups. But if you want to really hit higher frame rates, a desktop with Ryzen 5 1600x should serve you better. Alternatively, if you don’t have any more cash to spend on other higher-end Ryzen 5 chips, a large air cooler or liquid cooler may help to push the chip to near stable 4.0 GHz.

Processor aside, the HP Omen 880-010 also sports an 8GB DDR4 memory and 1TB HDD storage. Because this is a mainstream gaming PC, 8GB memory is enough for handling most everyday productivity tasks. That said, if you want to improve performance especially multitasking duties, consider upgrading the RAM to at least 16GB. 16GB should allow you to muscle through memory professional work, demanding software and games.

Usually, professional programs such as engineering software and AAA gaming titles tend to use more RAM as they increase in complexity. But if your use is casual like working on Excel spreadsheet, Photoshop projects, and light gaming, then you shouldn’t worry about the 8GB. Ideally, it has overall system performance for office-centric tasks such as word processing, spreadsheeting, Web browsing, and video conferencing.

As far as storage goes, the 1 TB mechanical drive is ample for most storage needs. The HDD comes with 7200 RPM spindle speed which is the highest speed for data transfer on most hard drives in mainstream desktops. To boost your operating system performance, load times and running software, consider installing a solid-state drive.

On a performance and pricing front, the Radeon RX 480 is the GPU that our unit compares most closely to. There is a 3GB memory on the graphics card (GTX 1060) that enables it to handle AAA games at high resolutions.

A perfect comparison to our unit is the HP Omen Obelisk (875-010) configured with an AMD Ryzen 5 2600 processor, Nvidia GeForce GTX 1060 6GB car, HyperX 8GB RAM and 256GB SSD. The Omen Obelisk is more or less equipped like ours but improves on the processor (is a six-core processor) and quality of memory.

Another advantage the GTX 1060 brings to the table is a myriad of video ports including 3 DisplayPorts (1.4a) connectors, a single HDMI (2.0b)ports, and a DVI port.

Here are a few examples:

Of course, there are other desktops at this price point. Depending on what your preference is, it can be a good or bad option for you. While most desktops share almost similar specs and configurations, some have better designs while others better storage options or cooling systems.

So, while our unit is great, it suffers from a slightly higher price tag than the rest of its competitors. There are other options like the HP Pavilion 790-0020 Desktop that offer almost similar specs but with a better low price tag. The Dell Inspiron i5680-5842BLU-PUS Desktop and the CYBERPOWERPC Gamer Xtreme VR GXiVR8060A5 Desktop remain the best choice for mainstream PC with gaming capacity.

The stride ahead for having modern i5-8400 processors, both HDD and SSD storage options and an Nvidia GeForce GTX 1060 GPU.

Check out the impressive HP Omen 880-020 Desktop, a configuration of our unit that we reviewed earlier on.

On the Whole, One Powerful Desktop

One view of the HP Omen 880-010 Desktop and you’ll be hooked for life. That’s what I thought when I first saw the Omen 880 because it certainly has a radical look. And I think most prospective buyers will love the design and features it brings. While we frown on the price tag it comes with, many might defend it as the price for having a gaming-themed case and lighting for great gaming ambiance.

Price notwithstanding, we loved the components, easily expandable and spacious case and performance it brings. The system doesn’t miss the performance mark owing to the AMD 5 1400 processor combined with Nvidia GTX 1060 GPU.

It sports plenty of hard drive storage (1TB HDD) for the data hogs and memory for multitasking (8GB). One of our biggest gripe with the system was the pricing which makes competition offer better options.

As it stands, the Dell Inspiron i5680-5842BLU-PUS Desktop and the CYBERPOWERPC Gamer Xtreme VR GXiVR8060A5 Desktop remain the best choice and value for mainstream PC gaming. But if the price difference isn’t a problem, you can still go for the HP Omen 880-010 desktop. Also, consider adding a solid-state drive if you consider getting it.