The Dell Chromebook 11 3189 T8TJG 11.6-inch traditional laptop (black) that’s as tough as they come. It is built with the school environment in mind where falls, scratches and less than friendly handling is a norm – especially among young schoolers – yet managing to offer sufficient power to handle all the demands of school life.

Best of all, it can punch through a whole day without the need to have it plugged into power. 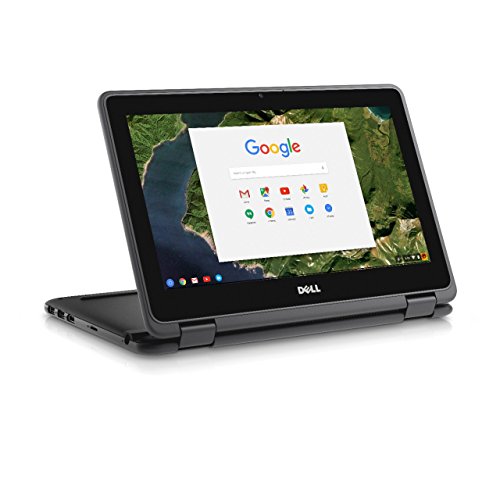 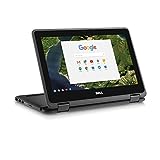 The Dell Chromebook 11 3189 T8TJG 11.6-inch traditional laptop is a tough machine that is well capable of handling the hustle and bustles of school. It makes an excellent choice for any college student.

The Dell Chromebook 11 3189 T8TJG is a simple and beautiful machine. Well, of course, the beautiful part doesn’t go so far considering its build to last and outlast rather than to shine. Its black polycarbonate exterior feels strong to the touch and has a rubbery coating to it – which is a safeguard from scratches and falls.

Further, its rounded corners go a long way to minimize the impact of falls. More on that still, the rubbery exterior also prevents scratches when the laptop is fitted in a backpack along with books and stationery on the ride to and from school.

An aerial view of the Dell Chromebook 11 3189 T8TJG reveals the Chrome logo on the top left corner and a three-color LED light on the top right end. This is a feature that we have seen in other Dell laptops, which serves as a signal light between the tutor and student. Say the student is not ready to join in a demonstration or exam in class, s/he can easily signal the tutor by flashing one of the three colors to get the attention of the tutor. 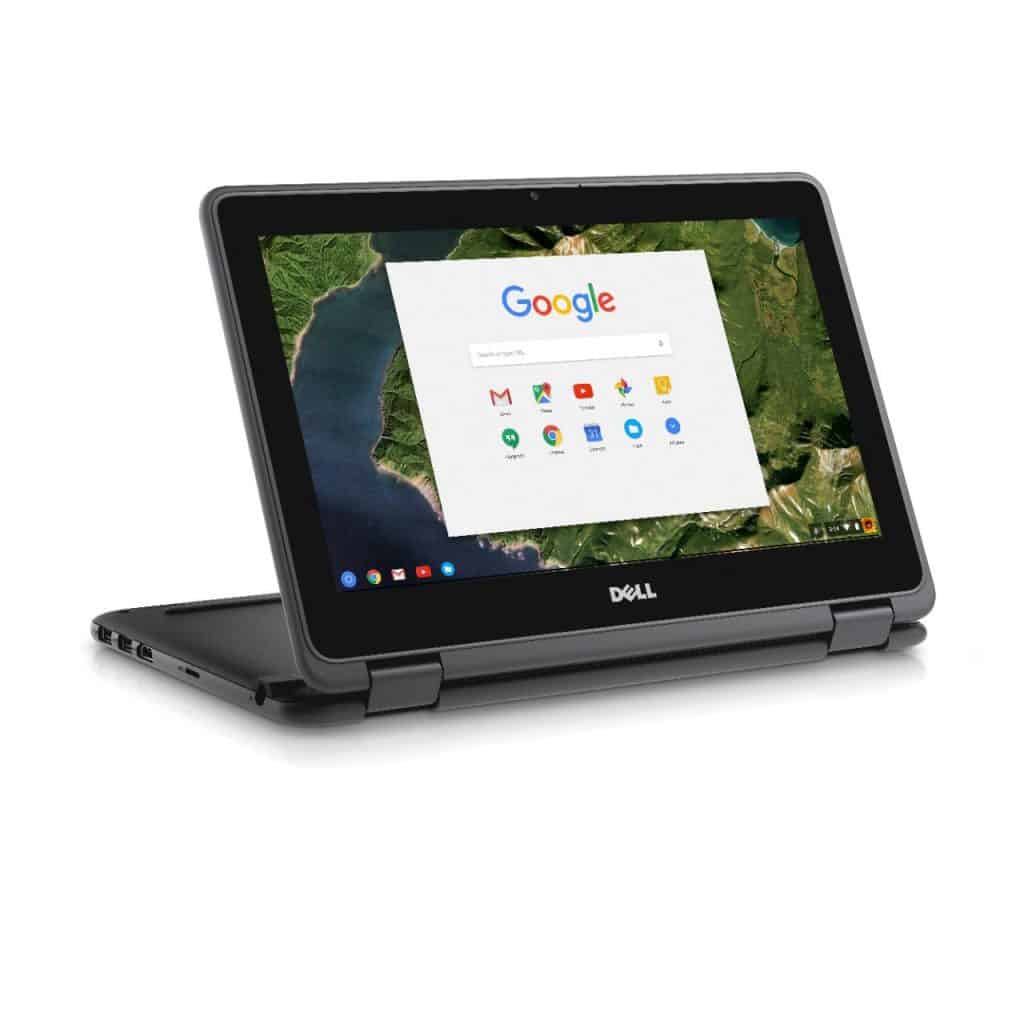 However, one has to download its Chrome extensions free of charge on the Chrome website for that. The Dell logo is placed at the center of the lid as is common with Dell laptops.

The Dell Chromebook 11 3189 T8TJG’s bottom features two rubber strips running horizontally from the right to left side, whose traction makes it harder for the machine to slip off the table. Since Chromebooks are not built to run heavy applications, cooling is passive – so you can expect a perfectly silent machine.

The Dell Chromebook 11 3189 T8TJG comes with a modest touch-sensitive 11.6 Inch HD display (1366 x 768). That makes it slightly a smaller footprint Chromebook compared to the 12.3-inch (2400 x 1600) Samsung Chromebook. Nonetheless, viewing angles are great thanks to the IPS panel it comes in, in addition to the Corning Gorilla glass that makes it more resistant to scratches and falls. Back to the HD display, we did not consider it a let down to have a lower resolution HD display as opposed to an FHD display.

For an 11.6 Inch display, HD is quite satisfactory considering the small screen size which means high pixel density thus good image sharpness and color presentation. The lower resolution also means that the Dell Chromebook 11 3189 T8TJG consumes less power which makes a stronger case when it comes to battery life. And of course not forgetting that the less pixel the processor has to handle, the less strain it will suffer. That means that more processing power will be available to handle other tasks.

The Chromebook 11 3189 also comes with a 360 degree hinge – along with the touchscreen display – which means you can use it in either of the four modes: laptop mode, tablet mode, tent mode (with the hinges facing upward and the keyboard facing away from you) and stand mode (with the keyboard facing downward and the display facing you). That makes the Dell Chromebook 11 quite flexible to use, and more friendly to the classroom setting.

Running on the Chrome Operating System, the Dell Chromebook 11 3189 T8TJG is mainly web-based and relies heavily on Internet connectivity. But unlike Windows-based machines, Chromebooks do not require much space to store programs but rather runs on online apps. That’s why we can confidently say that 64 GB is more than enough for a basic user.

If you haven’t used Chromebooks in the recent past, you will be impressed with the improvement they’ve seen, whereby you can get almost anything done online these days.  As of very recently, Chromebooks could not run Android apps, something that we are glad to note is on the way out.

While we did not test to see whether this was true, the Dell Chromebook 11 3189 T8TJG can handle android apps according to Android Central. As of writing this review, not all Chromebooks will be able to handle Android, but a few specific models will – including this model.

Spills may be rare among older users, but they are far from rare with schoolers. That is exactly why we think the spill-resistant keyboard was an idea born in heaven. And to add to that, the keyboard is pretty sturdy to withstand poor handling among kids.

The key layout is pretty much the same as in other 11-inch Chromebooks, with the top Function keys being replaced with forward, back, reload, full-screen, toggling overview mode, screen brightness, and volume controls. In place of the Caps Lock is a search key. The keys are well spaced and comfortable to type on with decent travel. They are however not backlit, which is quite expected at this price point.

Port selection is the Dell Chromebook 11 3189 T8TJG is quite decent. The right side hosts a lock slot and a headphone/ microphone combo while the left a full-size HDMI port, two USB 3.1 ports, and a microSD card reader. The card reader can handle several card formats with a maximum of 256 GB cards. Wireless connectivity is via 802.11 b,g,n WiFi and  Bluetooth 4.2.

The 64 GB flash solid-state drive storage makes the Dell Chromebook 11 3189 quite snappy. It takes less than 5 seconds for it to boot from sleep, and is generally quick to get apps running. 64 GB is quite sufficient to cater to most of the needs of a student considering that Google offers free storage space on Google Drive with each Google for Education Account.

Further still, Google offers every Chromebook user 100GB of storage for 2 years free of charge. Moreover, with the presence of USB sticks and the microSD card reader, one can easily find secondary storage options.

On matters battery, the Dell Chromebook 11 3189 T8TJG lasts a cool 11 hours 30 minutes from a full charge. This is more than enough for a full day of use in class, with a little more leftover.

The Dell Chromebook 11 3189 T8TJG makes an excellent machine for any user who cares for battery life, durability and reliability. And best of all, it comes at an affordable price that’s hard to beat with any Windows laptop.