The Lenovo ThinkCentre M720s W10P is a straightforward, cleanly assembled small-form-factor desktop for users looking for a compact, lightweight, portable and space-saving system for daily productivity. It’s a great fit for office settings and for businesses that prioritize trim dimensions and office acoustics over upgradability. 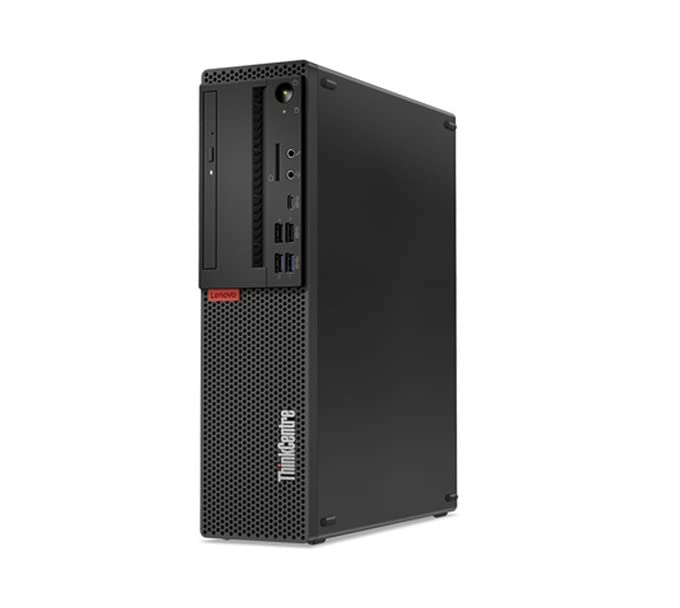 The Lenovo ThinkCentre M720s W10P is a good solution for users looking for an excellent desktop experience, but don’t have a lot of desk space. This small PC packs a mean 8th Generation i7=8700 processor, 16GB of memory, 500GB Solid State Drive inside a compact chassis for space-constrained offices and cubicles. The Lenovo is designed to sit horizontally but it comes with a small stand that allows it to stand vertically if you ever need to.

Once plugged in and set up, you’ll hardly know it’s there; the M720s operates very quietly. Lenovo added in support for multiple monitors and a bunch of security features making it fit for the professional setting. Its no-fuss case design, clean installation, and cable management is also a statement pointing to its business nature.

The Lenovo ThinkCentre M720s W10P borrows its no-frills design from professionally-minded desktops. It won’t wow you with its staid corporate look but its simple metal chassis and honeycomb-patterned grill is a good splash of flair for a business computer. Most of the compact case is black except the little splash of red accents on the ThinkCentre “I” and the Lenovo logo.

Like I mentioned earlier, the desktop is designed to either lie horizontally or stand vertically. Lenovo included a small stand with the tiny PC to erect the PC vertically. The stand is really more of a foot, a small plastic bracket that slips onto the side of the chassis to provide more stability when setting up the desktop on an edge. 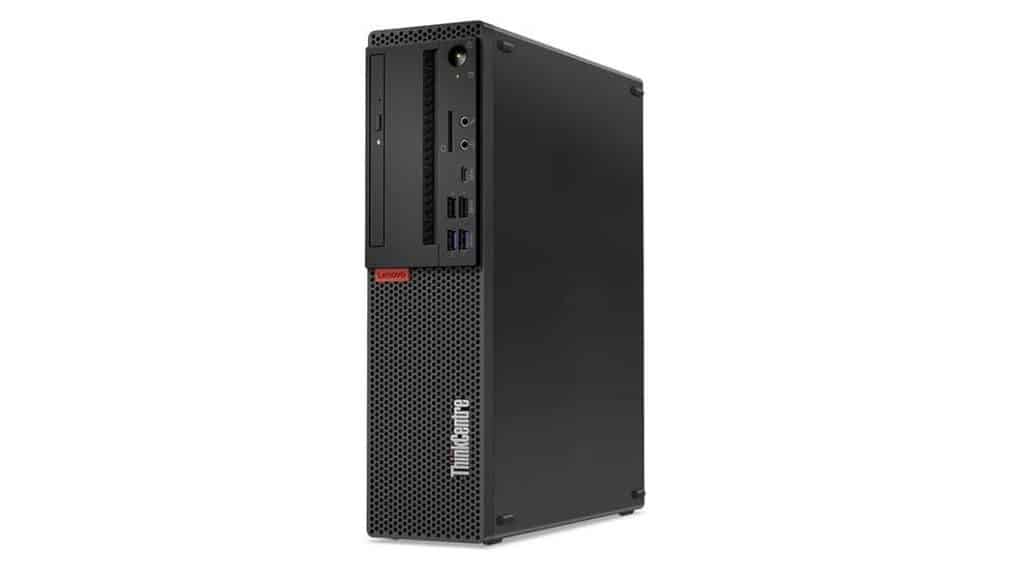 Sitting at 3.64 x 11.44 x 13.52 inches, the compact Lenovo ThinkCentre M720s looks and feels like a console. It isn’t bigger than a paperback book. Nonetheless, it is slightly larger than Intel NUC desktops such as the Intel NUC NUC8i7BEH Mini PC (6.1 x 5.3 x 4.6 inches, 2.9 pounds). Other than its size, the ThinkCentre is different from other mainstream desktops in components.

The ThinkCentre M720s lacks the potent discrete graphics card and easily accessible internal design. Also, it’s obviously not as upgradeable as other desktops towers. But don’t get me wrong, that is not a bad thing. In the broad view of things, the compact design is its coolest aspect.

The USB Type-C port is a nice touch of modernity placed into this PC. It allows the PC to remain relevant for a couple of years which is great if you’re going to be using this desktop for a few years to come.

The rear section holds a few more ports such as four USB 2.0 ports, a single serial (9-pin) connector, an Ethernet (RJ-45) port, VGA port, a pair of DisplayPort ports, and a single line-out (3.5mm) port. Thanks to the ample number of video ports, you can connect up to three external monitors with this PC which again is great for productivity. Finally, a screw-on antenna is included for the 802.11ac Wi-Fi adapter, as well as a LAN port for wired networking.

The component selection for the Lenovo ThinkCentre M720s is a huge buffet, extending to the CPU, memory and storage choices. Lenovo offers a Core i7-7700, i7-8700 processors, 8GB, 16GB,32 GB memory 250GB SSD or 1TB HDD. The CPUs are from Intel’s eighth-generation of Core processors. Our test system features the Intel Core i7-8700, a six-core chip with a base frequency of 3.2GHz and a turbo frequency of 4.6GHz.

Although the Intel i7-8700 is not the latest or fastest processor, it is powerful enough for photo-and-video editing or other computationally intense tasks.

In real-world scenarios, the system thrives in office-centric tasks such as word processing, spreadsheeting, Web browsing, and videoconferencing. Even with 10 tabs open and streaming both video and music, the system doesn’t show any signs of lag while browsing online.

The processor has an integrated Intel UHD 630 graphics card and no graphics card. That means this PC is no gaming rig or PC for rendering complex 3D models. Nonetheless, with this graphics card, the M720s has all the graphics chops for all your day-to-day needs and is in the same category as most standard office desktops.

Our configuration unit also packs a 16GB DDR4 memory that works hand in hand with the processor. The large memory is great as it comes in handy in multitasking intensive workloads or when you’ve open more than a couple of tabs/screens on your display.

Getting a quick Solid-state drive (SSD) over the creaky mechanical hard drive is what most experienced PC users prefer to do. But while SSDs are fast, their costs can overbearing and at the end of the day might not provide enough space for storage. Fortunately, for this unit, CyberPowerPC did us a solid by including a massive amount of SSD storage. You get 500GB NVMe solid-state drive, but you can always opt for the 1TB of mechanical hard drive configuration for your larger files and games.

The ThinkCentre M720s comes with a pre-installed Microsoft Windows 10 pro 64 Bit operating system. Alongside this operating system is a number of Microsoft apps like Skype, 3D Paint, Cortana and a sample of the Microsoft Office Suite. Lenovo also threw in a bunch of its own software. For instance, you get software like Lenovo Account Portal (sign-in offering support and assistance services) and Lenovo Vantage (a dashboard for updating drivers, running diagnostics and getting app recommendations).

Overall, there thankfully isn’t any unnecessary software to call bloatware in the M720s, which shows a lot of restraint on Lenovo’s part.

The Lenovo ThinkCentre M720s is a great choice for any office short on space. It doesn’t win any awards for its no-frills design but thanks to its features it packs serious power under its belt. As a result, it smashes through productivity like a champ making it the sort of mini desktop you want for your office; small, capable and packed with all the ports you might need for day to day computing.

Other than good performance, Lenovo also offers a few clever accessories. If physical access to your system is a concern you need to be addressed, the system supplies useful security features to protect your data, and the system itself.