The HP Pavilion Gaming Desktop Core i5-9400F Desktop represents HP’s latest range of home office desktops with the capacity to game. Its price tag, components, and performance are all aimed at prospective buyers without the knowledge or who aren’t prepared to build their own rigs.

PC enthusiasts might extol just how cheap it is to build your own computer, but at the price the HP Pavilion Gaming Desktop Core i5-9400F comes with, it might be hard to pull that one-off. That is good news if you don’t want to get your hands dirty and just want a powerful budget gaming PC. We easily recommend it to users in the market for an affordable mainstream PC with gaming potential.

The HP Pavilion Gaming Desktop Core i5-9400F Desktop tells a compelling story of victory and performance. With an option for Intel Core i5-9400F, 16GB of RAM and NVIDIA GeForce GTX 1660 Ti graphics card, it brings to the table nothing but the best-in-class day-to-day performance.

Mainstream PCs are more often than not made to be affordable, meaning more than a couple of trade-offs are made to achieve the affordable price tag. While we’ve seen some companies manage to build attractive desktops with a small budget, most of them are low toned and won’t cause you to turn for a second look.

The HP Pavilion Gaming Desktop Core i5-9400F desktop stands no chance against premium designs we’ve seen in the industry. But its low toned design comes with a bit of eccentric elegance. For the most part, I would say it’s a cool looking pillar made from an all-black metallic case with green accents at its front deck.

Aside from a distinct design, the HP Pavilion Gaming Desktop Core i5-9400F is outstanding for its spacious case. Measuring at 17 x 27.7 x 33.8 cm and 5.15 pounds, this PC will require some room on your home office workspace. That’s reminiscent of its successor and sister, the HP Pavilion 790-0020 desktop, a higher configuration of our unit.

While they look the same, the HP Pavilion 790-0020 improves on performance thanks to a more robust Intel i5-8400 processor and Nvidia GeForce GTX 1050 graphics card. 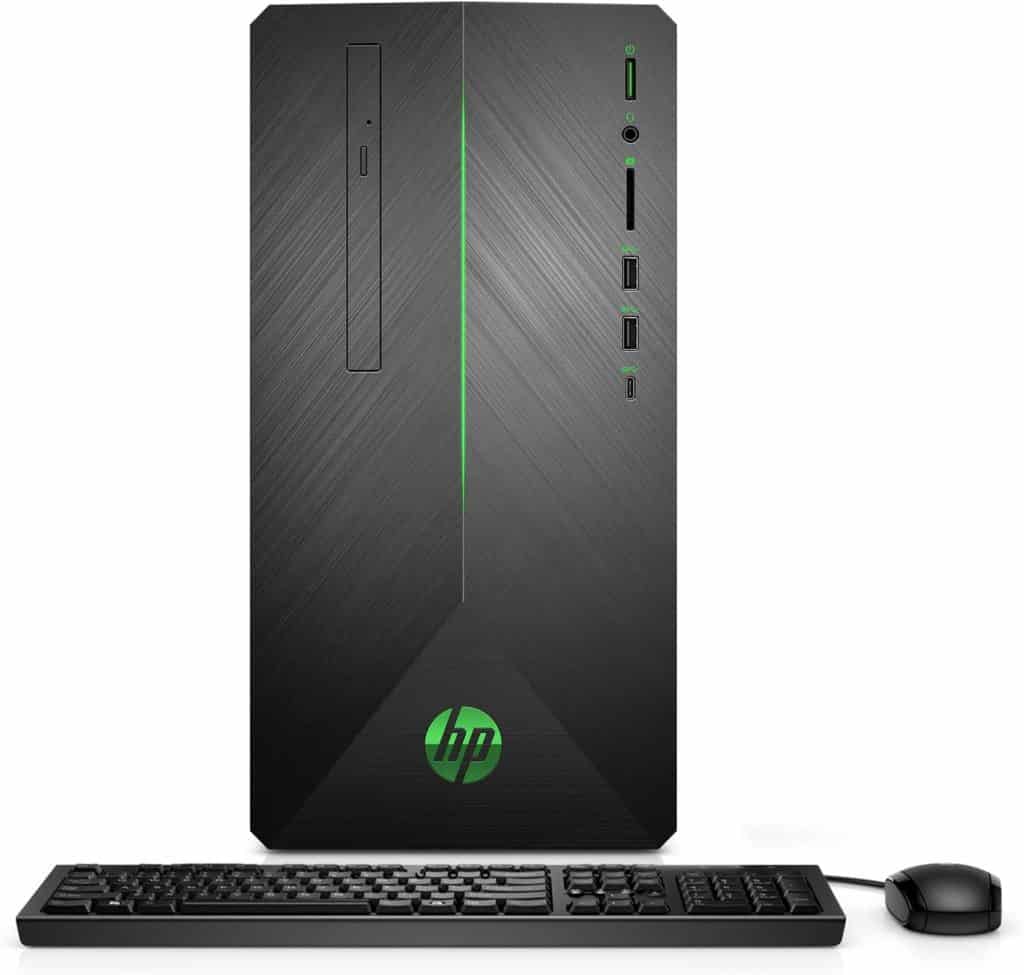 HP included a wide selection of ports both at the front and rear. There are a good number of USB ports, an Ethernet and audio port. Additionally, you get some extra ports thanks to the NVIDIA GeForce GTX 1660 Ti graphics card for all your video needs. That means you have a single HDMI port and 3 DisplayPorts for all your external monitor connections.

You’ll be pleased to know that the front deck has a healthy selection of ports conveniently placed for accessibility.. There is the headphone/microphone combo, 2 USB 3.1 Gen 2 ports, and a single USB 3.1 Gen 1 Type-C port. The Type-C port allows for both charging of devices (phones, tablets) and transfer of data.

Meanwhile, the rear is home to the bulk of the ports including 4 USB 3.1 Gen 1, 2 USB 2.0 ports and a HP 3-in-1 media card reader. The 2 USB 2.0 ports can be used to connect to your complimentary HP keyboard and mouse. And if you perhaps own a printer, you could use the USB 3.1 ports available.

Also, if you’re in the market for a good budget HP printer, the HP Officejet Pro 8710 AIO Printer is a great choice. Anyways, back to ports, thanks to the AMD RX 580 card, there is a single HDMI port and 3 DisplayPort connectors. These ensure you get the very best picture on your PC monitor, while also delivering the best frames per second (at least 60 fps) while gaming.

You can be sure there won’t be any stutters, lags or ghosting.

PC manufacturers might be slowly inching out of DVD drives but HP seems not to be following the trends just yet. At least not with the HP Pavilion 690 series or the HP Pavilion 790 series. The model we review has an optical drive stacked right at the front left side of the deck.

While installing programs or running games from a disc seems to be archaic, it still is great to have the option. That’s most especially if you have no internet access where you live or just plain old still believe in burning DVDs and playing from them.

Getting a system to have a good balance of productivity and gaming while keeping it affordable is not an easy fete. Fortunately, the HP Pavilion Gaming Desktop Core i5-9400F Desktop has a sweet spot for both these themes because of a smartly chosen arsenal of components. It handles productivity and 1080p play with flair because it’s equipped with an Intel Core i5-9400F, 16GB DDR4 memory and an NVIDIA GeForce GTX 1660 Ti graphics card.

The HP Pavilion Gaming Desktop Core i5-9400F flaunts of remarkable system performance for home and office-centric tasks such as word processing, spreadsheeting, Web browsing, and video conferencing. That’s all thanks to the Intel Core i5 Processor, a quad-core processor built-in with Radeon Vega graphics.

If you haven’t heard of Radeon Vega before no one will throw stones at you. It’s AMD’s new (somewhat) revolutionary integrated graphics card that’s capable of high performance and 1080p. It works in hand with the CPU so you get impressive performance without the need for an accompanying dedicated graphics card.

Inside the hood, is an 16GB memory and 1TB mechanical hard drive. For the price the HP Pavilion Gaming Desktop Core i5-9400F sells for, I think they are both enough and reliable. Usually, 16GB is considered the standard amount of memory for most home office kind of tasks. You can handle most run-to-the-mill assignments like web browsing, MS Office, and some lightweight photo editing.

However, if you bought this PC with plans to use it for running professional programs, software or playing hardcore gaming titles, then you might want to consider upgrading. At this point, we recommend at least 16GB. 16GB is enough to give you more space you need to handle video editing projects or audio post-production and gaming.

As far as storage goes, the system runs, boots and loads on its mechanical hard drive storage. The 1TB hard drive storage available is great for storing data, media files and perhaps even some games. While we have no problem with it, it would also be wise having extra solid-state storage working for you behind the scenes.

If you load your Windows Home OS on a 256GB SSD for instance, you can cut down the boot times by more than half. The system will be capable of booting up in less than a minute.

On top of the integrated NVIDIA GeForce GTX 1660 Ti graphics card, our unit can handle graphics-intensive tasks and some gaming. First and foremost, the card introduces new ports into the system for external monitor connections.

I’m talking about a single HDMI port and 3 DisplayPort. Secondly, it has a brilliant Full HD (1080p) performance and decent 1440p performance.

On gaming tests, it managed to get 60 fps and higher on Full HD settings on most games. Here’s how some of the games performed.

So, overall, what you should look forward to in gaming is a higher than 60 frames per second performance on medium settings. As seen above, the bulk of games are playable at these settings (medium 1080) and play at impressive fps. If you need better quality, you can even turn up the settings to “high settings.” It should play without having much frame drops.

The HP Pavilion Gaming Desktop Core i5-9400F Desktop impresses with its competitive pricing, top-notch components, great low-toned design, and blistering best-in-class performance. We also loved the fact that there are plenty of ports including the USB Type-C port and a host of other well-placed ports.

All these make the HP Pavilion Gaming Desktop Core i5-9400F Desktop a great mainstream PC for general-purpose use and some light entry-level gaming. It’s a reliable workhorse for daily run-to-the-mill tasks such as web browsing, photo, and video editing, content creation, and gaming. We recommend it to the budget user with the need for an affordable home/office PC with the need for holistic performance.