The HP Chromebook 14-db00050nr is a no-frills budget laptop for the budget-minded and for all-round basic tasks. It flaunts a simple design, sharp 1080p display, comfortable keyboard, and decent in-class performance. We recommend it for home productivity tasks such as web browsing, reading Google Docs and watching movies.

You need a laptop and don’t want t spend a fortune on one, that’s understandable. If anything, that’s the underlying reason why Chromebooks were built. While there are some Chromebooks that cost a good penny, most Chromebooks maintain a budget price tag and remain true to their niche. They generally cheap are great for most computing tasks. The only catch is that they use a slightly different operating system, one that is not Windows or Mac. Instead, they run on the ChromeOS ecosystem.

The HP Chromebook 14-db00050nr is a true mascot for the Chromebook team. Our test unit packs an AMD Dual-Core A4-9120 Processor, 4 GB SDRAM memory, 32 GB eMMC Storage, and as you guessed it Chrome OS. Some of its stand out features include a full HD touchscreen and 14-inch display and awesome price tag.

In this review, we find out how it stacks up against the competition or should you look elsewhere for an affordable option?

In terms of aesthetic, HP picked up a pleasant design for this HP Chromebook 14-db00050nr. The chassis is textured plastic highlighted by a fresh white color that’s definitely going to stand out among other laptops. The textured surface does a great job to prevent scratches and keep away smudges. But in long over the long haul, the white surface might get dirty if exposed to kids and the K-12 market.

Overall, I think the white surface is a breath of fresh air in a market where silver chassis is typically the norm.

Moving on, there is the HP logo embossed right in the center of the chassis in a subtle way that’s easy to miss. On opening the lid, you’ll notice the bezels around the display have the same texture but the keyboard and deck use a smoother feel and faux aluminum look. Up to this point, you’ll notice there is no metal in this laptop, but that’s expected for a laptop at this price point. The Acer Chromebook 14 is one of the few Chromebooks that defies this with a metallic build though.

At 0.7 inches thick and weighing 3 pounds, the HP Chromebook 14 is lighter than the Acer Chromebook 15 (0.8 inches, 3.7 pounds) and Asus Chromebook C523NA (3.8 pounds). This goes to show that it is a great laptop for commuting to school. The hinge can bend back a full 180 degrees, so you can lay the screen flat on a surface, just in case that sounds appealing to you.

While there is nothing particularly flashy or stand out about the Chromebook 14, HP deserves a pat on the back for fitting a 1920 x 1080 native resolution display on this laptop. Normally, laptops under this price range come with a 1366 x 768 display so this is a breath of fresh air. With 1080p, one should be able to enjoy watching YouTube videos and viewing Google Docs. This 14-inch panel isn’t very bright but you can be sure it offers better visuals than the outdated 1366 x 768 resolution panels. 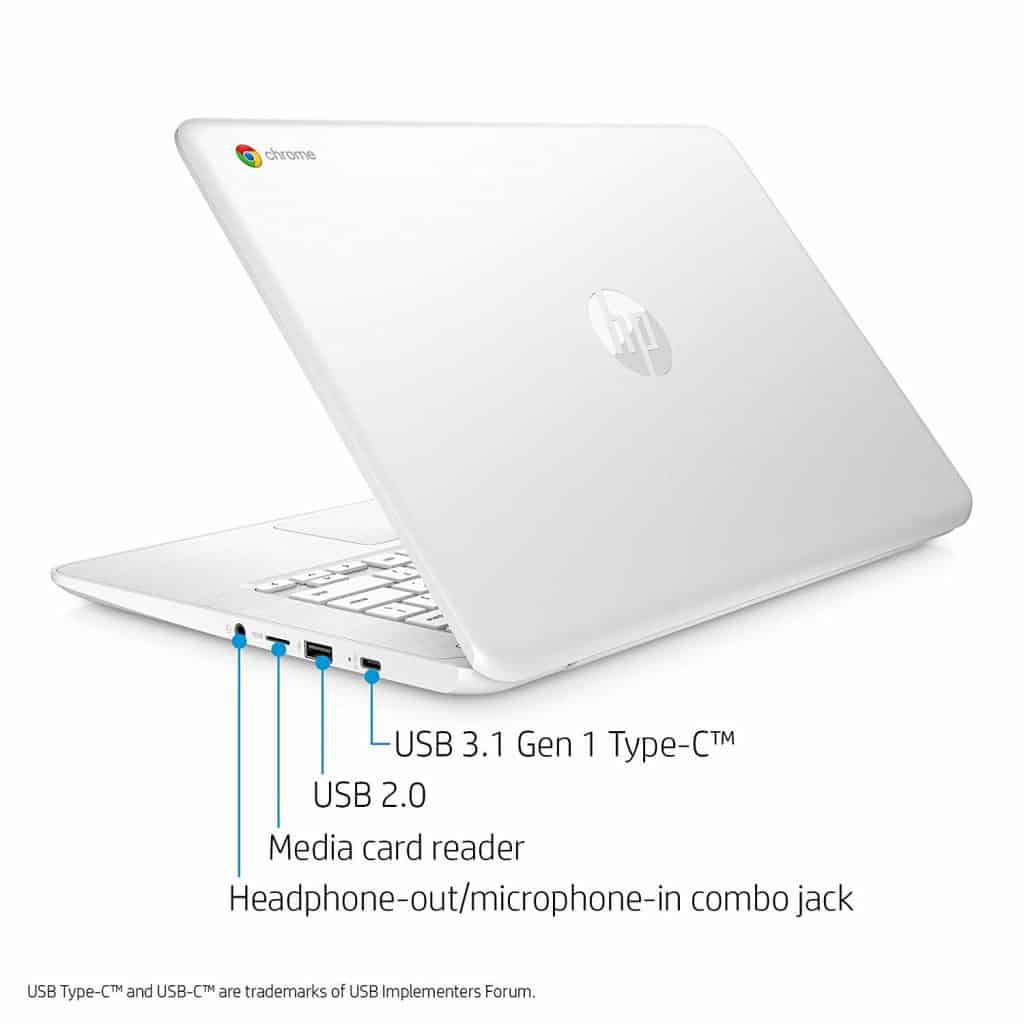 For this Chromebook, the performance depends solely on the processor. HP deserves a round of applause for being among the first manufacturers to fit a Chromebook with an AMD chip. Inside, the HP Chromebook 14-db00050nr packs an AMD Dual-Core A4-9120 processor with a clock speed of 1.6GHz and a turbo boost of 2.4GHz. This is similar to Acer Chromebook’s 14-inch FHD display that runs on an Intel Celeron N3160 processor with 4GB of RAM and 32GB of storage.

Head to head, HP almost always scores slightly lower than the Acer Chromebook. It’s enough of a difference to show up in benchmark scores but not enough to make a huge difference in real-life use.

Because the choice of the processor between AMD and Intel is one that some customers have to consider, let’s dwell on the issue a bit. Let me start by saying, in my experience, the most relevant things in processor technologies is thread performance and overclocking which both mean a lot depending on what you want to use your PC for.

And because of that, it’s more important and is a concern to buyers in the higher-end PC market. What I’m trying to say is that that type of power and the use cases that go along with it are not in the minds of Chromebook customers – certainly not those looking for budget options, and low-power Chromebooks.

So it’s really great that HP went with an AMD chip for this Chromebook. It’s a good step in ingenuity and a remarkable effort to bring variety to the Chromebook space. However, AMD chips don’t appear to be notably better or worse than Intel’s when they are placed on Chromebooks. With that said, the AMD processor should allow you to easily hop between several open Chrome tabs simultaneous.

Don’t get too excited though, because there is a ceiling at which point you’ll start experiencing lag (beyond 12 open tabs). Thankfully, you won’t get any trouble working with documents, browsing the web or checking emails.

The memory on this baby is only 4GB. That means streaming Netflix or Spotify is possible. You only start getting slowdowns if you’re working on more than a couple of tasks at once. AS far as storage goes, there is an eMMC 32GB storage available, which is pretty standard at this price point.

As far as gaming goes, this AMD-powered Chromebook 14 is obviously not cut for gaming. The only exception would be playing some light Android games. If you really have to game, there are some more casual Android games like Alto’s Odyssey and Super Mario Run that run pretty smoothly with frame decent low frame rates.  For these, we advice playing with no other app running in the background. While still at it, try out some other extremely basic games like Sonic the Hedgehog.

According to HP, the new Chromebook 14 can last up to 9 hours in estimated battery life. However, that depends on the variant you opt for (HD, or FHD or non-touch). Our unit, however, managed to achieve almost similar scores with Acer Chromebook 14 at 5 hours. That means you’re going to need to carry your charger for when the battery wears out.

We had no qualms with the Chromebook 14’s keyboard. The keyboard has no backlighting but its white, chiclet-style keys are attractive and well-spaced. The keys have 1.2 millimeter key travel which is slightly short of our 1.5mm key travel preference. The keys are a little bouncy with an above-average 71-gram actuation force making it easy for accurate typing even for extended periods.

Similarly, the 4.5 x 2.3-inch touchpad is decent. It offers a fast response as I swiped through a couple of open Google Chrome tabs. I had no problem pulling off some gestures like switching between tabs with a three-finger swipe.

Ultimately, most customers are bottom line looking for a low-powered Chromebook that can run ChromeOS reliably and not one with an Intel or AMD processor. On a positive note, I’m glad HP Chromebook 14-db00050nr fits that bill and does is well. While similarly priced Chromebooks offer better performance, the HP Chromebook 14 is an all-rounder for basic tasks. Also, a good recommendation along that line is the Acer Chromebook 14 and Lenovo’s Yoga Chromebook C330.

As we mentioned, the Acer Chromebook 14 and Lenovo Yoga Chromebook C330 are good examples of worthwhile alternatives. The Acer Chromebook 14 stands out particularly for its all-metal build and intel processor that is a step ahead of HP’s AMD processor in benchmark scores. Our unit does have a fighting chance against these two because of being the budget choice of Chromebook with a touchscreen and USB-C.

Yes. The HP Chromebook 14-db00050nr makes a good case for itself. If you don’t mind the plastic build, there is a lot to be happy about. Other than a decent feature list, you get USB-C ports, an optional touchscreen (if you choose that configuration), average battery life and full HD display – all at an affordable price.