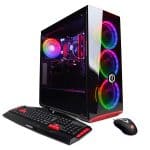 Founded in 1998, CyberpowerPc has since earned its name among gamers as they seek to make it cheaper to purchase a pre-built rig off the shelf than build one yourself. To a great extent, they are living their dream. Enter the CyberpowerPc Gamer Xtreme VR GXiVR8160A gaming PC, one of the most cost-effective mid-tier gaming rigs you will find today. It features a high-end Intel Core i7 processor and a GTX 1070 graphics card that make it a favorite in gaming circles, yet offering all the power needed for video editing, CAD applications, multitasking, and 3D graphics design, among a flurry of other tasks.

The CyberpowerPc Gamer Xtreme VR GXiVR8160A’s comes with an impressive set of specs that guarantee excellent gaming performance at 4K resolution and high graphical settings. In addition to gaming, it offers all the power one may need from a daily driver: be it in Excel work or watching Ultra HD videos on Netflix. Best of all, it is very affordable – far cheaper than it a self-build would cost.

The CyberpowerPc Gamer Xtreme VR GXiVR8160A gaming PC comes in simple yet beautiful black chassis with a removable tempered glass side. It weighs 28.2 pounds (12.8Kgs) and is 18.5 x 7.9 x 17.9 inches in dimension, which is within the range of most desktops. But unlike most desktops PCs, its ports are located at the top of the machine – slightly angled toward the user. This isn’t a bad design and shouldn’t be much of a concern, especially if you position the unit below your work surface. However, if not, you might want to preserve the ports for a wireless mouse and keyboard, or for connecting your USB drive to avoid the clatter from cables running all over the beautiful front face.

The tempered glass on the left side is easily removable by unscrewing two pairs of screws. Its internals is lit by the red LEDs on the fans revealing a well-arranged space with excellent cable management. The four fans provide excellent air circulation, although we feel that a few more vents would have been a good idea.

While the red LEDs are great, they’re not RGB LEDs, which means that you cannot toggle between different colors (unless of course you change the fans or get separate RGB LEDs). There are no fan control options for the four fans – an option we wish we had.

Supplied with the PC is a “free” keyboard and mouse. We like to think of them as bonus items whenever we do reviews. That way, we don’t get disappointed. Fortunately, they’re really nice to work with – more like a standard set than a gaming set. The keyboard offers deep key travel for comfortable typing. The mouse is similarly good – far better than a standard mouse and comes with two programmable side buttons and a double-click trigger next to the left button. Though simple, they are worth having.

One of the must-haves in a desktop computer, more so a gaming desktop is a good port selection. That you get with the CyberpowerPc GXiVR8160A. It comes with a plethora of ports which include two USB 2.0 ports at the front and two others at the back, along with a headphone and microphone jack. At the back are four USB 3.1 (Gen 1) ports, a DVI-D port, DisplayPort and HDMI port, a PS/2 Combo jack and 7.1 audio channel. From the graphics card is a DisplayPort 1.4 port, an HDMI 2.0b ports and another DVI-D port.

Without a doubt, the main attractions of the CyberpowerPc Gamer Xtreme VR GXiVR8160A are its processor and graphics card. It comes with a high-end Intel Core i7-8700K processor (8th Gen. Coffee Lake) and an NVidia GTX 1070 graphics card. Teamed up with these is 16GB of RAM, a 128 GB solid-state drive (SSD) and a 2TB hard disk drive (HDD).

Up from the 7th Generation Core i7-700K(Kaby Lake) processor, the 8th Generation Core i7-8700K (Coffee Lake) has more cores and threads than its predecessor. Going from 4 Cores to 6 Cores, and from 8 threads to 12 threads, the Core i7-8700 offers better multitasking performance and some slight improvement in gaming performance. However, its main strength over the 7th Gen chip is brought to view during overclocking. On that note, the 8th Gen Intel Core i8-8700K comes with an unlocked multiplier, meaning that you can overclock the system using tradition means. However, we do not recommend going this route before upgrading the unit’s cooling system. Check out the CyberpowerPC GXiVR8080A2 which has a water cooling system. All the same, the CyberpowerPc Gamer Xtreme VR GXiVR8160A’s processor offers more than enough power for gaming and all the tasks you intend to use it for.

Similarly, the Nvidia GTX 1070 graphics card is one among the high-end NVidia graphics cards in the market today. Thanks to this card, the CyberpowerPc GXiVR8160A can handle graphical intensive work without much of a struggle. We’ll come to gaming performance in a bit to better emphasize this.

The CyberpowerPc Gamer Xtreme VR GXiVR8160A comes with a high-end Intel Z370-A Pro motherboard with four RAM DIMM slots. Two of the slots have been utilized to host 16GB of DDR5 memory, while the other two are left free just in case you decide to go for a RAM upgrading in the future. Now, 16 GB of RAM is more than you will need in your daily tasks and more than enough to handle most AAA titles. However, that exempts power users such as those in heavy 4K editing who need all the RAM they can get, and who often burn their way through to 64GB of RAM.

With 2TB of HDD storage and 128GB of SSD storage, the CyberpowerPc GXiVR8160A offers more than enough space to store your music, games and work files. And if that is not enough, there’s room for an extra HDD and M.2 SSD on the motherboard. The M.2 slot supports up to PCIe 3.0 x4 and SATA 6Gb/s and can take up SSDs of the following size codes: 2242/ 2260 /2280/ 22110. Unfortunately, it is not possible to have a dual graphics card set-up since there is only one 16 lane PCIe slot (1 x PCIe 3.0 x16 slot) on the motherboard – which is taken up by the GTX 1070 card. But you need not worry about upgrading the graphics card because it will serve you well enough for up to 3 years before starting to fall behind the pack.

The CyberpowerPc Gamer Xtreme VR GXiVR8160A not only has a beautiful build but has lots to offer in terms of performance and upgradability. Best of all, it is offers a better price proposition than main-stream competitors such as the Dell Alienware Aurora R7 and the MSI Infinite X VR8RD-007US. We think it’s worth considering. What do you think?