The Asus ROG Strix II GL704GW-DS76 is a premium built high-end gaming laptop packing some of the components in the industry. It leapfrogs its competition in performance and productivity tasks thanks to the 8th Generation i7-8750H processor and Nvidia GeForce RTX 2070 GPU. Overall, it is a sleek, portable powerhouse with desktop-like performance in a high-quality built chassis.

As for the price, it is slightly higher than the competition. 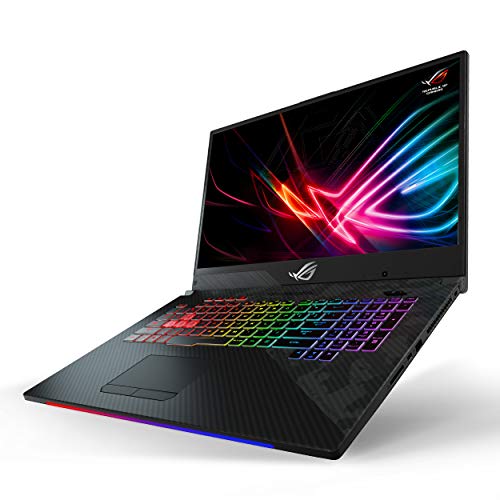 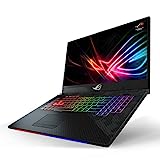 If the Asus ROG Strix II GL704GW-DS76 laptop sounds familiar, it’s because it’s a refresh of the Asus ROG Strix Scar II GL704GM from 2018. Asus was among the first companies to upgrade to the new Nvidia GTX 20 series card. That means this 17-inch now packs the new Nvidia RTX 2070 card for a performance boost. That’s a remarkable move from the Nvidia GeForce GTX 1060 card.

The rest of the features in our test configuration remain unchanged, as does the Intel Core i7-8750H processor, 16GB DDR4 memory, 512GB SSD and 1TB mechanical hard drive. Together these offer best in class performance giving the ROG Strix a good rap. We also loved that this new model is still sleek measuring 1.7 inches at its thickest point in closed clamshell.

For a performance-focused beast, that’s not too shabby. It should demolish every task you throw at it with graceful aplomb but will leave a big dent to your wallet as well.

The overall design of the Asus ROG Strix II GL704GW-DS76 isn’t any different from the past Zephyrus GL703 design. It draws inspiration from the Zephyrus series. Edges and corners are flatter and sleeker, the bezels are narrow while the palm rest carry a light checkerboard texture and light camouflage that gives it its visual flare. The majority of the chassis is made from brushed aluminum with two contrasting brushed finishes that meet to create a dynamic diagonal slash across the lid.

According to Asus, the Gray finish and deep-black heatsink mimic the dark feel of military-grade hardware and represent a soldier’s inner calm, focus, and precision.

Outside pure aesthetics, it’s the 7mm bezels that the GL704 is known for. These are by far the slimmest we’ve seen on any Asus ROG laptop. It really brings out the lovely display. 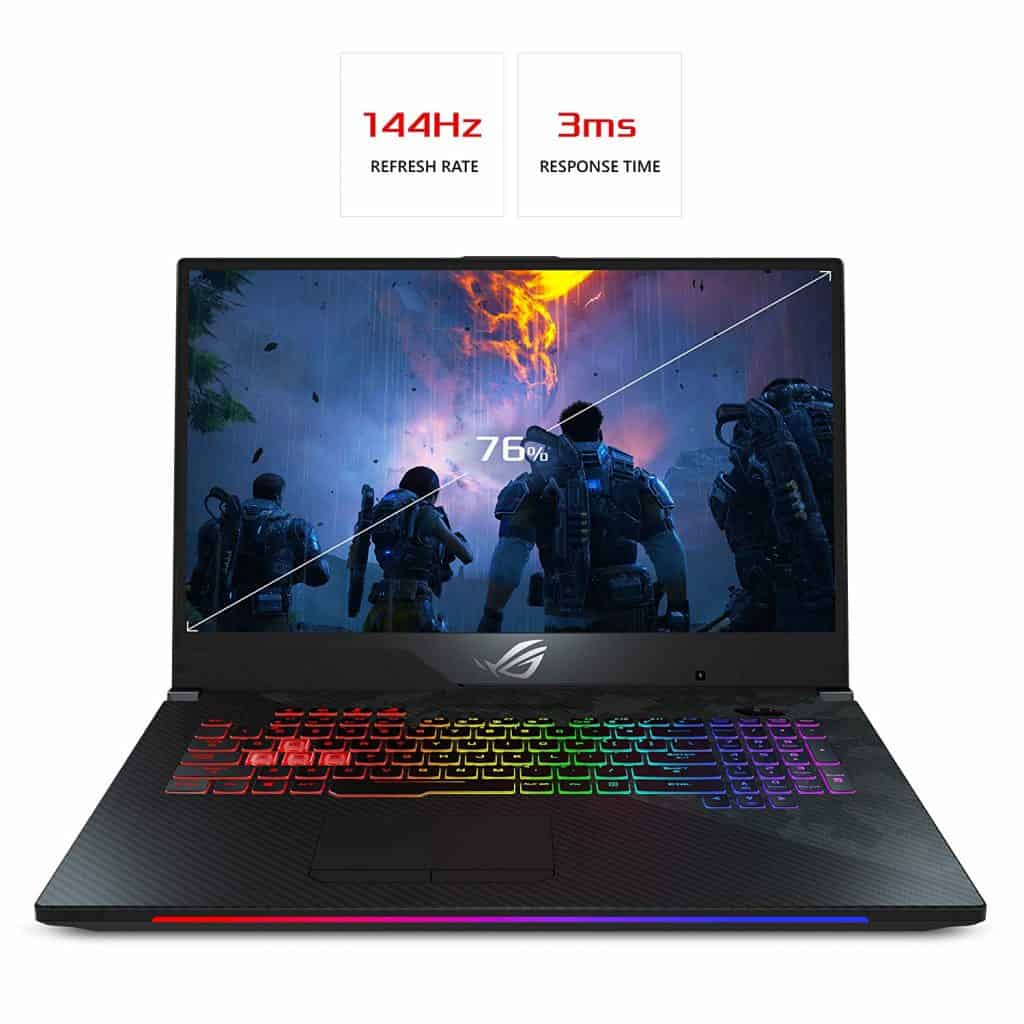 The display is the highlight of any laptop considering that’s where you spend most of your time looking while working or gaming. Thankfully, Asus included a matte IPS display with a native 1080p resolution and 144Hz refresh rate which delivers big color & crisp detail, and a smooth gaming experience respectively. The 144Hz is great for ardent competitive multiplayer gamers.

Consequently, viewing angles on the Rog Strix II are great, images look sharp and free from any graininess that dull displays suffer from. Also, the display achieves an average brightness of 291cd/m2 which is pretty average, but enough to clearly define objects on the screen while gaming or watching movies.

The Asus ROG Strix II GL704GW’s matte display makes it possible to use outdoors, however, not so much under direct sunlight (images look washed out). If you really have to go outside, we suggest finding shade wherever possible or at least going out on cloudy days.

The ROG Strix II packs plenty of ports on this chassis. The bulk of the ports are now along the left edge. The ports include an AC adapter, Gigabit RJ-45 port, mDP 1.2 port, HDMI 2.0 port, three USB 3.1 Type-A ports, and a 3.5 mm combo audio. The right side houses an SD reader, USB Type-C Gen. 2 port, USB 3.1 Type-A Gen. 2 port, and a Kensington Lock. It’s hard to complain about such a suite of options, with two potential video outputs. However, we would have also loved to see support for Thunderbolt 3.

On the wireless side of things, the laptop includes support for 802.11ac Wi-Fi and Bluetooth.

As far as components go, the CPU and GPU are soldered on the motherboard leaving only the RAM, storage and the Wi-Fi access for an upgrade. Considering truly upgradeable gaming laptops with swappable GPU and CPU are slowly becoming a not so new concept, we would have loved that here. Asus should follow in the footsteps of the Alienware Area 51m laptop and make this a reality considering it costs just as much as some of the Alienware configurations.

Rocking the high-end Intel Core i7-8750H processor, the Asus ROG Strix II is capable of unleashing its wrath on any task you throw at it. Given that the processor is hexa-core with 6 cores, 12 threads, 2.2GHz base clock speed, 3.9GHz Turbo boost speed, and 4.1 GHz on all four cores it’s no surprise it’s powerful.

Asus packed a 16GB memory for this unit and thanks to it, one can easily crunch numbers, steam on some games, browse on multiple Google Chrome tabs while supporting productivity programs like spreadsheets and Ms. Word. The system can support up to more than 15 tabs open in Google Chrome while running YouTube videos and streaming Twitch. One of the few things that remain upgradeable on this laptop is the memory and storage. For this unit, you can upgrade the memory for better performance.

Storage is one of this Asus ROG’s Strix laptop’s strengths. Inside it flaunts a 512GB PCIe Solid-state drive storage and 1TB mechanical hard drive. In summary, this amount covers all the bases whether you want to save bulk games, multimedia or videos. With the SSD, data is retrieved fast and apps and programs load pretty fast as well. You can upgrade any part of the storage with the components you want comfortably.

One thing we would have loved to see here is the capacity to swap out the CPU and GPU like on the Alienware Area 51m. It’s slowly becoming a not-so-new concept and we hope Asus will pick it up at some point. That should help DIYers have the ability to switch out their own cards.

For this GPU Nvidia used the TU106 chip and it includes features like Deep Learning Super Sampling (DLSS) and Real-Time Ray Tracing (RT), which when combine, creates a more realistic lighting effects than older GPUs based on the company’s Pascal architecture can (if the games support it). The only thing that is similar between the two is the memory that is constant at 8GB.

With the new ray-tracing and tensor cores, the RTX 2070 performs a lot better in current triple-A games and brings the possibility of 4K and high detail settings.

As seen, the system is capable of playing at the highest settings possible without any frame dips. At Ultra and QHD settings, it comfortably manages 60 fps, therefore, proving its versatility. 4K setting is playable on some games at almost 60 fps which is more or less average.

The keyboard doesn’t change from its GL703 predecessor despite the generation leap. It still is a comfortable easy to type on the keyboard with 1.8mm key travel where 1.5 mm is considered decent. The keyboard is also backlit but not with per-key RGB lighting. The lighting is the same quad-core RGB lighting.

The touchpad is similarly satisfying. At (~10.7 x 5.9 cm) it is slightly smaller than the GL703 (10.4 x 7.1 cm) but this new generation incorporates new mouse keys. The two keys are easy to use and offer shallow feedback and satisfactory click. The trackpad itself is precision-enabled, super smooth and responsive.

The battery on this ROG Strix II is 66Wh which is smaller compared to the predecessors 74 Wh. Nonetheless, runtimes have improved just slightly over the years for a total of 4.25 hours in normal productivity use over Wi-Fi and 1 hour under load. Considering this is a 17-inch laptop with Full HD,  4.25 hours is more or less average. The battery charges almost empty to full capacity in 1.5 hours. The Alienware Area 51m taps out after 2 hours 26 minutes.

The Asus ROG Strix II GL704GW-DS76 certainly looks, feels and performs like a champ; a force to reckon with. Its design is appealing, the build quality is strong, display 144Hz, the performance is impressive and battery relatively long-lasting. One would easily argue that the price is much higher than the budget gaming laptops we’re used to. But again, this is not an ordinary laptop and its high-end features don’t allow it to be one. For the most part, the Asus ROG Strix II GL704GW-DS76 brushes shoulders with the top-tier machines.

Some of its weaknesses are it runs hot and loud so much so that the fans drown out the speakers for gaming. The GL704GW drains the battery and uses 1 hour while gaming. On the whole, it is an excellent gaming laptop with a few drawbacks.

link to How to Fix Your SSD Not Showing Up

If you purchased an SSD to replace your HDD, it could be frustrating if your new drive refuses to show up on your computer. Luckily, you can fix this issue quickly in most cases, and you do not have...

Continue Reading
link to Can You Connect AirPods to Xbox One?

AirPods have become a popular choice for wireless earbuds because of their ease and simplicity. They are very convenient to use, so you might wonder if you can use AirPods as a headset for the Xbox...