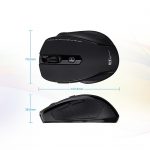 The VicTsing MM057 2.4GHz Wireless Portable Mobile Mouse is a decent entry-level gaming mouse with an array of features that mimic premium gaming mice in the industry. It is simple but overly precise for the price it starts with which is a great advantage and the underlying reason for major sales across the budget type of mice platform.

If you wish to replace your mouse for a simple wireless entry-level gaming mouse, the VicTsing Wireless Portable Mobile Mouse could be a great device in your corner. It boasts of a sturdy built body, wireless advantage, 800 to 2400 DPI settings all at a great starting price that’s really hard to look away from.

The VicTsing Wireless Portable Mobile Mouse is a great little device for those tired of wired mice. If you’ve had a gaming mouse before don’t expect the VicTsing MM057 mouse to turn heads (yours included) or drop jaws either. But it will definitely get the job done. From a design perspective, it is made of black plastic that covers most of its body lining. That is inclusive of internal mechanical parts such as the shafts and wheel. There are a couple of curves that cause the mouse to appeal. Those are particularly the contoured corners laced with rubber on either side of the mouse for your finger’s comfort. It’s a great resting place that’s comfortable to lay your fingers as they work.

Additionally, from a distance, I did note some striking resemblance/ feature of a gaming mouse on the VicTsing Wireless Portable Mobile Mouse; raw appeal and animalistic facial expressions most common to gaming mice that give the VicTsing a bold air of sophistication. I mean, it’s not exactly the Razer DeathAdder Chrome, the Corsair M65 RGB or particularly the Logitech G302 Daedalus Prime MOBA Gaming Mouse that looks like a cobra’s head, but it sure does have a design certainly inspired by a reptile.

Moving on, unlike common gaming mice, the VicTsing MM057 Mouse is smaller than average measuring only 3.1 x 4.5 x 2 inches and weighing 3.2 ounces which smaller than its rivals; the Logitech M510 Wireless Large Mouse – (910-001822) (measuring 4.72 x 1.61 x 2.56 inches, 4.55 ounces) but inches larger than the AmazonBasics Wireless Mouse with Nano Receiver (MGR0975) measuring 2.28 x 3.94 x 1.57 inches, 3.52 ounces. I have large hands and the mouse almost disappeared in my palms but I quickly got the hang of it minutes into using it. The svelte design compounded with its lightweight nature work in tandem with four padded feet, at the bottom, to create a smooth glide while working.

The mouse version we reviewed is black but it also comes in a variety of colors: Black, Purple, Grey, and Red. From a general view, it has all the common mouse features that a standard mouse has; a scroll wheel and two buttons for clicking (the right and the other left). What makes it stand out from the standard mice is additional buttons on the left side which we’ll discuss later on. The left and right buttons have a slight click and so does the scroll wheel that sits right at the center, but that isn’t a deal-breaker either

The south of the scroll wheel is home for the DPI button that boasts of 5 adjustable settings ranging from 800 to 2400 CPI. The CPI settings help control the speed of your mouse cursor depending on your use for it. Every press on the button summons a red indicator which response with a red flicker every single time you press it. Usually, a single press summons the 800 setting and the light will flicker once. Pressing the button twice summons two flickers and which indicates the 1200 settings. Here is a list for detailed consecutive CPI button presses and their responses:

How to set CPI:

Worth mentioning while still on buttons is that the VicTsing Wireless Portable Mobile Mouse has two extra buttons on its right side. These are extra features that help with forwarding and back movements and they can come in handy especially when gaming. This is a feature some gaming laptops have lately most vividly seen on the Corsair Gaming SCIMITAR RGB MOBA/MMO Gaming Mouse that brags of key slider mechanical buttons.

The hood of the VicTsing bares a couple of things to reveal. The mouse runs on an AA battery located at the under section of the mouse. The battery can easily power the mouse for months depending on usage but thanks to the light power consumption of the mouse in general. The caveat to this mouse power situation is that there is no warning for when the battery is low; you sort of have to figure it out. Unlike the VicTsing, the TeckNet Classic 2.4G Nano Wireless Mouse enjoys an LED battery indicator that ensures you never get surprised by low battery power again. It warns you if the charge is running low…Sweet!

To plug in the USB receiver to a laptop, you have to open a small section beneath the mouse; adjusted to the AA battery and the optical sensor. It is a relatively easy process and for me, it took seconds to get it ready. The Nano USB receiver is a 2.4GHz wireless transmission and ensures s swift connection to your laptop. While writing this article, I sampled the DPI settings on from 800 to 2400 and ended up loving the fast and detailed response, especially from the 2400 configuration. The latter is great for detailed work like technical drawing and tackles such with great precision.

Best of all, you have a 15 meters radius to work with…if you can operate that far from your home laptop/device! For all those with entry-level gaming laptops like the Razor Blade Stealth, better yet gaming rigs like the CUK MSI GS73VR Stealth Pro the VicTsing MMO57 mouse is a great friendly asset on your corner for a reasonable price.

The VicTsing Wireless Portable Mobile Mouse is a decent mouse with great DPI customization, performance, and a contoured design. It works best for formal work settings and day-to-day tasks. At 3.2 ounces it can be easily carried around with your laptop. For the price it comes with, it has an edge above its rivals and as a result, receives the Editor’s choice for a bestseller entry-level-gaming mouse.