The SkyTech RTX 2080 Oracle X desktop is a simply designed prebuilt system for gaming enthusiasts. It packs some of the most high-end features (including AMD Ryzen 7 2700X and Nvidia RTX 2080) which translate to excellent overall performance, high 1440p gaming and is capable of 60fps 4K gaming. 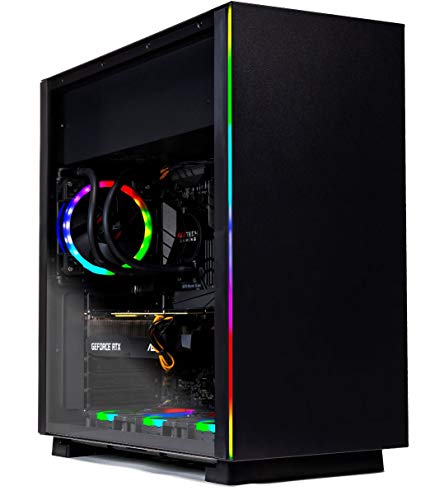 The SkyTech [RTX 2080] Oracle X is a performance-first boutique PC maker that makes prebuilt systems without the pomp and color of its competition. Instead, SkyTech squeezes out all the juice from high-end components and fits them into the unassuming case.

The SkyTech [RTX 2080] Oracle X is the next step for users who have their foot in the door for PC gaming. If you want to upgrade to a PC that delivers more than just 1080p gameplay, the Oracle X is a great value choice. Inside, it packs an AMD Ryzen 7 2700X 8-Core processor, 16GB memory, 1TB mechanical hard drive and Nvidia GeForce RTX 2080 with Real-Time Ray Tracing.

Further still, you get all that at an affordable price and even have the choice to upgrade in the future. It’s an ideal gaming PC that’s ready to game right out of the box.

Premium gaming desktops draw most of the attention with features and components as flashy as their case lighting. But most users prefer something affordable, something a bit more reasonably priced. The SkyTech RTX 2080 Oracle X easily fits the bill with its modest low toned approach to aesthetics. Its sleek-all-black chassis is made of aluminum which feels strong and is of high quality. Every side features a plain brushed-metal finish, save for one left side panel.

Generally, it’s an ordinary build without much of a gaming theme except for a thin RGB lit strip on the left edge of the case. The front panel is not polished plastic as is common for other prebuilt PCs like CyberPowerPC. That said, but left panel is see-through glass; a nice touch to the overall design. The design appeals not only to gamers but because of its low toned nature it fits as a PC for professionals in offices as well.

Speaking of side panels, it’s relatively easy to remove the left one to access the interior. There are some few screws you have to get out of the way (the access job isn’t too-free) to get inside. The interior reveals a neatly done cable management. Well, it’s not the best, but it definitely does point to the same philosophy of the exterior; clean and immaculately assembled. Moving on, the case has enough space for future expansions should you ever need to upgrade say the memory, storage or graphics.

The port system is healthy and it sports a fair share of ports to connect to your favorite devices. The front top edge has a power button, two USB 3.0 ports, a microphone jack, and an audio-out jack. The rear section holds more ports including 3 DisplayPorts, a single HDMI port, and one USB 2.0 port. The DisplayPort and HDMI port make it possible to connect to external monitors. You can have as high as triple monitor setup with this many ports.

The SkyTech Oracle comes with the AMD Ryzen 7 2700X processor, AMD’s flagship CPU. The processor hit the shelves with a bang and since then, it’s difficult to recommend an Intel core processor over the new Ryzen 2 CPUs. The scuffle between Intel an AMD has always been resulting in the former offering better single-core and gaming performance, while the latter taking the win for better multi-core performance.

However, since AMD Ryzen 7 2700X showing up, the narrative has changed. The Ryzen 7 2700X sports the same eight-core, 16-thread configuration as the Ryzen 7 1800X and 1700X of the previous generation. But the improvements AMD has brought with the Ryzen 7 has made the processor increase its speed.

It comes with a significantly faster speed of 3.7GHz base clock and 4.3GHz on Turbo Boost. The high speed and hyper-threading across its threads make this system great for workloads such as gaming and encoding.

Processor aside, the SkyTech [RTX 2080] Oracle X sports a 16GB DDR4 memory and 1TB mechanical hard drive. We have no qualms with the 16GB memory. Normally, 8GB is the minimum for any gaming PC so with 16GB you can be sure you won’t be running out of memory any time soon. It should be more than enough for any game you want to play and also run apps in the background. Better yet, it makes your PC ready for 4K gaming and makes it more future-proof.

As far as storage needs are concerned, the 1TB mechanical hard drive is plenty. It should provide enough space to save your games, multimedia, music, movies or data files on your computer. There’s only one caveat with the HDD. With the 240 GB SSD storage solution, you get fast boot times and fast loading of software and apps.

What we loved above everything else on this SkyTech Oracle X PC is the combination of the AMD Ryzen 7 2600X processor and the RTX 2080 graphics card. The two make a potent gaming PC capable of pushing high frame rates and 4K without chocking. The Nvidia GeForce RTX 2080 is the next generation Turing flagship from Nvidia. It is the second-highest after the RTX 2080 Ti and it brings to the table a good balance of high performance and budget price.

Before we get down to real gaming performance, let’s touch a bit on specs. The RTX 2080 comes through with a new set of 46 RT Cores and 468 Tensor Cores which have much to do with real-time ray tracing and artificial intelligence-powered computations. It might sound a bit technical for now because it’s still all new, but simply put the immediate effects RT Cores and Nvidia RTX brings is it transforms puddles, glass, and other reflective surfaces into mirrors.

Wondering why this PC is priced the way it is? Well, that’s definitely because of the RTX 2080 graphics card, but the card makes up for itself in performance. If anything, other than the RTX 2080 Ti, the RTX 2080 is the best card out there and significantly a better performer than the GTX 1080 Ti and Titan XP.

In real-world gaming runs, it manages to achieve 40 fps on Shadow of the Tomb Raider at 4K and the highest settings available. In Destiny 2, it also delivers even better numbers with frames between 60-75 fps, on 4K and Ultra settings. As for Battlefield I, Civilization VI, and Deus Ex: Mankind Divided, the Oracle X delivered well over 60 FPS across all game settings, even in 4K resolution.

Bottom line, if you want that sacred, butter-smooth frame rate at Ultra-HD resolutions, there’s no other card that can deliver such performance other than the RTX 2080. It is no doubt a great choice by SkyTech and one that will see great performance for most, if not all AAA gaming titles. The RTX series graphics delivers more consistent results across 1080, 1440p, and 4K resolutions compared to GTX series cards.

If you’re one of those people who love performance over design and aesthetics, the SkyTech [RTX 2080] Oracle X is definitely in your zone. With its powerful AMD Ryzen 7 2700X processor and RTX 2080 graphics, it boasts of strong performance that competes with pricier PCs in the industry. Also, it’s powerful for gaming as well as basic home and office productivity.

You won’t be disappointed in run-to-the-mil workloads such as web browsing, media streaming, office applications, photo editing and everything in between.

If you’re serious about gaming, the SkyTech [RTX 2080] Oracle X has more than enough to get you through. Between the AMD Ryzen 7 2700X processor, RTX 2080 graphics card, liquid cooling, plenty of memory and spacious interior, you have more than enough to expand/upgrade if you ever wished.

But even if you don’t, the features set coupled together offer more than enough power for computational tasks and gaming. We recommend the SkyTech [RTX 2080] Oracle X as a go-to gaming PC for budget gaming enthusiasts.