The Skytech Gaming ST-SHADOW-II-002 is an elegantly designed desktop with gamer aesthetic and gaming-themed color placed in check. With its AMD Ryzen 5 1400 processor, 16GB DDR4 memory and Nvidia GTX 1050 it’s a powerhouse for HD gaming. For less than $900, it’s a sure promise of gaming prowess in entry-level gaming desktops.

It’s no match against its brother, the Skytech Legacy (RTX 2070) Mini, but it has the brute strength to give an impressive performance for its price. We recommend it as our Editor’s Choice for budget entry-level gaming desktops. 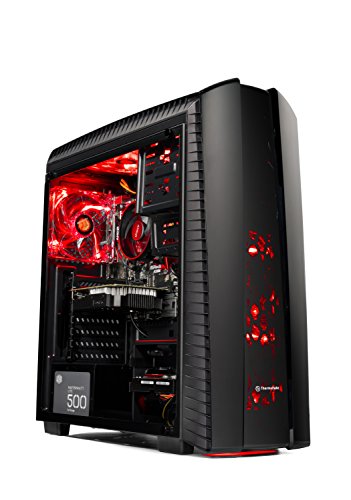 Just like the Skytech Archangel 1050Ti Gaming desktop, we reviewed last year, the Skytech Gaming ST-SHADOW-II-002 is a gaming desktop for the entry-level enthusiast or beginner. Hardcore gamers will not find a home here, but users who want to test the gaming world would enjoy its power. The Skytech Gaming ST-SHADOW-II-002 is much better value than the Skytech Archangel 1050Ti thanks to its GTX 1050 graphics card and updated AMD Ryzen 5 1400 processor.

If you’re looking for a productivity PC with gaming potential and the ability to push high-frame rates, the Skytech Gaming ST-SHADOW-II-002 is a great choice.

While the design and color scheme represents yet another red-and-black chassis in the sea of red and black themed gaming desktops, its creative design and side panel are a crowd-pleaser.

The red lighting piercing through the etched images on the front face of the desktop gives the sensation that the PC is ready for battle. A pair of raised, black rubber feet along the bottom lift the PC from sitting flat on the floor/desk. Meanwhile, the ceiling is home to a couple of ports and the power button which we honestly appreciated for their convenient placement. We discuss the former on the ports section.

Like the Omen desktop, the Skytech gaming desktop boasts of tool-less design. The side panel pops open effortlessly; that’s thanks to four thumb screws holding the glass in place. This gives you easy access to the interior, especially if you’d like to upgrade or customize. Elsewhere, the Skytech Gaming ST-SHADOW-II-002 measures 19.3 x 18.6 x 7.9 inches and weighs 29.9 pounds placing it on the heavier side of the spectrum.

The Skytech Gaming ST-SHADOW-II-002 is not bursting with ports, but it definitely enough slots, jacks, and inputs to support a modest gaming battle station. While the front face of the PC has no ports (presumably to maintain its aesthetic appeal), the ceiling is packed with a host of ports. You’ll find two USB 2.0s, a single USB 3.0 port, a headphone and microphone jack (each separate from the other), and a power button. 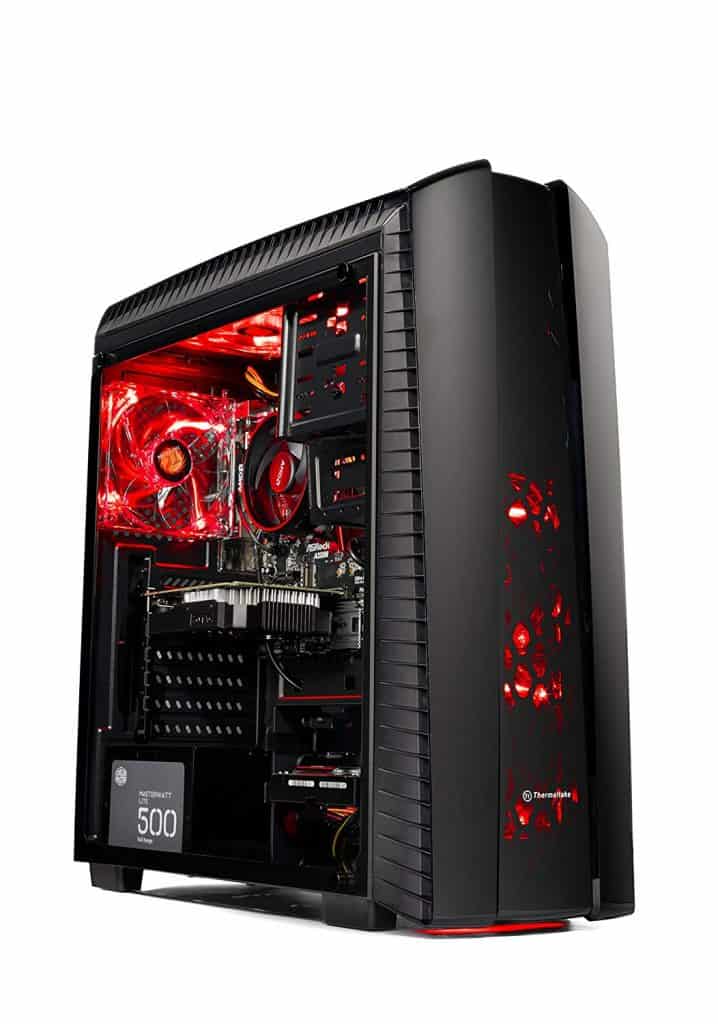 The location of the USB ports is prime for easy access while transferring data or files.

The rear holds the bulk selection of ports including some courtesy of the GTX 1050 graphics cards. I’m talking about the Dual-link DVI, DisplayPort (version 1.4), and HDMI. Also housed at the rear are four USB 3.0 ports and a single USB 2.0 port.

The Ryzen 5 1400 has a base frequency of 3.2 GHz and can reach up to 3.4 GHz via Turbo (up to 2 cores). The good news is that the processor paired with the GTX 1050 graphics card is designed to handle games and applications to guarantee top-notch gaming performance.

Under the hood, working together with the processor of this beast is 16GB of DDR4 memory. Considering 8GB is normally considered the standard amount of memory required to handle most tasks, graphics workloads, and gaming, the 16GB memory on this PC is more than enough. First and foremost, the 16GB makes it easy for this device to multitask.

It easily tears through 40 Google Chrome tabs, 1080p YouTube video, and Spotify all while a game runs in the background. Ideally, with 16GB you should be able to do basic tasks such as web browsing, office productivity, stream music, and video online, all the way up to gaming and video rendering. Skytech outdid themselves here. Should you feel the need to upgrade the memory though, you can boost it up to 32GB.

The Skytech Gaming ST-SHADOW-II-002 is saddled with a 1TB and 7200RPM hard drive which is rather spacious storage. It can easily store multimedia files, games, music and movies without straining. Still, if you want blazing-fast transfer rates, we recommend adding a solid-state drive. A 256GB SSD would be a good amount to start with considering SSDs are pricey storage options.

Thanks to an Nvidia GTX 1050 graphics card, the Skytech gaming SHADOW-002 does exactly what it sets out to do. The GTX 1050 can hold its own in graphics performance and gaming. It excels FHD and 1440p performance, producing silky smooth frame rates, with at least 60 fps on games like GTA V. The card faces competition from AMD in the form of Radeon RX 480. Both have great gaming performance and produce almost similar frame rates in some games.

Moving on, the GTX 1050 is Nvidia’s cheapest and VR-Ready graphics card, which is great for users looking to buy a headset soon. The card also adds another layer of ports to the rear of the desktop. You get three DisplayPort connectors, an HDMI 2.0b port and a DVI port here. The DisplayPort 1.4a connectors are ready for HDR gaming, too.

We took the GTX 1050 card through its paces to see how it performs in various games Here are a few benchmark scores:

From the benchmark scores, it’s undeniable that the GTX 1050 is a great graphics card, offering plenty of potential for overclocking while also being an impressive performer in VR. On the whole though, while it is great, there are better GPUs out there (RTX 20 series GPUs) and the GTX 1050 can’t compete with such. So if want high frame rates, graphically-intensive games are out of the question, unless you seriously lower both the settings and your expectations.

The Skytech Gaming ST-SHADOW-II-002 is a ready-to-go-gaming desktop that’s a good fit for its category. For its price, it sports a stylish modern gaming design, RGB backlighting to set the mood, a rich feature set, and plenty of ports for easy connectivity. We loved that its easy to access the inside through the tool-less side panel and the side through a glass side panel that gives the desktop its character.

The inside is straightforward and cleanly assembled and you can upgrade the components whenever. On the whole, the Skytech Gaming ST-SHADOW-II-002 delivers outrageous GTX 1050 grunt and blistering CPU speed in an attractive, super-compact chassis. We recommend it among the top picks of our Editor’s Choice entry-level gaming desktops.

At this price point, there are a couple of alternatives. The first is the CyberpowerPC Gamer Xtreme VR GXiVR8500A desktop that sells for roughly the same amount our unit is tagged for. Admittedly, this CyberpowerPC offers better value than our unit thanks to a more modern feature set. Inside it packs a Intel i5-9400F processor, 8GB DDR4 memory, NVIDIA GeForce GTX 1660 Ti (6GB) graphics card, 120GB SSD and 1TB HDD for storage.

Looking at the specifications, it has a better processor and graphics card and comes with 120GB SSD.  Between the two desktops, the CyberpowerPC Gamer Xtreme VR GXiVR8500A is definitely the better choice here.

For around the same price as our PC, the SkyTech Shiva gaming PC delivers better performance thanks to a better assembly of features. If you’re an avid gamer, you’ll benefit from the remarkable 1080 and 1440p gameplay it offers. Inside, the SkyTech Shiva desktop packs a Ryzen 5 2600 6-Core 3.4 GHz processor, NVIDIA GeForce RTX 2060 6G graphics card, 500G SSD storage, and 16GB DDR4 memory.

Yes. The Skytech Gaming ST-SHADOW-II-002 certainly is worth your hard-earned money and it’s got the performance to back it up. However, if you have an extra 40 bucks, the CYBERPOWERPC Gamer Xtreme VR GXiVR8500A is the value budget gaming PC to go for.