The iBuyPower Trace 9230 isn’t an off the shelf, mass-produced desktop. While the chassis and certain internal parts are all branded, they were all handpicked and expertly assembled to create the explosive experience that is the Trace 9230. 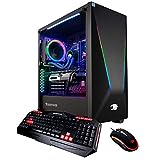 Design-wise, the chassis is nothing new.

We’ve seen it before across most of the iBuyPower builds with little edits here and there. For our particular unit, however, it borrows its design cues from the iBUYPOWER Trace 9220 Gaming Desktop and iBUYPOWER Elite Slate2 084i which we’ve recently reviewed.

Similar aspects in these designs is a solid built frame and chassis, a window of tempered glass replete with colorful RGB lighting, and four thumbscrews that make it simple to access the inside. When this machine turns on, it’s aesthetically pleasing to the eye with it’s rainbow of lights.

The iBuyPower Trace 9230 comes with a dimension of a mid-tower, at 19.48 x 8.54 x 19.76 inches. Most of the build is metal except the front face which is made of polished plastic. The left side panel is tinted tempered glass while the right is pure metal. Getting inside requires minimal effort as all you have to do is undo four thumbscrews on the left side panel to get the glass off.

The HDD bay, power supply, liquid cooling vents, and cables can be seen upon opening and you can see that there are open slots for storage expansion. The side panel allows the RGB lit interior to shed its light out giving the desktop an aggressive gamer look.

A magnetic detachable filter covers the top portion of the ceiling right next to the ports. It acts as an organized ventilation system that lets out hot air from the processor and the system. It also acts as a dust-filtering airway to let in air for cooling the system. It’s definitely an amazing way of maintaining the system unclogged with dust and running in good condition.

Just like other desktop brands, iBuyPower includes a complimentary keyboard and mouse with this desktop. The two are standard and won’t deliver the sweet, responsive click of a fresh mechanical keyboard or precision of a gaming mouse. For better performance, we recommend going for a full-fledged gaming keyboard and mouse.

One of the other major wrinkles with this unit and generally CyberPowerPC PCs is that there is no optical drive that might not sit well with some users. While the optical drive is slowly being phased out, it still is a valid feature for some users.

For this unit, however, you will have to get an external optical drive or download your software online. Some websites like Steam and Origin offer download services for gamers looking to purchase video games from your computer via the cloud.

As far as ports go, the Trace 9230 comes with an almost similar port system as the iBuyPower Trace 9240. The front face flaunts two USB 3.1, microphone and headphones, and a Reset button. Meanwhile, the rear is home to two USB 2.0, two USB 3.1, one RJ-45 Network Ethernet, and Audio 7.1 channel.

The graphics card brings to the table a few more ports including a single HDMI 2.0b and two DisplayPort 1.4, alongside a VirtualLink connector. The HDMI and DisplayPort are essential when setting up a dual/ triple monitor setup.

Other connectivity options include 802.11AC Wi-Fi.

Obviously, the high-end i9-9900K configuration is the most powerful configuration available. It includes all the muscle to power through playing most modern AAA titles at 1080p, 1440p and even 4K. But I digress.

Moving on, the Core i7-9900K has eight-cores, 8-thread CPU with a base frequency of 3.6GHz and capacity to overclock to 4.9GHz to make short work of almost any task. Despite having stonking 8 threads, it’s Intel’s first 9th Gen chip that does not support Hyper-threading which makes it fit the same shoe as its predecessor, the Core i7-8700K.

As it is, the i7-9900K excels at video rendering and editing and gaming. The eight cores are great in parallelized workloads and single-threaded performance because of the high Turbo Boost. Generally, games benefit from higher clock speeds than they do from more cores, so they higher speeds help. Moving on, Intel included liquid cooling to step in when temperatures start skyrocketing.

Working alongside the processor is 16GB DDR4 memory, 1TB mechanical hard drive, and 240GB Solid-state drive storage. In this pinnacle era of PC gaming, 16GB is considered a pretty standard for gaming. The general rule of thumb is, 4GB is nice of modern gaming applications, 8GB recommended to avoid performance issues and 16GB best for AAA gaming titles.

You can easily listen to streaming music and live chat on a second monitor at the same time with the 16GB available.

As far as storage goes, we consider 1TB hard drive storage plenty for storing data and storing video games. Meanwhile, the 240GB SSD ensures performance is impressive and consistent as required. It improves boot times and loading of software so that they are short and fluid smooth.

When it comes to gaming it comes equipped with the Nvidia GeForce RTX 2070 graphics card that our unit comes with. This is one of the newly released line of Nvidia graphics cards, which is why it’s so popular to the majority of PC gamers. Out of Nvidia’s Turing card, the GeForce RTX 2080, RTX 2080Ti and RTX 2070, the RTX 2070 is the more popular and is the best when it comes to price to performance ratio.

Not only is the RTX the best cost-effective Turing card, but it’s also leagues above its GTX 1070 predecessor in terms of performance. It’s a high-end GPU that is very affordable.

The RTX 2070 has significantly fewer Ray Tracing (RT) cores and AI-powered Tensor cores among the Nvidia’sTuring RTX lineup. Because of that, it is the least powerful card in the lineup. However, there still aren’t any real-world ray tracing or deep learning super-sampling (DLSS) benchmarks, so we don’t know yet how well this GPU will handle Nvidia’s latest graphics technologies. Most triple-A games also don’t use Ray Tracing so it shouldn’t be a dealbreaker.

The RTX 2070 does not support pairing multiple GPUs through SLI which is a letdown if you’re planning to game on higher resolutions while having high FPS (frames per second). Nvidia did introduce a new way of pairing Turing cards, one with higher bandwidth (NVLink Bridge connector). The RX 2070, however, doesn’t have this new connector which means if you want a multi-GPU setup you will have to spend more for a higher-end Nvidia GPU.

As I mentioned earlier, the RTX 2070 is the lowest card in the Turing lineup and that also applies to performance. It has the lowest amount of Tensor cores and also has the lowest performance of the three in terms of HD gaming and 4K. The difference in performance isn’t noticeable in lower resolutions. On the flip side, there is a stark difference compared to its predecessor; the GTX 1070.

The RTX 2070 reaches double-digit frame rate increases over the GTX 1070, GTX 1070 Ti and other cards above that. It’s, without doubt, a remarkable graphics card that is capable of 4K gaming as a mid-range graphics card.

The RTX 2070, along with other RTX GPUs, brings Ray tracing and DLSS to the market. These features were not available on other previous cards. However, since there are no games out yet to make use of this technology, we’ve yet to see how well it will work on this or any Turing GPUs in a normal gaming session. With that said, we can still measure gaming performance without the new technology.

One of the Intel i9-9900K’s biggest downside is heat generation. The processor is fast and powerful, but consumes a lot of power and generates a lot of heat, especially under heavy load. This means that you need to have a great cooling system to handle the heat, otherwise the CPU will be suffering from overheating issues. Fortunately, iBuyPower included a water cooling solution to handle this problem.

Another thing they did is include an ingeniously designed case with improved side panel vents for better airflow. The design is clean as it freely releases accumulated heat to escape therefore reducing heat build-up in the system. This synergizes well with the removable magnetic filter that also acts as a vent for hot air to escape.

The processor comes with a stock cooler, a 120mm fan. If you’re planning to do heavy gaming, we recommend changing this to a 240mm fan for better heat management.

All told, the iBuyPower Trace 9230 is a fantastic value prebuilt gaming PC. It features some of the best components in the industry making it a lethal foe in your corner. Featuring an Intel i7-9700K processor, 16GB of memory, 1TB of storage, 16GB of Optane memory and Nvidia RTX 2070 graphics card the Trace 9230 is simply ready out of the box.

The design and aesthetics are also great which reflects the Trace 9230 clearly has a personality of its own. The distinct tempered glass and LED-lit side panel make it stand out like a sour thumb. It definitely earns high marks for balancing its compact design with end-user serviceability.

Ultimately, we are confident that most buyers would be pleased with this machine. Most especially users looking to get into the world of VR quickly and cheaply. For us, it makes a compelling argument as an entry-level gaming desktop that doubles up as a productivity PC for media creation. As such, it receives our Editor’s Choice awards for best entry-level gaming desktop.

Are There Other Alternatives?