Underneath the HP Pavilion 590-p0070 Desktop’s unassuming exterior is a phenomenal family computer with enough power for daily productivity workloads. It performs admirably at web browsing, office tasks such as Word processing and spreadsheets and some light gaming if you’re in that headspace. 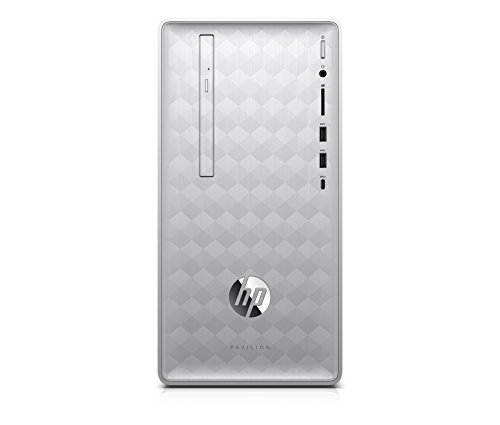 Home computers don’t have a reputation for flashy designs and HP has for a while now been the predominant brand in this area. While I’ve seen some awesome HP designs on home computers, they generally take a low-toned design or at least a business-like-feel. It’s the only explanation I can fathom for why the HP Pavilion 590-p0070 looks the way it does. But that’s not to say it’s cheap and sacrifices standard performance.

HP ensured this PC packs enough muscle to do all your home office productivity. Inside you’ll find an Intel Core i7-8700 processor, 12GB RAM, and 1TB Hard Drive storage. We’ve put this PC on the spot and compared it to other desktops in its space. Read on to see how it performs and how it stacks against other PCs.

Aesthetically, the HP Pavilion 590-p0070 strikes a good balance of style and restraint. While some might think the design is bland, the plastic silver chassis that enshrouds the metallic frame brings out a low-toned design tasteful enough for the simple at heart. A section of the chassis is also made of black powder-coated metal on which you can see the ventilation stripes on the side panels.

While the style is not flashy, it’s also not boring. I would say it all comes down to a matter of preference. If you don’t mind a budget case, then the HP Pavilion 590-p0070 is a good fit for you.

Getting inside is relatively easy too. All you need is to unscrew a few screws on the side panel. We would’ve loved to see a tool-less design to make things easier for those times when you want to upgrade RAM or add an extra HDD, but again, this computer isn’t made with gamers and tinkerers in mind. All things considered, a few screws isn’t such a bad ordeal. Once inside, you’ll notice the components are well laid out. The cable management is done well for functionality.

There’s a host of ports at the front and rear of this PC. The mix of front ports comprises a futuristic USB Type-C, two USB 3.1 Gen 1, an SD card reader, a headphone and a microphone combo and a power button. Most of the ports, though, are around back. That includes 4 USB 2.0 ports, 2 USB 3.1 Gen 1 ports, an HDMI out, and a VGA connector. Other connectivity options include Bluetooth 4.2 and 802.11a/b/g Wireless connection.

As for in-box accessories, the desktop comes with a simple USB keyboard and mouse, both of them serviceable but not remarkable.

The HP Pavilion 590-p0070 might be a home desktop, but it shines for having a powerful processor. Inside our configuration, is the Intel Core i7-8700 processor, a Coffee Lake CPU with six Hyper-Threaded cores and no overclocking potential. It has similar clock speeds to the i7-8700K processor, but because it has a locked multiplier ratio (not overclockable), it falls short in heavily threaded workloads.

Nonetheless, the i7-8700 has a base clock speed of 3.2GHz and turbo clock speed of 4.6GHz making it ideal for most tasks, even gaming if a few items are upgraded.

The system feels snappy in word processing, GIMP, web browsing, video conferencing over an online connection, and photo editing. Users running heavier programs and intensely graphic workloads such as rendering will be glad to know the processor is capable of handling such tasks. And best of all, the stock heat sink and fan are capable of handling the workload. Overall, the Intel Core i7-8700 processor provides amazing computational performance and entry-level gaming performance.

Photoshop should run just fine as long as you’re not working with huge size of files. Also worth mentioning is that decent gaming is possible, if you don’t mind slightly lower frame rates and turning down settings. We’ll handle the gaming part a bit later though.

Another plus side of this system is the 12GB DDR4 memory available. For the most part, 8GB is considered the sweet spot for the majority of users, providing enough RAM for virtually all productivity tasks and less demanding games. If at any point you plan on running a bit more demanding applications like video editing and CAD, or you’re an avid gamer, then we recommend you upgrade that to 16GB.

Anything above 16GB is subject to just how much memory is enough to handle your heavy multitasking needs. A workstation needs such amounts of memory, but for our unit, 12GB is pretty decent. Again, it easily sustains tasks such as office productivity, web browsing, media streaming, photo editing, and some light gaming.

Also included in the desktop is a 1TB hard disk which should be sufficient for professionals looking to save data, media files, movies, and even video games. We appreciate that SSDs are fast enough to keep boot-ups, software loading and game-loading times at a reasonable rate. But there is no SSD installed here so expect slower load times. However, you can add at least a 128G8 GB or 512 GB option.

The HP Pavilion 590-p0070 has no dedicated graphics card. The processor, however, comes with an Intel UHD Graphics 630 integrated card and Intel’s Hyperthreading technology which counts for a lot in some gaming titles. In this case, it gives the processor 12 threads to deal with various tasks and instructions instead of six.

Effectively, that is an advantage when running CPU intensive applications such as photo editing, video editing software, and gaming. As far as gaming is concerned, the CPU alone is fast at 1080p and 1440p gameplay.

In gaming benchmarks, it delivered the following results: Shadow of the Tomb Raider, whopping 117 fps on the highest settings. In Total War: Warhammer 2 it managed 111 fps on ultra-settings, 76 fps on Assassin’s Creed Odyssey (Ultra High settings) and 140 fps on Forza Horizon 4 (Ultra settings). On the whole, these results are great for light gaming and heavy applications.

But for gamers, they could be much better if an upgrade is made to a dedicated graphics card. Remember, a good graphics card like the RTX 20 series card might require also tweaking the power supply.

The HP Pavilion 590-p0070 Desktop is a straightforward PC for home and small office productivity. After plugging in the keyboard, mouse, monitor and power cable, you’re set to go. It’s a simple plug-and-go system that will get you through web browsing, office productivity, media streaming, and some gaming.

Simply put, it comes with all the perks, performance and upgradeability of a medium-size office, workgroup workhorse computer. We loved the fact that you can upgrade the system to be able to play some AAA titles, which makes this PC future-proof. We easily recommend it as a remarkable choice for home/office and light gaming use.

The Pavilion 590 is a great system with a good blend of features and price point. However, there is plenty of competition being that it’s a fairly standard desktop computer. Admittedly, there are a couple of other alternatives depending on what and which feature you’re ready to tradeoff. First up, with a slightly less budget (around $400) and less power, the Acer Aspire TC-885-ACCFLi3O Desktop is a great option too.

It packs some interesting components including Intel Core i3-8100 processor, 8GB DDR4 memory with 16GB Optane Memory intact, 1TB HDD storage, and an 8X DVD drive. While the processor on Acer Aspire is not as powerful as the HP Pavilion 590’s, it does come close.

The second option we would recommend for just about $20 more than the first Acer alternative is the Acer Aspire TC-885-UA91 Desktop. Inside, it flaunts a similar but slightly better processor and therefore performance. You’ll find a 9th Gen Intel Core i3-9100 processor, 8GB DDR4 memory, 512GB SSD storage, and an 8X DVD drive.

While this system also falls short of our unit, it has almost similar specs to ours making it an enticing option as well. For both systems mentioned, it is possible to upgrade the hardware for less than what HP is asking for.

Yes. Based on its rich feature set, performance and competitive price range, the HP Pavilion 590-p0070 is a winner among its competitive set.