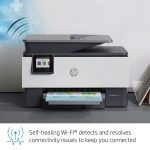 The HP OfficeJet Pro 9015 is a feature-rich entry-level inkjet printer with just the right amount of speed, output quality to make an excellent value for small and home-based offices with light to medium-duty copy and print volume requirements. It provides exceptional value for its price and is a suitable replacement for one of our last year’s favorite, the HP Officejet 8710 printer.

HP has for a while now been at the top of the printer industry, with printers for all types of use. The HP OfficeJet Pro 8710 was one of our favorites featuring competitive price, exceptional print quality, 2-sided ADF capability, efficient print speed, and NFC technology for wireless printing on PC and mobile phones. The HP OfficeJet Pro 9015 builds on that on literally every angle. From improved build quality to faster printing, scanning, built-in security, larger feeder trays, and general performance.

Right off the box, the HP OfficeJet Pro 9015 offers faster printing at 22 pages per minute, automatic 2-sided copy and scan, a 35-page automatic document feeder. All these are similar to what the OfficeJet Pro 8710 has in its feature set. The major difference between the two though is HP improves the build quality on the Pro 9015. Also, consistent users can subscribe to HP Instant ink monthly subscription program, which the printer is eligible for, to bring down the printing costs per page. Granted, the HP OfficeJet Pro 9015 is a great printer with plenty to offer at an affordable price point. But at this price, there are other competing printers the 9015 has to swim upstream. Is it worth the price surge from the OfficeJet 8710, and how does it stack against other printers in its price range?

HP has built a remarkable impression over the years for making not only ingenious AIO desktops but also interesting-looking printers. The HP OfficeJet Pro 9015 is no different here. NO one wants an unsightly printer mucking up their décor, so HP went all in for this one. The 9015 sports a two-tone blend of white and gun-metal gray chassis with almost 90-degree angled curves that come together to give the printer a superior business feel. There are no rounded corners or sloping surfaces, but the traditional look somewhat works for this printer. On the whole, though, the build quality feels sturdy. However, you will have to get used to the OfficeJet Pro 9015 taking up a lot of your cramped up home office space (if that’s the case).

Physically, it is identical to the OfficeJet 9025 printer with a few differences here and there. At 10.9 by 17.3 by 13.5 inches (HWD) and weighing 20 pounds, the 9015 is lighter than the 9025. The Brother’s MFC-L3770CDW and Canon’s ImageClass MF634Cdw (both great performers with competitive prices) are significantly more abundant in comparison.

The front face of the 9015 is highlighted by a 2.7-inch touchscreen that is the control panel of the printer. The panel has no supporting buttons or navigation keys. The panel allows you to control everything that you might want to configure or monitor from here. You can also access the control panel by going through HP’s Embedded Web Server which is loaded in the firmware on most company’s printers.

Speaking of trays, HP revised this printer’s tray capacity such that it handles the same amount of papers, virtually half a rim (250 sheets input, 60 sheets). In practice, that is more than what the Officejet 6968 and 6978 offer at 225-sheets input and 60 sheets output. It is an improvement for HP in light of past printers; it is a downgrading compared to the OfficeJet 8710’s 150 sheets of output.

In comparison to the OfficeJet 9025 (500 sheets, 100 sheets), our unit falls behind in both input and output capacity.

Like on the 9025, there aren’t as many ports on printers as there are on laptops and desktops. But that is expected. The 9015 has a single USB port at the lower left front for printing from a thumb drive. Also, the back houses another USB and Ethernet port as well as wireless capability.

Now, one of the stand-out features of this printer is that it can connect to various cloud and social media sites through web apps on the control panel or the printer’s built-in HTTP server. You can log on to the server, update your security among other features.

As if not enough, the OfficeJet Pro 9025 has an even more sophisticated mobile connectivity section. It’s only a cut above other office-centric AIO printers. Case in point, the Bluetooth 5 LE (low energy) which allows for more than a few simultaneous connections such as Wi-Fi Direct, Apple AirPrint, Mopria allowing all of these to print directly to the printer or over the internet through HP Smart App. In simple terms, that means you can use your iPhone or Android phone to print documents (all you have to do is download the HP Smart App).

As far as safety goes, HP completely outdid itself here. Instead of the traditional PINs and other convectional configurations, the printer has its firewall. From the firewall, one can control access, including to various features, by IP address, or you can configure a universal password such that there is no access to the printer. All these are great options and a heightened approach to security, which is impressive. However, I’m not confident whether they’ll be practical for the home-office setting. Perhaps for a medium-sized company or small workgroup.

HP rates the HP OfficeJet 9015 at 22 ppm for a 2-sided copy and scan, which is 2 ppm slower than its successor 9025. That is 22ppm for black and 18 ppm for color copies. Ideally, that is just the same figure the HP OfficeJet Pro 8710 offered we honestly hope HP had improved the speed here as well. That also applies to the scan speed. Both printers offer a similar scan speed of 8 ipm in black and 8 ipm on a colored copy.

The OfficeJet also has a paper handling capacity of two 250-sheet trays and a single 60-sheet output tray which is pretty rich for an AIO printer at this price point. We noted that the output tray does, however, release less output capacity at 60 sheets compared to the predecessor’s 150 sheets. Also, one of the reasons print speed is at par with the premium InkJet printers, in this price range is thanks to the two-sided Automatic Document Feeder (ADF).

The print quality of the OfficeJet 9015 is just as good as it is on the OfficeJet 9025. The text quality is impressive, almost as good as a color laser printer. The text output is well-shaped, very legible even on small fonts. You won’t see any excessive ink messing up the text even on reduced fonts. That in itself makes the printer a go-to-printer acceptable even for the most complicated business applications.

Most inkjets excel at printing photos that are at least at par with the quality you’d expect from your local drugstore. The Officejet Pro 9015 does a decent job here as an in-house printer for printing a range of documents and as a photo printer.

However, while that is true, it’s not the perfect recommended photo printer for professional photographers. It just doesn’t have the essential photo-centric features for producing higher quality crisp photos. Higher-end models offer a wealth of features that make them excel at high-quality printing pictures.

These days, all four of the major inkjet printer makers offer discount solutions on many of their printers. If you have a regular print schedule and print enough, such discounts will save you money. For HP, those discount solutions come in the form of HP’s Instant Ink subscription.

The OfficeJet Pro 9015 has some of the most efficient ink cartridges among the competition. Using the high yield cartridge, for example, running costs for monochrome printing are 1.8 cents and 8.3 cents on coloring pages. That alone gives the Pro 9015 an edge over entry-level color laser counterparts.

The HP OfficeJet Pro 9015 is also Instant Ink eligible which suggests you can subscribe to the Ink Serve at any time. With a 700-page cartridge subscription, it will cost you $19.95, which translates to 2.9 cents. That’s very economical but here’s the deal. After the 700 pages, it will cost you 5 cents for each page. Breaking it down, it means if most of your printing is in monochrome, then it’s a bad deal. However, if you rarely print monochrome and instead focus on colored print, then that is good value. Printing out a colorful and intricate Acrobat, Excel, and PowerPoint document with charts, graphs, and other business graphs is an excellent example of what might profit from multicolor printing.

The most significant strife the HP OfficeJet Pro 9015 comes with is that it has just a single input source. Other negligible reasons could be the lower output capacity level (60 sheets), which fortunately is no reason not to buy. Otherwise, if you’re looking for a fast, affordable printer, prints quality output and has low running costs, then the HP OfficeJet 9015 fits perfectly. If you need more paper capacity, the OfficeJet Pro 9025 comes with 500-sheet capacity (two 250-sheet paper trays), but you will have to shell out a few more dollars. Otherwise, if your printing needs are more low-toned and in-house, the OfficeJet 9015 is an affordable option with enough muscle to pull through.