Equipped with a Core i5 processor, Nvidia GeForce GTX 1050 graphics card, a matte 1080p display, the Dell XPS9570-5632SLV-PUS laptop is a remarkable multimedia laptop and all-rounder that doubles up an entry-level gaming laptop. It also brags of a brilliant design, plenty of ports and affordable price tag. 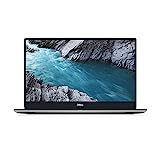 We’ve seen our fair share of laptops in our labs, but the Dell XPS series is a brand of its own. The XPS line shines as exceptional premium laptops in the business world and other uses as well. I’ve seen the Dell XPS 13 and 15 used for music production, video editing, and gaming as it fits many roles. Today, we review the Dell XPS9570-5632SLV-PUS Laptop, a configuration of the Dell XPS 15.

It stands out as a brilliant option for many uses and recently, among the top list of favorite laptops in our best laptops for mechanical engineering students roundup.

The Dell XPS design remains the same as past predecessors we’ve seen from 2016 and 2017. The lid and bottom are made of aluminum and the keyboard and palm rest wrapped in a slightly rubberized carbon-fiber material. Generally, the design feels sturdy and luxe and thankfully lacking in obnoxious gamer aesthetics. If you love subtle designs, the Dell XPS9570-5632SLV-PUS will impress you with its low toned aesthetics. It easily would pass as a business laptop among other office laptops.

Aside from performance, the display is, for the most part, the best thing about the Dell XPS 15. The laptop comes with a super thin InfinityEdge bezel around the 15.6-inch screen rendering the laptop a sleek almost bezel-less screen. This is the part most companies love and tried to follow as Dell leads. This year’s power button is deeper and Dell repositioned the webcam from the bottom left nose-intruding position to the bottom center.

If you can remember, the Camera position and lid stiffness, incidentally, were among the biggest caveats about the previous XPS 15. Unfortunately, as it is, Dell has still failed to address both issues with this refresh too. 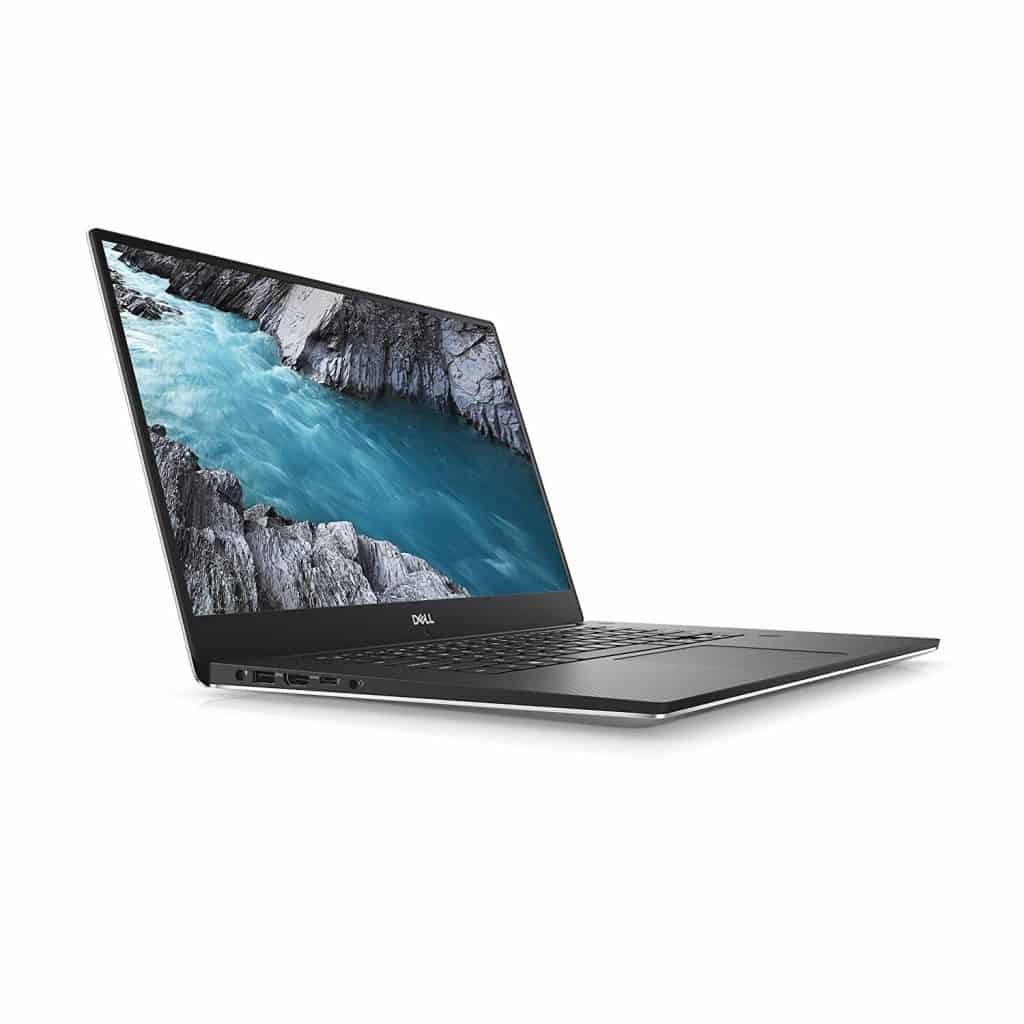 The webcam’s position compromises viewing especially when typing during video calls. You’ll end up with giant fingers occupying a good section of the frame which makes for an extremely annoying experience. Meanwhile, an overly-rigid lid forces you to use both hands when opening the laptop which is kind of inconveniencing if you’re used to using a single hand to open.

Moving on, the display comes in either 1080p or 4K configurations. Our unit rocks the 1080p non-touch version. Dell implemented on the entire screen a piece of glossy Corning Gorilla glass to ensure the screen has best-in-class protection against drops and scratches. Speaking of quality, the display achieves a decent 95.5% coverage of sRGB and 428 nits of brightness. The brightness makes the display a cut above most laptops in this price range with exceptions of a few like the Microsoft Surface Pro 2017.

The port selection is just as healthy as other parts of the laptop with a respectable amount of variety. That in itself bolsters the laptop’s credentials as a got-to-have high-end business laptop of choice Thankfully, despite the thin frame, Dell included a futuristic USB Type-C among other great things as Full-size HDMI 2.0 port. Other ports included are two USB 3.1 ports (one on either side of the chassis), Thunderbolt 3(for external video connections), an SD card slot and a 3.5mm jack.

It provides enough connectivity to cover your keyboard, mouse, external audio and monitors should you decide to connect them.

For wireless connectivity, a killer 1535 Wireless-Ac adapter is available to provide strong and reliable Wi-Fi. It handles online videos, voice, and games faster and with flair. What we didn’t see, however, is an Ethernet port but that’s okay. Compared with the Dell XPS 13 which has a similar number of ports save for the HDMI port, it’s a welcome step up. You get everything the XPS 13 has plus a few bonus ones.

Security features on the laptop include the power button which has a fingerprint reader and Noble security lock slot.

The machine is an absolute powerhouse built for office productivity, light gaming and of course to impress. Inside it harbors an 8th Generation Core i5-8300H processor, a notable improvement, if not the biggest change, since its predecessor’s 7th Gen processor. It’s also available for purchase with a quad-core i5-8750H processor or a hexa-core i9-8950HK processor.

The secret sauce for this laptop, however, is Core i5-8300H quad-core processor with Hyper-threading. It’s a step-up from its predecessor’s Core i7-7700K with relatively 5-10% better performance on single and multi-core loads. In performance circles, it is capable of reaching highs of 4.0GHz on Turbo. And as such is capable of handling CPU intensive tasks such as video editing, text editing, programming/engineering software, even gaming to some extent.

Although it can support as far as 32GB as configured, the 8GB allocated for this laptop is more than sufficient for office-based productivity. As if to confirm this, the system easily chews up any task you throw at it without breaking a sweat. It handles 10 to 20 open Chrome tabs several productivity apps and Spotify without showing any signs of strain.

As far as storage is concerned, Dell placed a 256GB solid-state drive storage for this configuration. Meaning, you can opt for a different configuration with a higher amount or mechanical hard drive instead. Considering the target audience for this laptop is users with daily home and office tasks, 256GB SSD is a good baseline.

While it makes retrieving stored data, Windows boot times and loading of games, software, and applications faster, we would have appreciated more space. If you’re planning to save your games, multimedia or movies, this meager amount might not be enough. Perhaps the best solution might be getting an external storage solution or opting for a configuration with more storage options (both HDD and SSD).

The XPS 15 shines as a multimedia and productivity laptop but it also has a few tricks up its sleeve in relation to gaming. The Nvidia GeForce GTX 1050 allows it to be the occasional gaming laptop for users who might be interested. The GPU also features in other fantastic all-round laptops we’ve reviewed such as the Dell G3 laptop. We wouldn’t advise buying the XPS 15 for its gaming perks, but if you really have to game perhaps restrain the gameplay to 1080p.

On gaming runs, the Nvidia GTX 1050 handles fast-paced shooter games such as Counterstrike: Global Offensive smoothly. It achieved a scintillating 256fps on High settings at Full HD. On Overwatch, the GTX 1050 made light work of Overwatch, achieving an average frame rate of 112fps. Lastly,  since this GPU isn’t made for AAA games, on more challenging games like Hitman it plays at medium settings and achieves a mediocre 46 fps. The Middle-earth: Shadow of Mordor also manages to strain the GPU but achieves 79.1 fps.

Other than great performance and display, battery life is perhaps the most sought after factor of any laptop. Fortunately, the Dell XPS 15 locks on 14 hours in simple productivity tasks such as video playback and web browsing on 250 nits brightness. On the flip side, long battery mileage applies to this 1080p version. The 4K display configuration is a battery hog and lasted 7hrs 14mins in our video test, somewhat shy of MacBook Pro’s 8 hours lifespan.

The Dell XPS9570-5632SLV-PUS is marred by a few flaws (such as meager storage, poor speakers) but a bunch of those are not deal breakers and can be overlooked, if not solved. However, on the bright side, there are more than a couple of positive tweaks such as more CPU cores, faster graphics, and more pixels. Others are the respectable battery life, awesome display, no-frills design, and incredibly powerful performance compared to standard Windows rivals.

All in all, the Dell XPS 15 is a phenomenal laptop only comparable to the 15-inch Apple MacBook Pro. It easily has a leg over other laptops in its space for having buckets of power and an impressively attractive design to match. As a result, we recommend it for business users seeking a high-end with a great balance for performance, portability, and functionality.