With a sleek case, versatile features and impressive performance, the CYBERPOWERPC BattleBox Essential GLC5000CPG is one PC to look out for. Its specs list and high-end features contribute most to its robust performance and positive points. It’s a premium general-purpose desktop that can do it all, from playing games at maximum settings to serving as a home workstation.

Meanwhile, its biggest caveat is it’s high priced giving its competition the green light to lead. If you can part ways with the cash, it is a great PC to have in your corner. We recommend it for users looking to get into gaming. 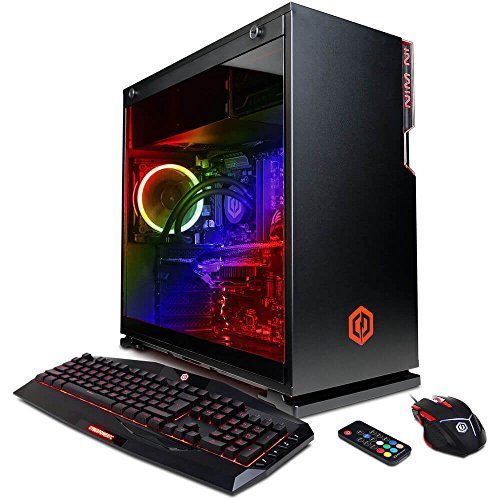 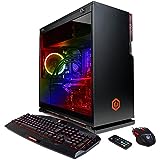 Despite the enticing lure of gaming consoles such as X box One S and handheld devices, PC gaming is alive and well. For those who know how to build PCs, that’s a fact they know all too well. But because not everyone is especially privy with building their own PC, and depend on prebuilt PCs, this is for you.

Building a PC is one problem, but finding a good prebuilt one is yet another different problem altogether. It can be an uncomfortable up-hill task for newbies. So here’s some advice. The most pivotal decision you’ll make before purchasing a gaming desktop is which 3D graphics system you’ll use. Integrated graphics are fine but they don’t make the cut when it comes to gaming on AAA titles.

Those are usually fine for 2D games. What you need is a discrete card to bring out the monster on 3D AAA titles.

The CYBERPOWERPC BattleBox Essential GLC5000CPG comes with an advance discrete Nvidia GTX 1060 card. The card gives this PC improved graphics detail and gaming performance. Other than that, this PC is equipped with exclusive features: a high-end Core i7-8700K processor, 16GB DDR4 memory and 120GB/2TB HDD combo storage. All these combine to give the GLC5000CPG the oomph it needs to bring the computing power and muscle for a satisfying gaming experience.

Update 10th Aug 2019: SInce the CYBERPOWERPC BattleBox Essential GLC5000CPG is no longer available on Amazon, we recommend checking out our next favorite Cyberpower PC desktop, the CyberpowerPC Gamer Xtreme GXiVR8500A desktop.

Our reviewed unit is as big and boxy as other gaming PCs in the market. Clad in a brushed aluminum case, this 32 pounds 8.7 x 18.9 x 17.5-inch rig cuts an imposing, desk-monopolizing figure. It weighs almost similar with the CYBERPOWERPC Gamer Xtreme GXIVR8020A4 Desktop At Amazon. But dimension-wise, the iBUYPOWER Pro Gaming Desktop PC Slate 9200 (12.5 x 25 x 21.38 inches) is a tad larger making our unit look and feel a bit more of an ultraportable in comparison. 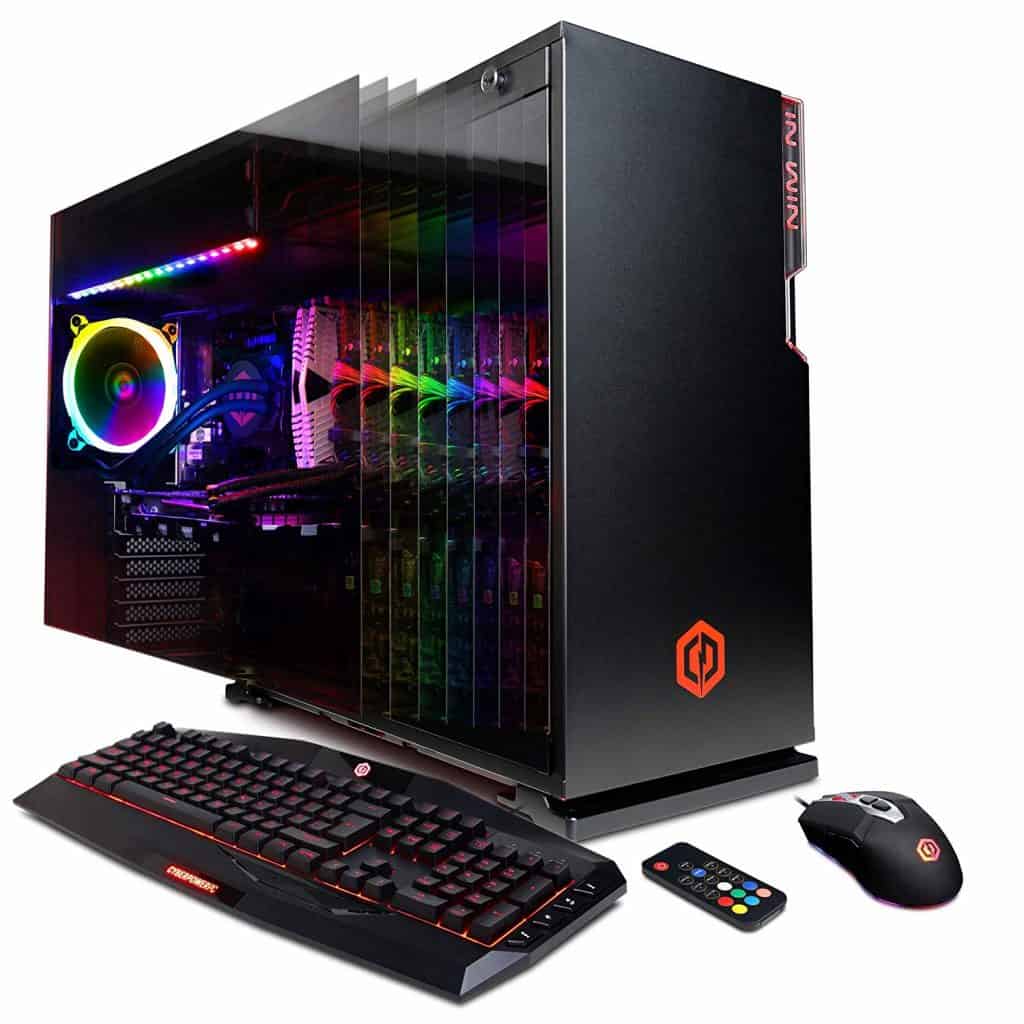 Like most CyberPowerPC PCs we’ve reviewed, the CYBERPOWERPC BattleBox Essential GLC5000CPG has a side panel made of see-through Tempered Glass. You can see the motherboard, power supply, and fans as they glow with accented colors. We loved the colors as they give the PC a Battle-station gamer feel of its own. Aesthetically, it’s sleek, attractive and apart from the lighting, pretty much understated.

There is no top-mounted handle for carrying the system from room to room. You will have to carry the PC the old-fashioned way. On a positive note, however, the PC is not a compact system limiting expansion like many systems out there. There’s plenty of space inside the case should you need to upgrade the motherboard, graphics card or add an extra 3.5-inch hard drive bay.

Functionally, it’s incredibly easy to access and maintain. The panel on the right open with a small tug on at the top and pulls away from the rest of the body without any screws involved. Once you get the CP opened, the first thing that meets you on the side is the CPU cooler. The cable management is well done as the cables are firmly rooted in a neat way making it easier to access other components.

Any powerful system needs a complete and healthy port system to stay in sync with other devices. There are a decent number of ports onboard including 2 USB 3.1 ports at the top and others at the rear. The rear holds the bulk of the ports including 4 USB 3.1 ports, 2 x USB 2.0, one RJ45 Network Ethernet 10/100/1000 and 802.11AC Wi-Fi for Bluetooth.

Should you need to use multiple monitors, the GPU has a few other ports to cover that. Thanks to the NVIDIA GeForce GTX 1060 6GB Video Card, you get 1 x DVI port, 1 x HDMI port, and 1 x DisplayPort

Additionally, it comes with 12 threads via Hyper-threading which increases processing power. Thanks to Intel’s ingenuity, the 3.7GHz Core i7-8700K processor can be overclocked to 4.7GHz meaning you get flawless and ultimate gaming performance. On the same note, we were glad to see there is a liquid cooler assist to help take the heat down a notch especially when overclocking.

Working alongside the new Coffee-Lake processor is the Intel B360 Express Chipset. It’s a budget-friendly chipset that’s quite a steal for eagle-eyed tech enthusiasts looking for performance on their systems. If you have no clue about building PCs, this is usually the toughest part but fortunately, boutique built gaming rigs are making it easier to bypass such problems. It’ such inclusions that really make the system more of a gaming desktop.

Moving on, the CyberPowerPC Battlebox Essential GLC5000CPG CPU works alongside its 16GB DDR4 memory to handle multitasking tasks. 16GB is plenty for general tasks but since editing video can eat up a significant amount of memory, we recommend getting 32GB DDR4 memory. On our tests, it managed to handle a dozen tabs open on YouTube without breaking a sweat.

As for storage, the 120GB SSD and 2TB Hard Drive is sufficient for most users. You can load software remarkably fast from the solid-state and store movies, data and multimedia on the 2TB hard drive. Everyone’s storage needs are usually different, but for general use and gaming, it should be sufficient.

Great but not the best GPU

With its raison d’être being a remarkable performance for gaming enthusiasts, media creators and designers the CyberPowerPC Battlebox Essential GLC5000CPG is a modern workhorse. It spots the Nvidia GTX 1060 6GBB graphics unit that’s a powerhouse for handling AAA titles. However, while it’s a great GPU, its caveat is that it doesn’t offer a powerful performance compared to the GTX 1080 and also doesn’t have SLI.

This is only a problem because most of its immediate competition at this price point and lower are equipped with Nvidia GTX 1080. If you’re like me, who is subscribed to “the more the merrier” school of thought, then you understand the Nvidia GTX 1080 takes the trophy here!

Nonetheless, the NVIDIA GeForce GTX 1060 6GB video card revealed its resilience and gaming power in our gaming tests. It managed to play some demanding games and still maintained high frames per second (fps). On many levels, it stacked well against high-end systems like the Alienware Area 51 PC. Here are some of the gaming tests run on 1440p, since this is an area the GTX 1060 goes head-to-head with its competition AMD Radeon RX 480:

These are very good results and enthusiasts will be able to squeeze the best performance out of the most titles. But they also indicate probable poor performance score on 3D and the very elusive 4K 60 frames per second target. Such performance might be a struggle for this GPU but a bit more consistent on the Nvidia GTX 1080 graphics card.

At its exorbitant price, this desktop as configured is not meant for the hardcore gamer because it lacks the Nvidia GTX 1080 GPU. For the most part, though, its target audience is media professionals, artists and enthusiastic gamers with the heart and wallet to spend the cash.

Every other component (except the Nvidia 1060) is top of the line, and performance almost at par with the very best. That makes gaming fast and interesting. Better yet, when you’re not gaming, the CYBERPOWERPC BattleBox Essential GLC5000CPG completely obliterates whatever tasks you throw at it.

If you need an expertly assembled gaming PC with slick features, the CYBERPOWERPC BattleBox Essential GLC5000CPG is a great choice to run to. Bear in mind that there are other desktops at this price range with similar class-leading performance, for instance, the iBUYPOWER Gaming PC Desktop 9200.

Update 10th Aug 2019: SInce the CYBERPOWERPC BattleBox Essential GLC5000CPG is no longer available on Amazon, we recommend checking out our next favorite Cyberpower PC desktop, the CyberpowerPC Gamer Xtreme GXiVR8500A desktop.