Asus has been the biggest OEM in the gaming PC segment with its republic of gamers line of pre-built gaming desktops. A lot of hardcore gamers prefer to buy individual components and build their own custom-built rig. Sadly, this can be a daunting and expensive exercise for non-technical gamers. The ASUS G11CD-DB52 Desktop gives you all the power you need to play your favorite games at decent refresh rates in a nice and affordable package.

In addition to the internals, the exterior design and case used for the ASUS G11CD-DB52 Desktop have all the aggressive and eye-catching visual elements that most gamers like. 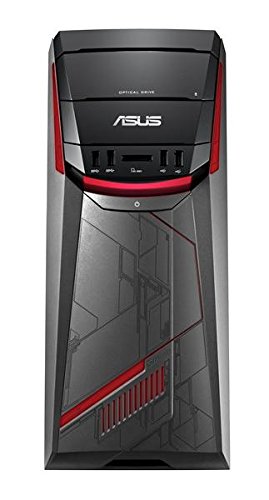 Powered by an Intel Core i5-6400 2.7 GHz and NVIDIA GeForce GTX950 2GB graphics, the ASUS G11CD-DB52 is an affordable dedicated gaming PC for the type of user playing mid-tier titles and light titles like Overwatch. This configuration also works great as an everyday high powered productivity desktop PC for the home office or dorm.

Republic of gaming desktops and laptops have been industry leaders for a long time. With the ASUS G11CD-DB52, you get exactly what you pay for a premium built gaming rig with all the bells and whistles one would desire from a desktop gaming PC. All this in a configuration that suits mid-tier gamers.

Our advice if you are in the market for this kind of PC is, go ahead and buy it.

At first glance, the ASUS G11CD-DB52 tower looks like an alien object that you would normally find in an alien movie. The pulsating light at the front and red LED lighting gives this gaming rig the aggressive looks that a high powered gaming PC should have. We can change the color on the front strip to as many colors as we can possibly imagine, you can make it pulsate or remain still.

However, the rest of the lighting cannot be changed from the default red theme on the ASUS G11CD-DB52 gaming PC. The internals is really not as pretty as the exterior. It’s easy to pop the lid by undoing a few screws for upgrades and maintenance. Generally, Asus didn’t put much emphasis on cable management and internal beautification as expected since this a non-tempered glass build.

As with its more powerful brother-the ASUS G11CD-DB72, there are a total of two open RAM slots on this motherboard that means we can upgrade the system to a maximum of 32GB. You also have the option to install an extra HDD for there is an extra empty slot on the motherboard and the GPU slot is upgradeable for newer  or more powerful ones like a RTX 1660 Ti or RTX 2080 should you consider changing along the road. However, running two graphics units on SLI isn’t possible on this motherboard.

Bundled with the ASUS G11CD-DB52 is a gaming keyboard and mouse. The keyboard is surprisingly nice for gaming on as the keys are responsive and have great travel. It features a unique design with LED strips on the sides, keys with red individual backlighting and an amazing analog dial for volume control at the top right corner.

The desktop comes with an Asus ROG Gladius mouse. We’ve purchased and used this gaming mouse before and its quite sharp and has amazing optical tracking. These peripherals are pretty decent and they allowed us to game with ease.

The NVIDIA GeForce GTX950 also provides its own display output connections i.e. one more HDMI port, one DVI port, and a Display port-the recommendation option if you want to output HD content to high-end G-Sync monitors at the highest refresh rates. Overall port selection on this ASUS G11CD-DB52 is more than we could ask for.

The ASUS G11CD-DB52 comes with both Ethernet and wireless 802.11 ac connectivity options. This desktop computer also has a built-in Bluetooth 4.0 module. As you can tell, this gaming PC has all the quarters covered when it comes to connectivity. Most desktops PCs tend to come without Wi-Fi and Bluetooth connectivity.

The brain of the ASUS G11CD-DB52 is a Skylake based Intel Core i5-6400(6th Generation architecture- Intel H110). This chip has a base clock speed of 2.7 GHz and turbo speeds of up to 3.3 GHz. Skylake based chips introduced significant power efficiency and video decoding and encoding upgrades.

The Core i5-6400 on this gaming PC was one of the flagships favored by mid-tier gaming desktops and high-end business computers due to their multiple processing capabilities, low power consumption, and thermal management.

The ASUS G11CD-DB52 has NVIDIA GeForce GTX950 2GB dedicated graphics and 8GB DDR4 physical memory expandable up to 32GB on the DDR4 LONG-DIMM slots available on the motherboard. Internal memory is ample as we get a single 1TB SATA drive spinning at a decent 7200RPM. As mentioned in the beginning, we don’t get fast SSD storage but luckily, it can be installed separately on this motherboard when needed.

We believe playing most games at 60fps is the sweet spot for most average gamers out there including us! The ASUS G11CD-DB52 hooked to a decent G-sync or FreeSync monitor handles most modern and older titles comfortably at over 62fps. Games tested include; Doom, Overwatch, GTA, FIFA 15, Dirt rally and COD. All these titles were played at 1080p on high settings and frame rates were around the 56fps to 65fps range.

Overwatch actually played at over 80fps on very high settings. Lighter E-sports titles can be given the ultra-treatment and still maintain decent 70 to 100 fps on the ASUS G11CD-DB52.

This configuration is really great for users considering jumping into serious PC gaming without breaking the bank. The ASUS G11CD-DB52 also provides enough upgrade options making it future proof. We can actually run a GTX 1070 or 1080 on this motherboard without upgrading the Power supply.