If you fancy the whole thinnest, lightest, toughest sort of gold runs, the Acer Swift 7 SF713-51-M90J definitely conquers its way into that list. It’s definitely not the toughest, neither is it the lightest, but it sure is the thinnest right after beating HP Spectra 2016 by a whisker- but of course at a price. If you are looking for a thin, noiseless, lightweight and aesthetically beautiful laptop that’s got it going in all the right places, then you ought to check this out. 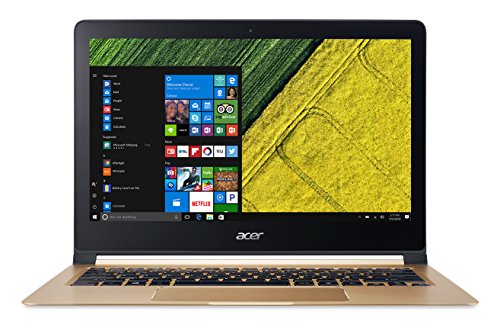 The Acer Swift 7 SF713-51-M90J is an excellent ultrabook with impressive specs, looks and good performance to go with it. And to crown it all, it’s as thin as it gets.

The Acer Swift 7 does indeed make the cut when it comes to slimness. Although eyeballing it won’t raise any Eureka moments (Aha…I see the light), it is the thinnest laptop in the world as at now. It managed to beat the HP Spectre 13 with a whisker, though the difference is scarcely noticeable with the naked eye. Its designers managed to shed off a few millimeters from the HP Spectra X360 design to a mere 0.39 inches / 9.98 mm.

So what exactly is the price Acer paid for its crown?

No, the price wasn’t so much in heat sinking. While Thermodynamic design becomes hell with reduced thickness, and that made worse when you go fanless, Acer pulled that off quite well. However, there are a few caveats with that statement. The real tradeoff came with the processor. The processor of choice for the Acer Swift 7 SF713-51-M90J is the Intel Core i5-7Y54 processor, which is a 7th Gen 7.5 W processor.

It consumes almost half the power of an ordinary Core-i5 processor, producing less heat in the process. Of course, the less heat produced the better, especially when it comes to a super-thin laptop. So that’s a good thing. The downside though is that it performs poorer than other processors in the same category. We’ll talk about that as we move along.

When it comes to looks, the Acer Swift 7 SF713-51-M90J easily beats the better part of its competition. It’s got a machined aluminum body, that’s black on the top and bottom, with gold interior. The black exterior and the fairly stiff aluminum body make it feel quite solid and premium. The aluminum body does flex when torsion force is applied to the main body of the machine, but we think the level of flex is not so bad. Screen flex is also down to a minimum.

While Acer chose to go all aluminum on this, Dell and HP went a different route with the Dell XPS 13 and HP Spectra 13 rather picking a carbon fiber interior that’s more rigid than aluminum. Acer decided to stick to the traditional clamshell model of laptops, so no yoga here!! … But the good thing is, they got it right. If it ain’t broke, don’t fix it … and that goes for the hinges. 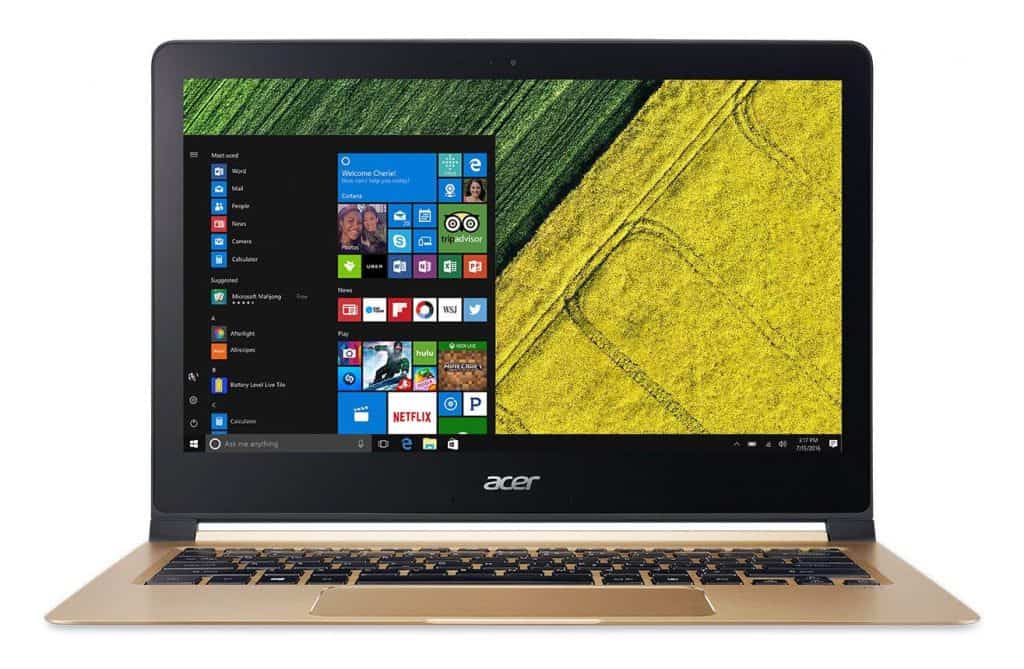 Nothing out of the ordinary, but they work out quite well with no screenplay at all. HP went a little advanced on this, with more pristine looking hidden hinge design in the HP Spectra 13. The corners of the Swift 7 are tapered smoothly around the corners, with a groove at the front of the machine for easy opening of the lid.

With a 13.3” In-plane Switching [IPS] display with 1920 x 1080 pixel, the display quality and brightness is quite alright. The 1080p is just fine for a 13’’ display, though it would have been nice to have an option for higher resolution. Viewing angles are as usual great with IPS panels, though the glossy finish is glary due to its high reflectivity. Finally, the Corning Gorilla glass toughens up the screen to scratches and direct impact, which is also a plus.

The port selection in the Acer Swift 7 SF713-51-M90J is a little disappointing though. It’s got two USB Type-C ports and an audio/microphone combo only. While the USB 3.0 Type-C ports are alright, they’re only two … and you need an adapter to use even more pedestrian USB Type-A gadgets that are in most devices as of today, which is quite cumbersome. In addition to that, only one of the two USB 3.0 ports is capable of carrying a display port signal!!

At least Acer didn’t leave you to bear the whole brunt of buying all these new adapters alone, they give you two adapters to start you off – an HDMI and USB Type-A adapter which comes with the package. From there you can further purchase additional external USB adapters with multiple USB Type-A (USB 2.0, 3.0, 3.1) ports to give you more room for more plugging in more devices.

The Power brick is also USB based and can be used with either of the two USB Type-C ports. Also, you can use the USB 3.0 ports to connect to your printer and HDMI to your external monitor setup.

The Acer Swift 7 SF713-51-M90J also comes with 2 X 2, 802.11ac with MU-MIMO technology. This is a new fairly new technology that has featured primarily in Acer laptops, and a few other brands at the moment. The Multi-User – Multi-Input and Multi-Output Technology (MU-MIMO) is a break from SingleUser – Multi-Input and Multi-Output Technology (SU-MIMO) commonly used today, which enables your device to receive download data seamlessly from the one single wireless router even when there are several devices to be served by the same router.

While a SU-MIMO enabled router takes turns to serve each device, with MU-MIMO the transfer is seamless (2 X 2 – Two streams of data in either direction) and can take place simultaneously to several devices. This, in turn, means faster transfers – up to 3 times the normal speed, easily in excess of 30 MB/s. However, you will need an MU-MIMO to enable Wi-Fi router to enjoy this. While this is a great thing, it is as at now only going to future-proof your machine – that is until you acquire an equivalently enabled router.

The Acer Swift 7 SF713-51-M90J comes with a standard keyboard with chicklet keys. The spacing is great and the vertical travel is deep. The keys require a little more force to press down but that does not come in the way much. The arrow keys are well spaced, at least addressing the concern over the many keys that are placed close to them which makes it hard to autonomously find them without having to look.

Generally, they offer quite a pleasant typing experience. The only downside here is that there is no backlight. Now, that’s simply disappointing especially considering the hefty price tag.

Now to the main feature – that’s according to me. The touchpad is nothing short of glorious, and that is, to say the least. Its crazy size matches the HP Spectra 13, a cool 5.5” X 2.5” inches and supports multi-gesture movements and palm muting. It is slightly sunken with curved corners and no keys. Scrolling and zooming are quite smooth and present no problem whatsoever.

Now to the main feature – that’s according to me. The touchpad is nothing short of glorious, and that is, to say the least. Its crazy size matches the HP Spectra 13, a cool 5.5” X 2.5” inches and supports multi-gesture movements and palm muting. It is slightly sunken with curved corners and no keys. Scrolling and zooming are quite smooth and present no problem whatsoever.

Acer Swift SF713-51 comes in only one configuration as on writing these articles, which is an 8GB RAM, a 256GB SSD and a Core-i5-7Y54 processor.

Now to the hardcore stuff. As was mentioned earlier, its 4.5 W Intel U-Class Core i5-7Y54 CPU, for the most part, isn’t a speed demon, but there are a couple of things it is. For one, it gives better battery consumption while venting out less heat. However, when we come to the hardcore number crunching and graphics, its performance falls anywhere between 25% – 35% behind a regular Core-i5 processor such as the6200U used in HP Spectra.

When it comes to daily use, it’s quite capable of performing most tasks. With such a processor, Acer was able to squeeze a 42 Wh battery into the machine, which pulls little over 7 hours under medium to light use. However, this time falls to 5 hours with heavy use. While it can handle light gaming, you don’t expect to go very far with that.

It’s got a 256 GB SATA3 Solid State Drive (SSD), which is a downgrade from its competitor, the HP Spectra which houses a 256 GB PCIe SSD. However, it’s not too big an issue. The SSD enables the machine to boot up in a matter of seconds, and run generally faster.

An Intel integrated processor is housed within the Acer Swift 7 SF713-51-M90J, whose performance leaves little room for criticism in terms of graphics. The two speakers placed on either side of the machine, on the other hand, leave a lot to be desired. They are okay below the 50% of the maximum volume mark, but above that a little distortion is noticeable.

They could use some improvements in my opinion. Having external speakers could easily address this issue.

When it comes to noise, the Acer Swift 7 SF713-51 is practically noiseless. The temperatures do get warm to the touch but not too warm to be uncomfortable.

The Acer Swift 7 SF713-51-M90J is for the better part quite impressive. Its thin elegant aluminum body and pristine black – gold finish coupled with the excellent display and fanless design drive it smoothly to the top of the list of machines that spell out finesse. However, it does come with a few things that drag it down a little. Its choice processor while having its advantages, does make the machine a little slower than its counterparts in the same category.

In addition to that, the keyboard would really do better with backlight, and the port selection wasn’t that good. A few more ports and would be a plus. The batter too could use a little boost: I personally wouldn’t mind a slightly heavier machine but with far better battery runtime.

The Acer Swift 7 SF713-51-M90J is by most standards a great machine worth due consideration on your part.