The Acer Predator Helios 300 PH315-51-78NP is a muscular mid-range gaming laptop designed for speed and productivity. It packs a Coffee lake processor coupled with an Nvidia GeForce GTX 1060 graphics card that enables it to push impressive frames per second fps in gaming. Aside from an affordable price point, you get a few more perks such as great build quality (with gamer aesthetics), decent speakers, long battery life, an ample amount of ports, and a comfortable keyboard.

We easily recommend it as Our Editor’s Choice for mid-range budget gaming laptops.

We’ve known Acer for its crazy gaming laptops and heftily prized rigs such as the monstrous Predator 21X and sleek Predator Triton 700. But Acer hasn’t stopped there. They are now taking the battle to the notebook space by loading them with extravagant features and powerful gaming hardware. The Acer Predator Helios 300 PH315-51-78NP we review today doesn’t sit pretty and harmless. It wears the whole gaming suit as a straightforward, no-nonsense gaming laptop and for an affordable budget price. Inside you’ll find a Core i7-8750H processor and a GeForce GTX 1060 graphics card.

It’s not the perfect gaming laptop either. The Acer Predator Helios comes with a few wrinkles here and there. If you can overlook it’s slightly dull display the machine ticks all the right boxes and cost just right for a gaming laptop. In this review, we break its performance down to find out how it stacks against the competition.

Acer offers the Acer Predator Helios 300 PH315-51-78NP laptop in either a 15-inch or 17-inch screen. In this review, we talk about the 15-inch iteration. If you’ve ever laid your eyes on the Asus TUF FX504G (FX504GE-ES72), this Predator 300 shares a similar appearance to it. The chassis is angular around the edges and the case wears a mostly black colored finish embellished with red accented muscle lines.

The LCD frame and bottom are made of plastic while the lid and palm rest shiny polished aluminum giving off a more premium look. Turning the laptop on its rear side reveals a plastic exhaust with red accents as well. As if not enough, the keyboard is backlit in red and the touchpad outlined in red for the sake of visibility. Clearly, the red and black color scheme is a common theme that you’ll have to get used to.

Sandwiched between the thin bezels is a 15.6-inch In-Plane Switching (IPS) display. The display has a native resolution of 1920 x 1080 and a matte finish which helps fight against reflections. That means even in brightly lit rooms or outside under direct sunlight, you won’t get a lot of glare from the display. Also, thanks to the IPS panel, viewing angles are good. If you game in a group and usually have spectators cheering you on as they watch over your shoulder, viewing angles will be great. 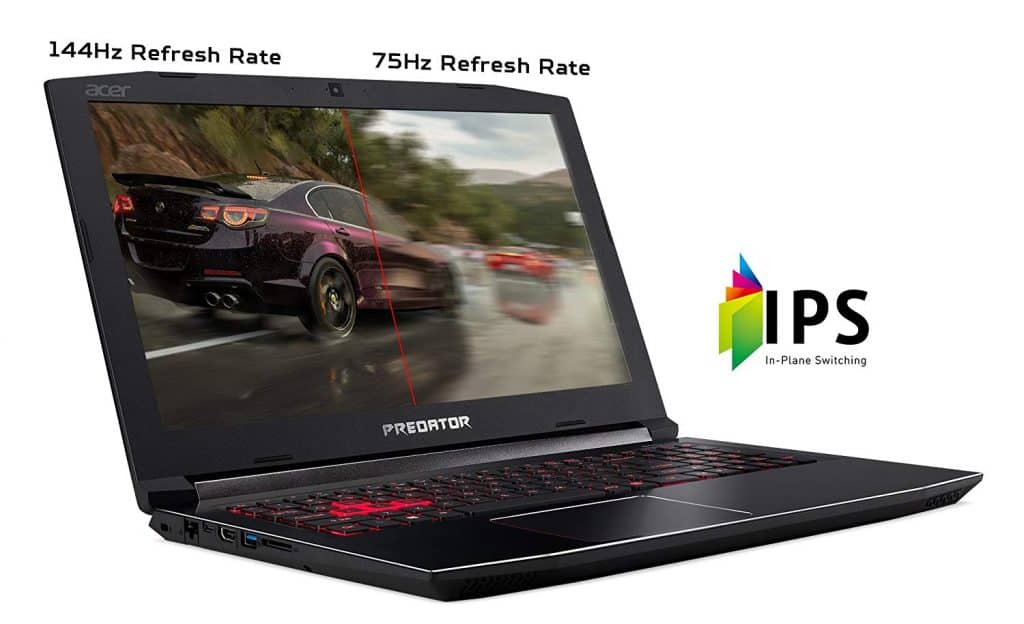 Still, on display, we happily welcome the 144Hz refresh rate that the Acer Predator Helios 300 comes in. Considering 60 Hz is the standard for most machines, the 144Hz is really great and mostly exclusive for pricier laptops. At 144Hz, the Predator 300 can manage to deliver more frames per second, especially in instances where the hardware is capable of pushing that high.

The screen brightness measured 300 nits which is slightly dimmer than our category average of 350 nits. That leads to images looking a bit too dull which isn’t great for viewing experience. The Strix (269 nits) and the Leopard Pro (245 nits) are a bit duller though. Finally, there is no G-sync included on this laptop, like G-sync included in the HP Omen 15. But it’s not such a big tradeoff.

We appreciate Acer’s efforts of placing plenty of ports on the Helios 300. There are more than enough ports to connect all your favorite devices. Thankfully, that’s including a futuristic USB Type-C port to keep your laptop valid for a few years. It’s a nice touch that you don’t get to see often in this price range. The left side holds the bulk ports including an Ethernet jack, a USB Type-C port, HDMI output, a USB 3.0 port, and an SD card slot. The HDMI comes in handy should you ever need to connect to an external monitor.

Meanwhile, a headphone jack and a pair of USB 2.0 ports are located on the right side of the laptop.

Other connectivity options include 802.11ac Wi-Fi and Bluetooth 5. Acer incorporates a two-year warranty that is standard across all Acer Predator laptops.

Under its belly, the Acer Predator Helios packs an awful amount of punch. It’s armed with a 2.8GHz Intel Core i7-8750H processor, 16GB memory, 256GB Solid-state drive, and an Nvidia GeForce GTX 1060 graphics chip. That suggests to a well-balanced machine that would be able to handle anything you throw at it. But we’ll cover memory and storage later. The Core i7-8750H processor is a six-core processor with a 2.2 GHz base clock speed and 4.1 GHz (4 GHz with 4 cores, 3.9 GHz with 6 cores) and can execute up to twelve threads simultaneously thanks to Hyper-Threading.

Thanks to that, it has more than enough juice for some serious multitasking. You can have up to 30 open tabs in Chrome while watching a 1080p stream on Twitch and listening to music in the background.

The two extra cores bring in an increased performance of 50%. Also, single-core performance improves making this processor suitable for demanding applications and games. Thanks to this, the Predator Helios 300 put to task, is a powerful machine that’s cool under pressure and generally feels snappy.

Since the Predator Helios 300 is built as a workhorse for video editors, creative professionals, and gamers, it requires to handle plenty of demanding tasks at ago. That translates to plenty of memory to handle such workloads as well. Acer continues its winning streak thanks to ample memory. You get 16GB DDR4 memory which is more than sufficient for the above tasks and more. Well, you can also upgrade the GB memory to handle more intensive workloads but as it is, it should handle less demanding tasks like word processing and web browsing with aplomb.

As far as storage is concerned, the 256GB solid-state drive is fast enough to keep boot-up and loading times reasonably snappy. Since this configuration came without a hard drive storage option, you will have to save your most important files and games. That’s because the amount of storage is not enough for large storage.

A good graphics card makes a gaming laptop versatile and so does the NVIDIA GeForce GTX 1060 graphics chip. Thanks to the GPU, the laptop tops the board on benchmark tests, gaming runs, and general applications. If you get involved in web page rendering, business productivity applications, digital media creation work and anything in between, the GTX 1060 perfects performance there. Moreover, the combination or the six core/12-thread Intel Core i7-8750H and GTX 1060 graphics card is lethal and pushes for better performance in 1080p gaming, multimedia crunching, and productivity tasks.

To say the least, this system runs at its best at 1080p resolution on AAA games. On Far Cry 5 it managed an average of 74 fps at Normal settings and 63 fps on the more demanding Ultra preset. On Rise of the Tomb Raider, it managed a higher 82 fps at medium settings and 68 fps at Very High settings. For both cases, that translates to smooth frame rates. It proves that the Acer Predator Helios 300 is better versed at 1080p gameplay.

If your taste buds flinch on high resolutions above 1080p (while maintaining frame rates at 60 fps or better), then you should be willing to cough up some more money for a configuration with the GeForce GTX 1070. That along with a higher resolution screen might get you the results you need. The Alienware Area 15m R2 is a great fit here bringing to the table an Intel Six-Core i7-6800K, 16GB of RAM, 2TB 7200RPM mechanical hard drive coupled with 256GB SSD and NVIDIA GeForce GTX 1080 8GB GDDR5X graphics card (although for more than $2000)

Acer ticked all the right boxes with the keyboard making it comfortable and responsive. The individual keys come with a 1.6 mm vertical travel which is above our 1.5 average. The keys also require 79 grams of actuation force which translate to light and clicky keys. It should take you a long learning curve to get used to the pressure after which you should be able to type fast. I managed 106 words per minute on the typing test, which is usually 101-113 wpm with a 3% error range.

Elsewhere, the keys are backlit which helps when gaming in a dark room. However, you can change the colors or control them as it doesn’t have full RGB lighting.

The 4.1 x 3.0-inch touchpad is as spacious as I’d want it to be. Add accurate and responsive to Windows 10 gestures and you’ve got yourself an awesome touchpad. We had no qualms with pinch to zoom, swiping Windows away among other gesture controls. Either way, we recommend getting a dedicated gaming mouse for shooter games and games and workloads that require higher precision.

There’s so much to love about the Acer Predator Helios 300 PH315-51-78NP as it’s one value laptop. Above all else, you’re paying for a powerful Intel Core i7 Coffee Lake processor, GeForce GTX 1060 graphics chip, plenty of memory and storage. You also get a pretty decent build quality that’s the envy of competition it this price range.

If you’re looking for an affordable laptop that can double up as a productivity platform and a gaming laptop, the Predator Helios fits the bill. It handles AAA titles and VR gaming just as well as it does web browsing, office productivity, and photo editing. We easily recommend it as our Editor’s Choice for budget midrange gaming laptop.

Also, while the market is filled with alternatives at this price point, the Helios 300 remains our choice for having simpler, cleaner look and for bringing a stronger fight to the war room. It’s packed in a nice package that won’t break your back or your wallet.